Need a book from the UC Berkeley Library during the shelter-in-place order? Check here first. 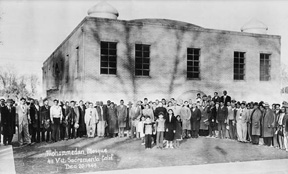 All of the material in the exhibit not otherwise credited is drawn from the South Asians in North America collection, an archive of journals, books, manuscripts, photographs, letters, and other primary material documenting early South Asian immigration to North America. The collection, currently housed in the South/Southeast Asia Library, is an important record of California history and will be transferred to the Bancroft Library at the end of the exhibit.

In assembling the exhibit I was greatly assisted by the "Pioneer Asian Indian Immigration to the Pacific Coast" webpage created by Tejinder Sibia at the University of California, Davis and the "Roots in the Sand" webpage created by Jayasri Hart. I would also like to thank Sandy Taugher from the State of California Resource Center, for the care she put into duplicating the photographs from Angel Island. Special thanks to Gurinder Singh Mann for the loan of the picture of women from the community in the Stockton Sikh Temple. For careful reading of the catalog manuscript and invaluable suggestions, I gratefully acknowledge Hamida Chopra, Karen Leonard, Gurinder Singh Mann, Elliot Porter, Steven Poulos, and Jane Singh. This exhibit would not have been possible without the research of Jane Singh, Donald Hausler, Leela Rai and many others that went into the preceding exhibits "People of South Asia in America," 1985, Oakland Museum, and "A Continuous Journey: The Punjabi Experience in the Sacramento Valley," 1996, Community Memorial Museum of Sutter County. For help with the physical exhibit, I would like to acknowledge Cathy Dinnean and Heather Nicholls; for design of the print catalog and tinting of the cover photography, Mary Scott; for design of the virtual exhibit, Vanessa Tait; and for the K-12 interface to the virtual exhibit, Rebecca Darby-Williams. Sincere thanks to the Global Migration Project of the Research Libraries Group for support in digitizing the images from the South Asians in North America collection, as well to the Library and the Center for South Asia Studies at the University of California, Berkeley, who have generously supported the exhibit and exhibit catalog. -- Suzanne McMahon, curator