Articles & Other Writings About Music: Home

Don't Look for Articles in OskiCat!

Articles published in music periodicals and essay collections in music are not listed in OskiCat, the UCB library catalog. To find these writings one must use music literature indexes. The Library at Berkeley offers three major online indexes devoted to current music literature as well as two retrospective indexes. These indexes differ significantly, from the number and types of sources covered to the way they describe and present citations. Although each index, listed below, has an area of relative strength—Music Index, for example, is strongest in the field of music education, IIMP in performance topics, and RILM in musicology—thorough research involves checking more than one when looking for article citations and other literature on music.

RILM Abstracts of Music Literature (1967-present) provides broad, international coverage of scholarly writing on music, including periodical articles, books, essays in collections, dissertations, videos, conference proceedings, dissertations, ethnographic recordings, reviews and more. Comprehensive coverage includes music-related articles published in conference proceedings from 1835 through 1966; articles in Festschriften celebrating music scholars from 1840 to 1966; and articles in anniversary volumes published in honor of musicians, composers and institutions dating back to the 18th century.More recent citations do not include abstracts. Available in printed form in the Reading Room at ML1.R14. Updated monthly. UC access only.

Music Index Online covers more than 650 international music journals, primarily English language sources. Citations, covering from 1979 to the present, do not include an abstract. Updated quarterly. Available in printed form, covering 1949 to the present, in the Reading Room at ML13.M7. UCB access only.

Music Periodicals Database. Formerly known as IIMP, Music Database covers a broad cross-section of music periodical sources, from the most scholarly studies to the latest trends, including classical music, pop and popular music, rock, rap and hip-hop, blues, jazz, traditional and folk music, world music, music equipment and technology, recording techniques and technology, and the music, radio, and music video industries. Indexes more than 380 music periodicals (50 in full-text) from over 20 countries, including feature music articles and obituaries appearing in The New York Times and The Washington Post. List of periodicals indexed. Retrospective indexing for more than 165 titles, but without subject access or abstracts. Indexing for some periodicals begins with 1990. Entries from 1996 forward include an abstract. Updated quarterly. UC access only.

JSTOR. The Music Collection in JSTOR (Journal Storage: The Scholarly Journal Archive) contains the complete back runs of 32 titles dedicated to scholarly research and theory in the field of music, including journals published in the Netherlands, Croatia, Hungary, Germany and France. Back runs end at a so-called "moving wall," representing the time period between the last issue available in JSTOR and the most recently published issue of a journal. The "moving wall" is specified by publishers in their license agreements with JSTOR, and generally ranges from 3 and 5 years. UC access only.

Once you've searched an index to find articles, you may need to use UC-eLinks to link to a PDF or html file if the full text is not immediately available. Each database is a bit different, but a good rule of thumb is this: when you see the UC-eLinks icon, click on it to view your article access options, which can range from full text to a call number to an Interlibrary Loan request: 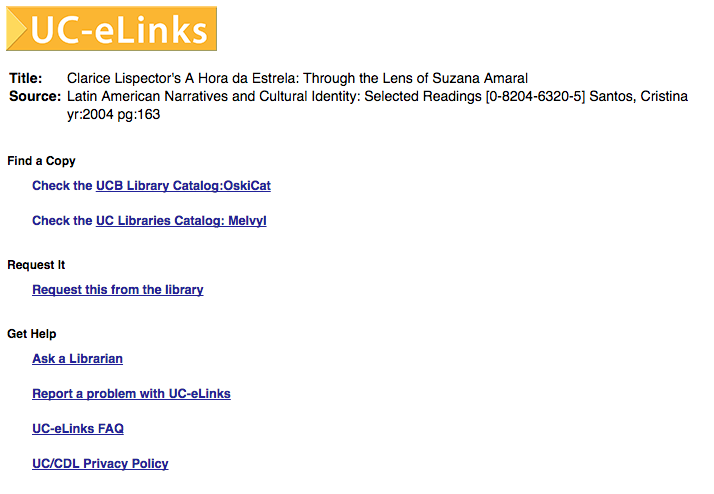 In addition to the full-text articles from subscription sources listed above, a number of academic journals are freely available online. These e-journals usually have no print equivalent. Relatively few of such e-journal titles, however, have their contents included in the music article citation indexes discussed above—though the number is increasing—and few appear in library catalogs such as OskiCat. Articles in music e-journals are thus difficult to access in comparison to those in traditional print sources or even print sources with electronic, full-text delivery.

eJournal titles of interest in the fields of ethnomusicology, historical musicology, and composition—distributed via the Web, with back issues also available online (i.e., 'zines and commercially oriented publications are excluded), and all or substantial portions of the journal content of each is freely accessible (i.e., sites do not simply represent advertising for a print edition of the journal)—may be found by browsing DOAJ, the Directory of Open Access Journals, featuring free, full text, quality controlled scientific and scholarly journals, covering all subjects and many languages.