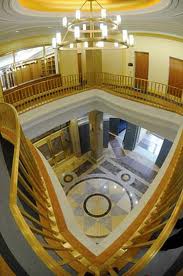 The Bancroft Library  is the primary special collections library at the University of California, Berkeley. One of the largest and most heavily used libraries of manuscripts, rare books, and unique materials in the United States, Bancroft supports major research and instructional activities and plays a leading role in the development of the University's research collections.

The Bancroft Collection of Western and Latin Americana

Hubert Howe Bancroft, a bookseller, publisher, historian and collector gathered materials related to the history of California and The American West in the 19th century. These materials form the nucleus of The Bancroft Library, which has continued to collect, with great energy, printed and manuscript material relating to the history of western North America, from the western Great Plains to the Pacific Ocean and from Alaska to Panama. The greatest concentration of material relates to California and the West Coast, as well as Mexico and Central America, which are collected intensively to the present. The history of most other Western American states is collected up to 1900, except such broad, overlapping issues as water and the environment, which are collected without regard to date. Also represented are early Pacific voyages of exploration and discovery; continental expansion west of the Mississippi, including the Louisiana Purchase, fur trade, overland journeys to the West; Hawaii and the Philippines, British Columbia and the Yukon. In addition to books and manuscripts, the Bancroft Collection, as it has come to be called, includes maps, newspapers, photographs and other pictorial documentation, microfilms of original documents in private hands and in foreign archives, and other materials. For more detailed information see:

Reference questions can be directed to: bancref@library.berkeley.edu

What Else Does Bancroft Collect?

In addition to the Western and Latin Americana Collections, The Bancroft Library is home to: