Who pays for science?
Most scientific research is funded by government, companies doing research and development, and non-profit entities. Because science is attempting to get at some "truth," the source of research funding shouldn't have a significant effect on the outcome of scientific research, right?
» Read Industry sponsorship and research outcome Cochrane Database Syst Rev. 2017 Feb 16;2:MR000033).
» Read Food Politics, a blog by Marion Nestle that often addresses the issues of industry sponsored research.

Is it race? or is it racism?
Race is a sociological construct, yet most articles describing racial disparities ascribe them to race, not to racism.
» Read NIH must confront the use of race in science (Science 2020;369(6509):1313-1314).

Peer review
Peer review refers to a process whereby scholarly work (ie, an article) is reviewed and critiqued by experts to ensure it meets some standards of acceptance before it is published.
Does this process make for better science?
» Read Editorial peer review for improving the quality of reports of biomedical studies (Cochrane Database Syst Rev. 2007 Apr 18;(2):MR000016).

This article (PDF) discusses the "manufactured uncertainty" created by industry groups that sponsor research and publishing on chemicals.

Is qualitative research "evidence"?
» If your goal is to understand beliefs and meanings in the group with whom you are working, then qualitative studies can be important.

Reliability and validity
Reliable data collection: relatively free from "measurement error:"
» Is the survey written at a reading level too high for the people completing it?
» If I measure something today, then measure it again tomorrow using the same scale, will it vary? Why?
Validity refers to how well a measure assesses what it claims to measure:
» If the survey is supposed to measure "quality of life," how is that concept defined? Is it measurable?
(Adopted from Chapter 3, Conducting research literature reviews : from the Internet to paper, by Arlene Fink; Sage.)

In any discussion of journal, article, or author metrics, it is imperative to remember Goodhart's law:
"When a measure becomes a target, it ceases to be a good measure."

» Scopus CiteScore metrics: Click “Sources" - An alternative to the JIF.

PLoS, a top-tier open access suite of journals, says this: "PLOS does not consider Impact Factor to be a reliable or useful metric to assess the performance of individual articles. PLOS supports DORA – the San Francisco Declaration on Research Assessment – and does not promote our journal Impact Factors."

In addition, citation counts themselves are not necessarily a good metric of importance; see How citation distortions create unfounded authority: analysis of a citation network. Greenberg SA. BMJ. 2009 Jul 20;339:b2680. doi: 10.1136/bmj.b2680.

Finally, one could argue that journal impact factor manipulation is a trait of predatory journals.

The "Evidence Pyramid" is a graphic representation of strength of evidence of various publication types. A typical evidence pyramid looks like this: 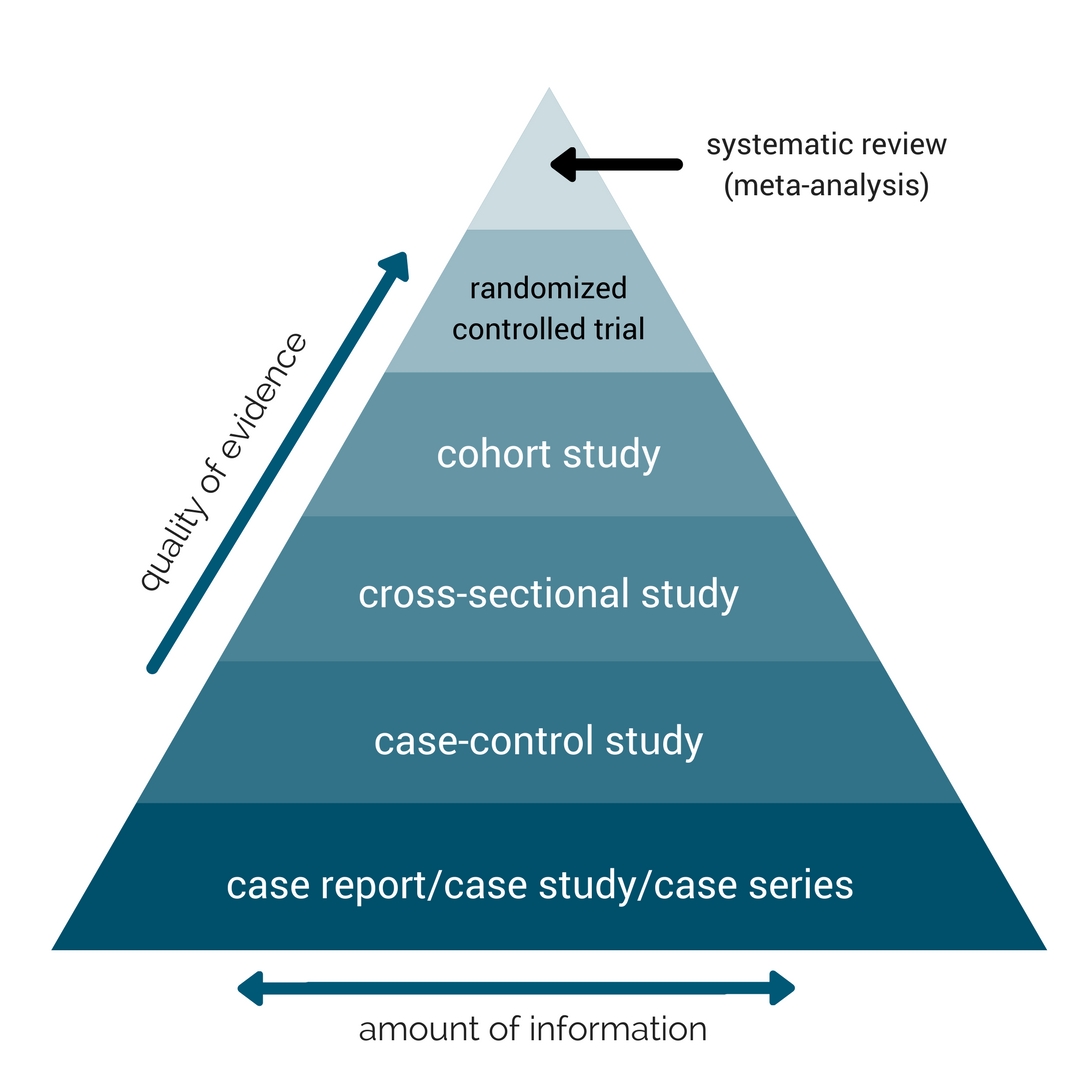 However, recently a modified evidence pyramid has been proposed, which looks like this:

When you encounter any kind of source, consider:

Use these questions to help decide whether a source is a good fit for your research project.