On the Same Page 2019: There There: The Exhibit at Moffitt Library

The exhibit cases are opposite the elevators on the 3rd (main) floor of Moffitt Library (hours).

Cal ID is required for entrance to Moffitt. 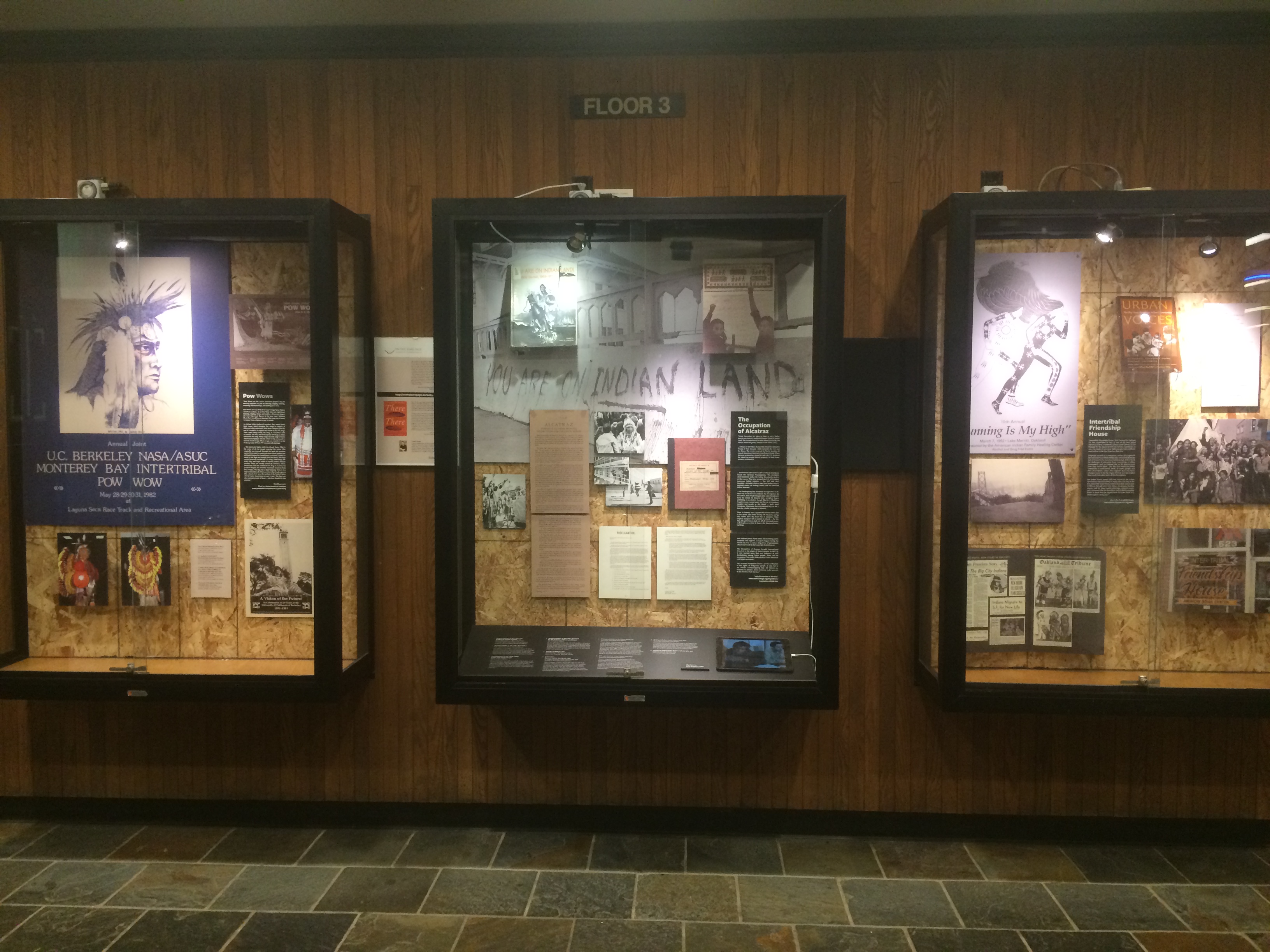 Proclamation:  To the Great White Father And All His People

“Part of a band of Native Americans look over the main cell block of Alcatraz in San Francisco, Nov. 19, 1969 after occupying the island for the second time in two weeks. The Indians say they want the island for a new center to replace a San Francisco building destroyed by fire recently. The general service administration asked the Indians to leave but threatened no immediate action.”

“Sioux Native American Bear Regrets presents peace pipe to the four directions in a prayer to Wakan-Tanka, The Great Mystery God, during a press conference on Alcatraz Island in San Francisco on May 31, 1970. At the right is the Native American declaration to return to their land. The Alcatraz pow-wow, open to whites for the first time since Thanksgiving, attracted many sympathizers attending the Indian Liberation Day meeting. The Native Americans stated that they are determined to stay on the island despite the cutoff of electricity and water by the Federal Government. “

“Using the exercise yard of Alcatraz, some of the Indians who invaded the Island, get in their exercise by skipping rope in San Francisco on Nov. 19, 1969. The band of American Indians made the second invasion of the Island in two weeks, pushing their demands for Alcatraz for use as an Indian Center. “

“Intertribal Friendship House (IFH) located in Oakland, CA was established in 1955 as one of the first urban American Indian community centers in the nation. It was founded by the American Friends Service Committee to serve the needs of American Indian people relocated from reservations to the San Francisco Bay Area.

Originally created as a community center, IFH expanded into social services when staff became concerned about the lack of resources for American Indian people as they faced the challenges of relocation from reservations to urban communities such as Oakland due to the displacement from their native lands.  The Bay Area American Indian community is multi-tribal, made of Native people and their descendants—those who originate here and those who have come to the Bay region from all over the United States and from other parts of this hemisphere.

For urban Native people IFH has served as the Urban Reservation and Homeland. In many cases it is one of the few places that keeps them connected to their culture and traditions through pow wow dance, drumming, beading classes, and the many social gatherings, cultural events, and ceremonies that are held there. Intertribal Friendship House is more than an organization. It is the heart of a vibrant tribal community.”

The Occupation of Alcatraz

The Occupation of Alcatraz

...Indians of All Tribes claimed the island by citing the Treaty of Fort Laramie (1868) between the U.S. and the Sioux. The treaty returned to Native peoples all retired, abandoned and out-of use federal lands. When Alcatraz penitentiary closed in 1963, the U.S. declared the island as surplus federal property. So Red Power activists reclaimed it.

...To announce their action to the world, the dissidents issued the “Alcatraz Proclamation. ” The occupiers cited treatment under the Indian Termination policy as the reason. They also accused the U.S. of breaking numerous Indian treaties.  … The IAT intended... to build a Native American Studies center, spiritual center, an ecology center, and an American Indian Museum.

...On Thanksgiving Day, hundreds of supporters made their way to Alcatraz to celebrate the Occupation. In December, John Trudell began daily radio broadcasts from the island. In January 1970, occupiers began publishing a newsletter.  Joseph Morris, a Blackfoot longshoreman, rented space on Pier 40 to transport supplies and people to the island…. Celebrities…[visited] the island in support… Rock band Creedence Clearwater Revival donated $15,000 for a boat for reliable transport to Alcatraz.

Then, in January 1970, 13-year-old Yvonne Oakes fell to her death. The Oakes family left Alcatraz, saying they didn't have the heart for it anymore. Some original occupiers left to return to school…. By late May, the government had cut off all electrical power and telephone service. In June, a fire destroyed many  buildings.

Left without power, fresh water, and declining public sympathy and support, occupiers began leaving the island. On June 11, 1971, a large force of government officers removed the last 15 people from Alcatraz.

The Occupation of Alcatraz brought international attention to the plight of Native peoples in the U.S. It also sparked more than 200 instances of civil disobedience among Native people. Some call the occupation  "The cradle of the modern Native American civil rights movement."

The Alcatraz Occupation led to a yearly celebration of the rights of indigenous people. It also led to the island's "UnThanksgiving Day." All visitors are welcome to attend a dawn ceremony under permits by the National Park Service.

--excerpts from Nativevillage.org “1969 Occupation of Alcatraz”

“Pow Wows are the Native American people’s way of meeting together, to join in dancing, singing, visiting, renewing old friendships, and making new ones.

Pow Wows are one of the best ways to experience Native American culture.  At a Pow Wow you can experience dancing, singing, foods, and crafts. Powwow singers are very important figures in the pow wow. Without them there would be no dancing. The songs are of many varieties, from religious to war to social.

As various tribes gathered together, they would share their songs, often changing the songs so singers of different tribes could join. With these changes came the use of “vocables” to replace the words of the old songs. Thus, some songs today are sung in “vocables” with no words.Yet they still hold special meaning to those who know the song. Many songs are still sung in Native American Languages either newly composed or revivals of old songs. These songs are reminders to the Indian people of their old ways and rich heritage.

The powwow begins with the Grand Entry. This is the entry of all the people entering the arena. This originally was a parade through the town the powwow was in. Even today in some powwows, these parades are still held. During the Grand Entry, everyone is asked to stand as the flags are brought into the arena. The flags carried generally include the U.S. Flag, Tribal Flags, the POW Flag, and Eagle Staffs of various Native Nations present. These are usually carried by veterans. Native Americans hold the United States Flag in an honored position despite the horrible treatment received from this country. The flag has a dual meaning. First, it is a way to remember all of the ancestors that fought against this country. It is also the symbol of the United States which Native Americans are now a part. The flag here also reminds people of those...who have fought for this country.”

--PowWows.com: What is a Native American PowWow