The Court Fee and Revenue Stamps of the Princely States of India is a a gift collection of stamps, each including a state name, a tax classification, and a tax amount.

Before India's independence from Britain in 1947, Indian princely families collaborating with the British ruled nearly half of the Indian subcontinent. As early as 1797, the British issued the Court Fee and Revenue Stamps of the Princely States of India to collect taxes from Princely State residents.

Echoes of Freedom: South Asian Pioneers in California, 1899-1965 is an exhibit created from Azadi di Gunj (Echo of Freedom), an early collection of Indian nationalist poems calling for a revolt against British rule in India, published in San Francisco by the Pacific Coast Hindustani Association, later known as the Ghadar party."
Excerpt - "In the late 19th and early 20th centuries, businessman, students, farmers, and laboreres began coming to California from India. Many decided to settle here and make California their home. This exhibit tells their story--their struggles, successes, and contributions--through material from the rich "South Asians in North America" archive.

Formerly known as the Hindustan Ghadar Party Collection, the South Asians in North America (SANA) Collection relates to an Indian nationalist party based in Northern California during the first two decades of the 20th century. The collection includes primary source photographs, pamphlets, party literature, and interviews in Punjabi, Hindi, Urdu, and English. 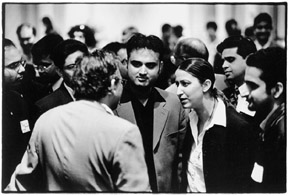 Silicon Raj: Making a Difference to America's Future is an [the artist's] effort to provide the Indian community with a visual voice, so others will respect their ambitions, culture, music, and other social values, and to document the day to day life of a proud community."
"Silicon Raj is a photo documentary work in progress, a project to honor the contributions of Indians in America -- in the high tech industry, medicine, biotechnology, publishing, academia, social service, arts and culture -- and their entrepreneurial leadership in creating jobs and prosperity for all Americans. It is time for Americans to welcome their presence and help in their integration.

Gobind Behari Lal Collection. This collection, ranging from circa 1945 to 1979. includes 8 cartons of papers, notebooks, photographs, and other items related to Gobind Behari Lal, who came to UC Berkeley in 1912 on a scholarship, joined the Gadar Party, and participated in the Indian independence movement. He later worked as a science journalist for Hearst newspapers, becoming the first Indian-American to win a Pulitzer Prize.

Henry Morse Stephens Collection. This is an early bequest in 1919 of an important collection relating to British India and Indian history.

Kipling Collection. This collection on Rudyard Kipling was begun in 1919 and expanded by a major purchase in 1963 of rare and scarce materials, first editions, manuscripts, typescripts, and ephemera.

Krishnabai Nimbkar Collection. This was a gift in 1955 from Dr. Krishnabai Nimbkar's collection on India's Congress Party, including correspondence, papers, pamphlets, and policy statements.

Leo E. Rose Himalayan Collection. This collection was begun with extensive purchases made in Nepal by Professor Leo Rose on politics, history, and law in the 1950s and continued with purchases under the Himalayan Border Countries Program from 1960 to 1969 and is currently enhanced by acquisitions under the Library of Congress Acquisitions Program. This collection includes microfilm of portions of the holdings of the India Office Library, London and the Nation Archives in New Delhi on the Himalayan region, with a concentration on Nepal. It is especially strong on the 19th and early 20th century period and is a unique resource in the U.S.

Maps of South Asia. The Earth Sciences & Map Library holds 4500 maps and nautical charts of South Asia, in addition to world maps and general maps of Asia and the Indian Ocean region. There are also 65 atlases and gazetteers of the area.

The Power of Patterns: Double Ikat for Textile Exchange in India and Indonesia. In her honors thesis, My Chan highlights two distinctive types of textiles produced by tie-dying the warp and weft threads before they are woven, hence "double ikat" Patola in Gujarat, India and Geringsing in Bali, Indonesia.

S.K. (Swarna Kumar) Mitri Letters. This collection consists of four letters (10 p.) Mitri, a "Hindu student", wrote to a fellow student at the University of California Berkeley. It includes details of Mitra's life in Bengal, India, where he married against his family's wishes and tried to start a boycott of British goods. Mitri also writes about how he came to UC Berkeley, his feelings about the campus, and his attitudes toward "foreigners."