On the Same Page 2018: Handmaid's Tale: The Exhibit at Moffitt Library

The exhibit cases are opposite the elevators on the 3rd (main) floor of Moffitt Library (hours).

Cal ID is required for entrance to Moffitt. 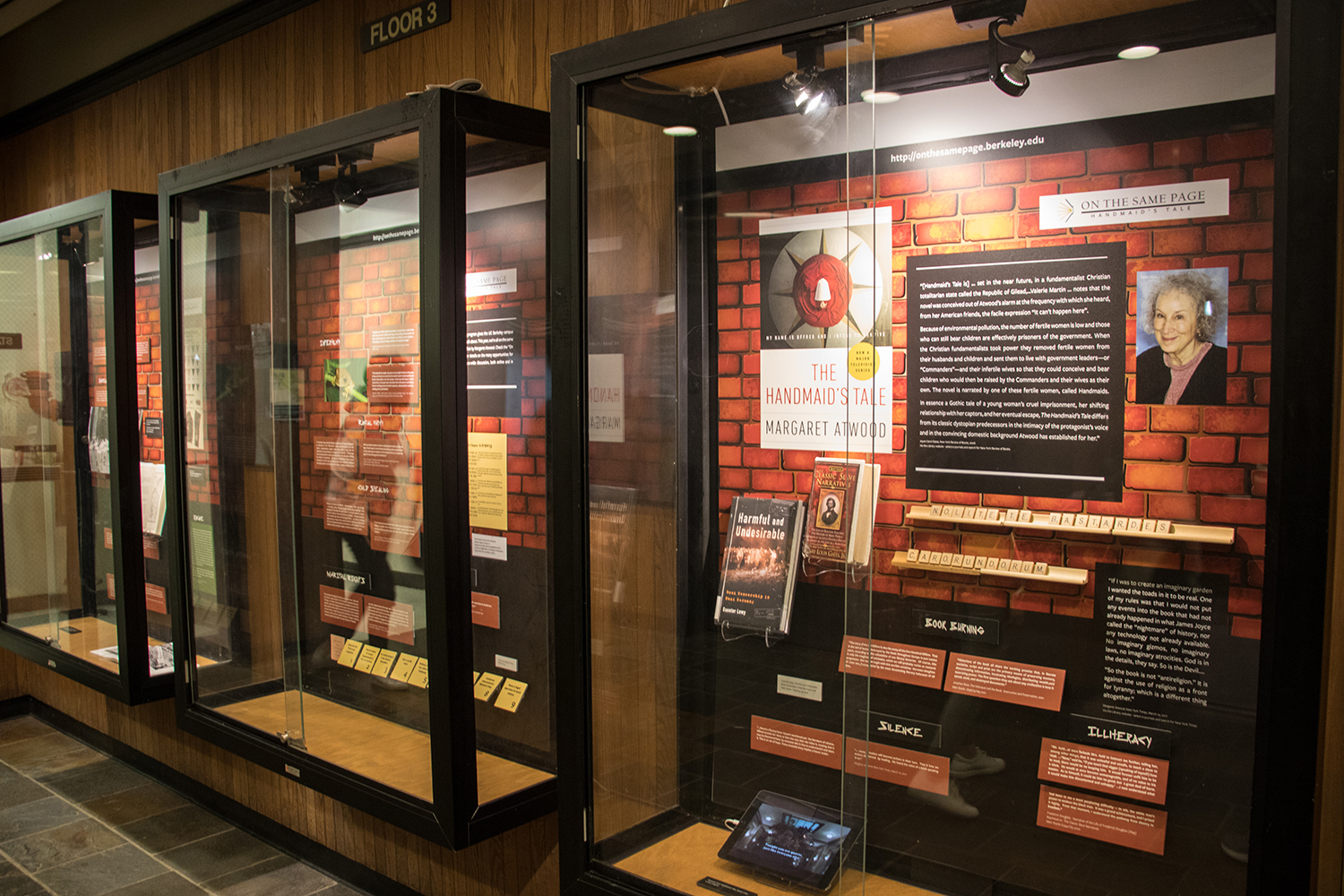 “[Handmaid’s Tale is]… set in the near future, in a fundamentalist Christian totalitarian state called the Republic of Gilead,...Valerie Martin ... notes that the novel was conceived out of Atwood’s alarm at the frequency with which she heard, from her American friends, the facile expression “It can’t happen here” ,,,

“If I was to create an imaginary garden I wanted the toads in it to be real. One of my rules was that I would not put any events into the book that had not already happened in what James Joyce called the “nightmare” of history, nor any technology not already available...

“The story of the Six Million is also the story of the One Hundred Million.  That is the toll of books destroyed by the Nazis throughout Europe in just twelve years, according to the calculation of one library historian.

“Historians of the book all share the working premise that, in literate societies, script and print are the primary means of preserving memory, disseminating information, inculcating ideologies, distributing wealth,and exercising power.  The first question they ask about any civilization is how it saved, used, and destroyed documents.”

--Jonathan Rose, The Holocaust and the Book:  Destruction and Preservation, 2001 Main Stacks  and e-book

“...there’s a literary form I haven’t mentioned yet:  the literature of witness. Offred records her story as best she can; then she hides it, trusting that it may be discovered later, by someone who is free to understand it and share it.  This is an act of hope: Every recorded story implies a future reader.

“Mr. Auld...at once forbade Mrs. Auld to instruct me further, telling her, among other things, that it was unlawful and unsafe, to teach a slave to read.  …I now understood what had been to me a most perplexing difficulty -- to wit, the white man’s power to enslave the black man.  It was a grand achievement, and I prized it highly. From that moment, I understood the pathway from slavery to freedom.”

Reprinted in:  The Classic Slave Narratives

“Atrazine, one of the world's most widely used pesticides, wreaks havoc with the sex lives of adult male frogs, emasculating three-quarters of them and turning one in 10 into females, according to a new study by … UC Berkeley's Tyrone B. Hayes, professor of integrative biology.”

“The study did not explain why sperm counts might be down in this group of men, but there are several theories based on prior research performed by the study authors and other groups. Levine says that drops in sperm counts have, in the past, been associated with environment and lifestyle factors including prenatal chemical exposures, adult pesticide exposures, smoking, stress and obesity.”

Jacob, Rachel, Leah and the handmaids

A Hebrew - English Bible,  According to the Masoretic Text and the JPS 1917 Edition (online)

“In December 1935, Heinrich Himmler established an SS agency designated as Lebensborn, or the “Well of Life” society…[it] functioned as one unit within a comprehensive eugenics policy begun earlier in 1931 ... Not only was unblemished Aryan ancestry demanded of an SS couple, but both partners were required to undergo a thorough physical examination and to submit a detailed ancestral history which provided a medical record for evaluating their health and physical vigor."

“During the Process of National  Reorganization… from 1976 to 1983 -- as many as thirty thousand people, mostly young Argentines, were disappeared….According to human-rights groups, as many as five hundred newborns and young children were taken from disappeared parents and handed over, their identities erased, to childless military and police couples and others favored by the regime."

“A wife should no more take her husband’s name than he should hers.  My name is my identity and must not be lost.”

“The modesty costumes worn by the women of Gilead are derived from Western religious iconography — the Wives wear the blue of purity, from the Virgin Mary; the Handmaids wear red, from the blood of parturition, but also from Mary Magdalene. Also, red is easier to see if you happen to be fleeing.”

“From 1938, Jews in the camps were identified by a yellow star sewn onto their prison uniforms, a perversion of the Jewish Star of David symbol. … Criminals were marked with green inverted triangles, political prisoners with red, "asocials" (including Roma, nonconformists, vagrants, and other groups) with black or—in the case of Roma in some camps—brown triangles. Homosexuals were identified with pink triangles and Jehovah's Witnesses with purple ones.”

“To ensure that the people would become and remain submissive, East German communist leaders saturated their realm with more spies than had any other totalitarian government in recent history.  The Soviet Union’s KGB employed … one agent per 5,830 citizens...for the Nazi Gestapo, there was one officer for 2,000 people. The ratio for the Stasi [East German secret police] was one secret policeman per 166 East Germans.   When the regular informers are added…[and]... part-time snoops, the result is nothing short of monstrous: one informer per 6.5 citizens.”

One of many memorials to those who died trying to cross the Berlin Wall between 13 August 1961  and l 9 November 1989.

--The Berlin Wall 1961-1989: photographs from the stock of the Archives of the Land of Berlin/ selected and commented on by Volker Viergutz.
Main Stacks

“But her Love to her Husband, will also admit, yea, and Produce the Fear of, A Cautious Diligence never to Displease him.... and though she do's not Fear his Blowes, yet she do's Fear his Frowns, being Loth in any way to Grieve him, or cause an Head-ake in the Family by Offe•ding him.”

--Cotton Mather:  Ornaments for the Daughters of Zion.OR The CHARACTER and HAPPINESS OF A Vertuous Woman: in A DISCOURSE Which Directs The FEMALE-SEX how to Express, THE FEAR OF GOD, in every Age and State of their LIFE; and Obtain both Temporal and Eternal Blessedness. 1692.

Newspapers and MIcroforms, also online through the Library website.

“By the laws of Massachusetts as by those of England a married woman could hold no property of her own.  When she became a wife, she gave up everything to her husband and devoted herself exclusively to managing his household. … Puritan wives who tried to unsnarl the knotty problems of theology by themselves could take warning from the wife of Governor Hopkins of Connecticut.  Mistress Hopkins went insane, and according to Governor Winthrop the reason was that she spent too much time in reading and writing.

“People involved with the Underground Railroad developed their own terminology to describe participants, safe places and other codes that needed to be kept secret. People who guided slaves from place to place were called "conductors." Locations where slaves could safely find protection, food or a place to sleep were called "safe houses" or "stations." ... Canada, one of the final safe havens for many fugitive slaves, was called the ‘Promised Land’”

Map of Underground Railroad routes, from: