A guide to selecting and creating visual material

Purpose of this guide

This guide presents the elements and principles of art and design—concepts that can be applied to all forms of visualization. Each element and principle defined in this guide uses at least one image to demonstrate how each concept is working. However, these examples are not the only way the element or principle can be put into practice. Think broad and fluidly when applying these design fundamentals in your own context.

Tip: After you become familiar with each concept go back through the example images and apply some or all of the elements and principles.

Elements of Art and Design

Line is a straight or curved mark that connects two points or is the path of a moving point. Lines vary in weight (thickness or thinness), direction, and length. Lines can also be implied. 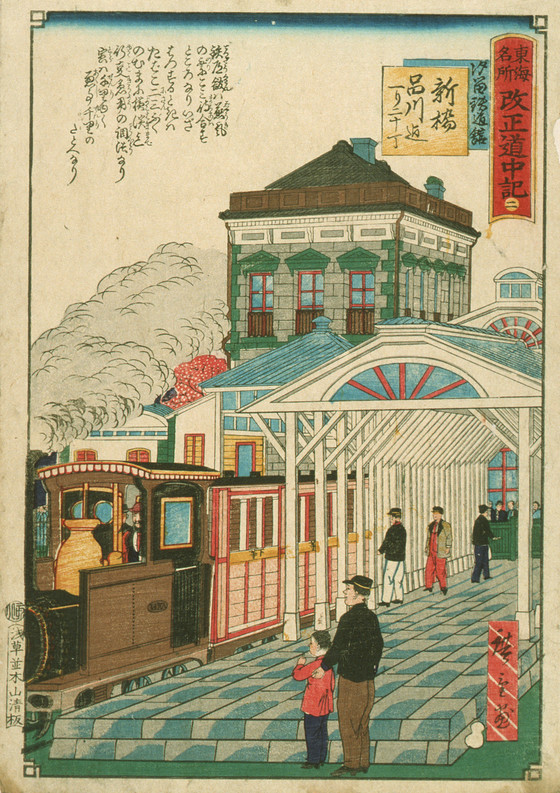 Line is the dominant element that makes up this print. Each line is similar in weight and most of the lines are straight which conveys an orderly feeling. Short, curved lines create the puffs of steam billowing into the air. The implied lines in the image travel from the eyes of the two figures in the foreground toward the train. These invisible lines indicate that the train is the subject of this illustration. 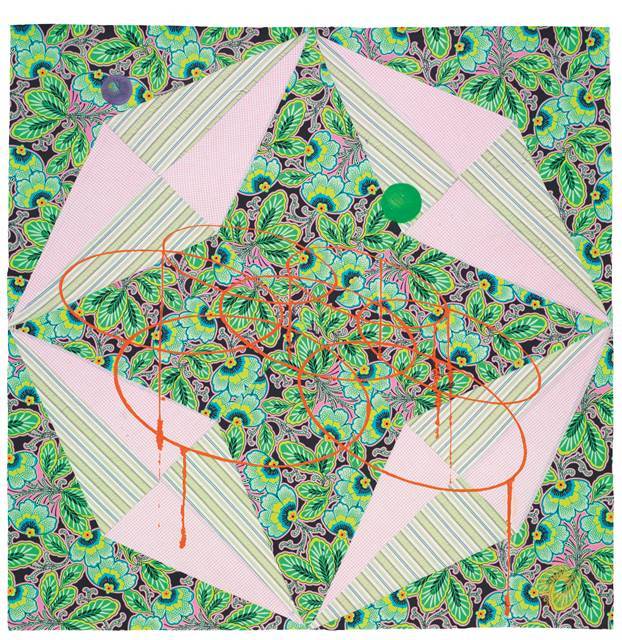 This is an example of geometric shape and how shapes can be used together to create other shapes. Behind the seven red circles jutting out from the flat plane are four diamonds that touch at each end. Each diamond is created from four triangles. Together these triangles and diamonds create a star-like polygon out of the patterned background. The floral pattern in the background is made up of organic shapes. These type of shapes are irregular, free-form, and often found in nature.

Form is a three-dimensional shape that exhibits height, width, and depth. It can be geometric or organic. 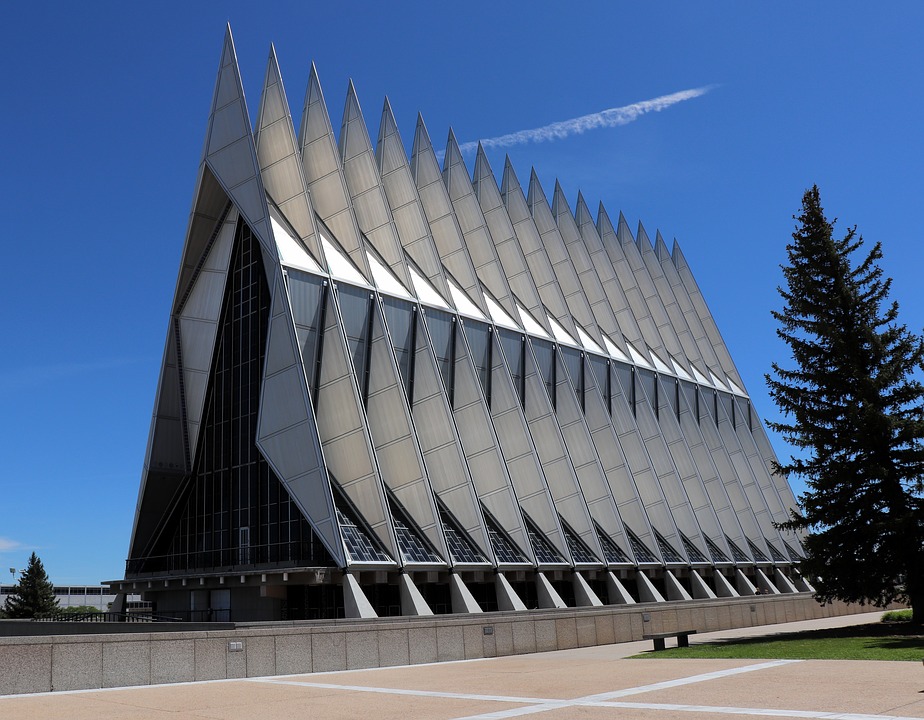 The architectural elements of this chapel are made up of straight lines and triangular shapes thus creating a geometric form. 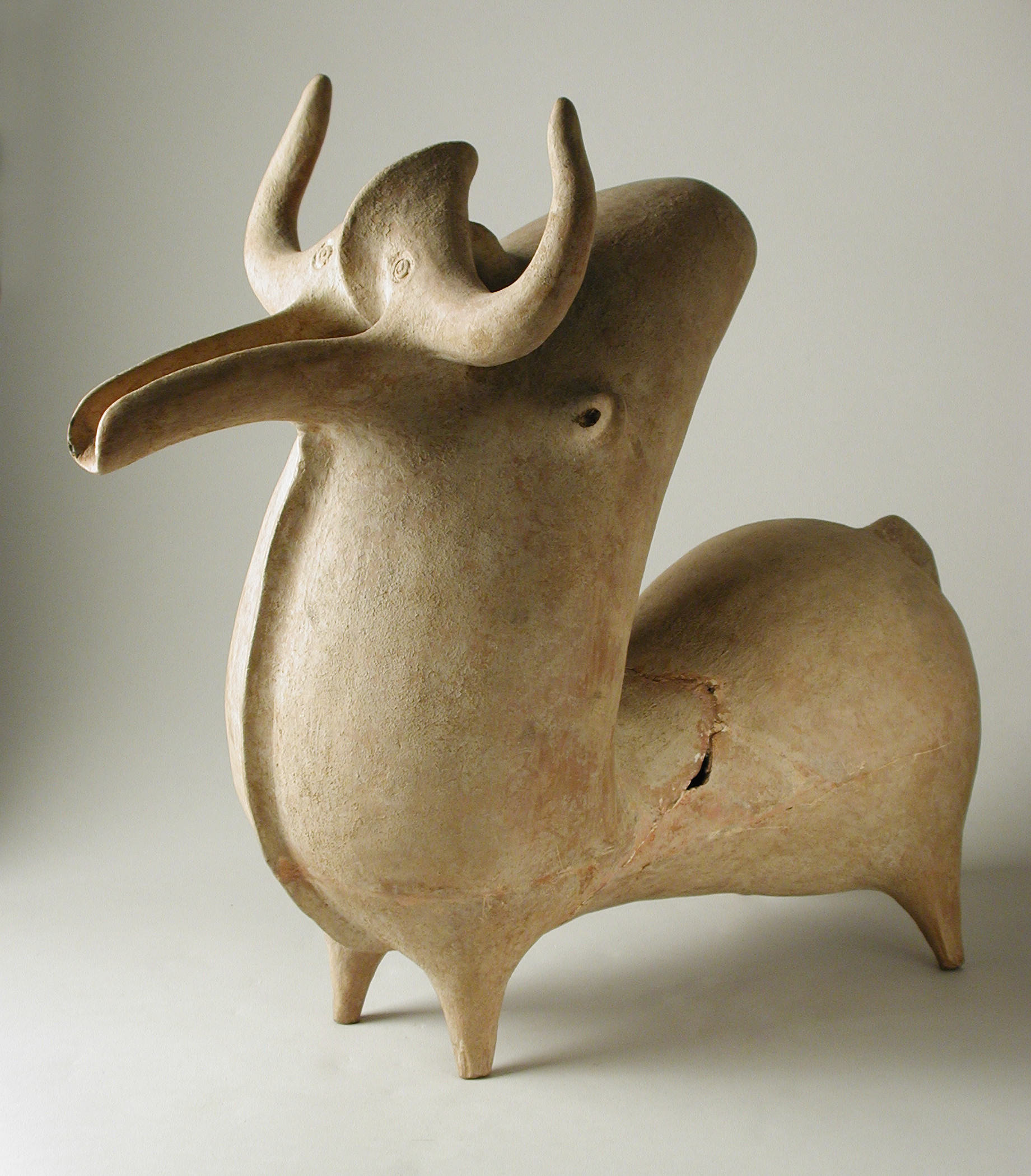 Soft curves and rounded features on this Iranian vessel of a ram contribute to its organic form. Although symmetrical, its form does not exhibit perfect, uniform measurements.

Color is the perception of light reflected from the surface of a shape or form. Color has three main characteristics: 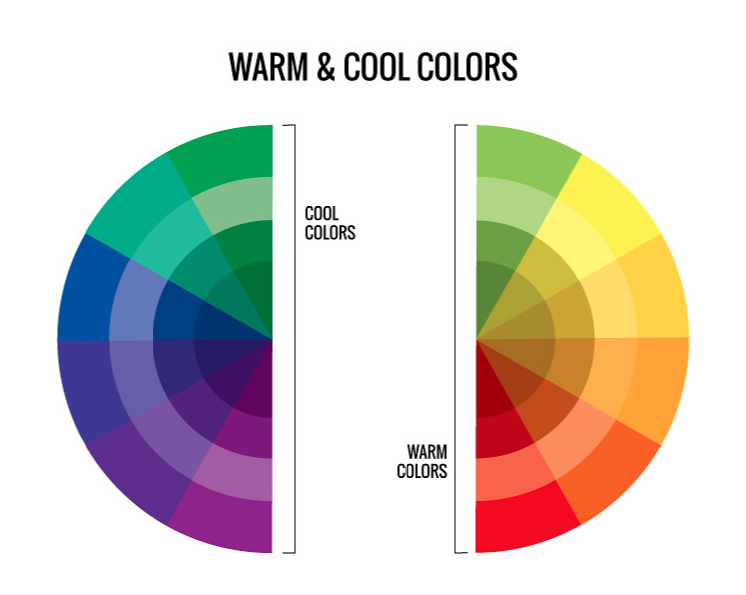 Colors can also be described as warm or cool depending on which end of the color spectrum they fall on. 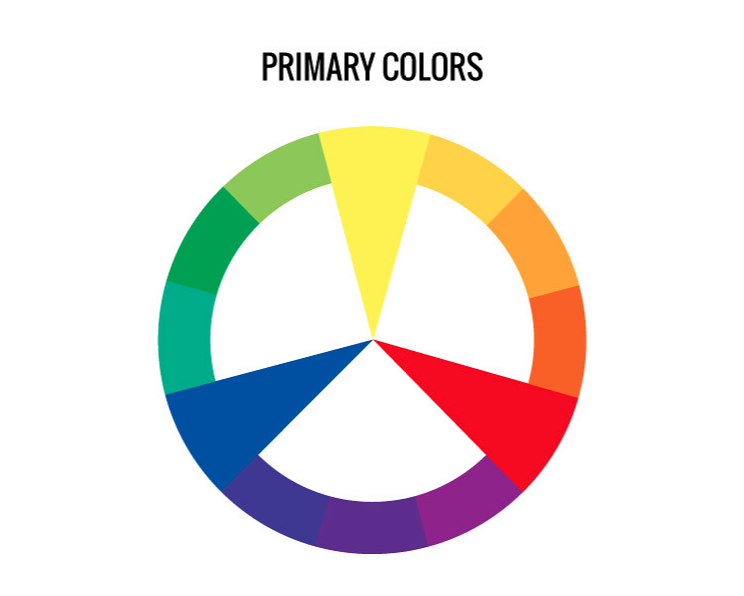 Red, blue, and yellow are the foundation of the color wheel. Their true color pigments cannot be created by mixing any other combination of colors. All other colors in the wheel are derived from these three hues. 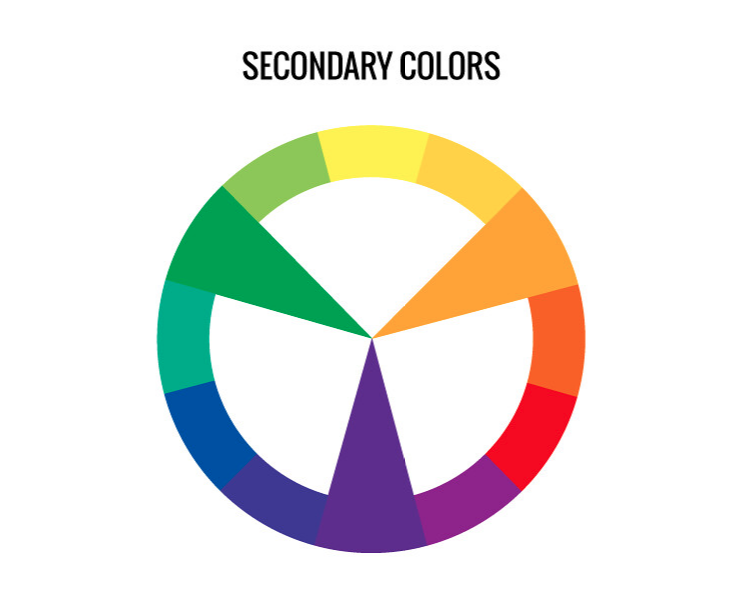 Secondary colors are created by mixing equal parts of two Primary colors together: 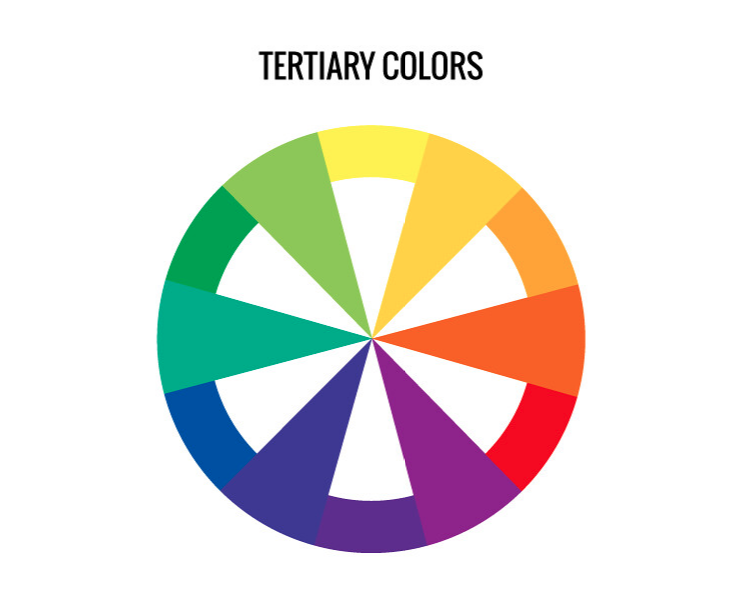 Tertiary colors are created by mixing equal parts of a Primary and Secondary colors together: 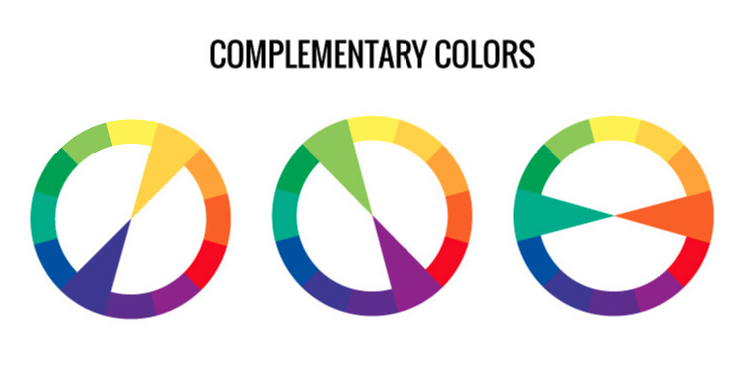 Complementary colors enhance each other. They are opposite colors and are located directly across from each other on the color wheel. These color combinations offer high contrast.

Analogous color schemes are comprised of three neighboring colors on the wheel. These combinations achieve a harmonious look and feel.

Value is the degree of lightness or darkness in a color. Contrast of value separates objects in space. Gradation of value suggests mass and contour. 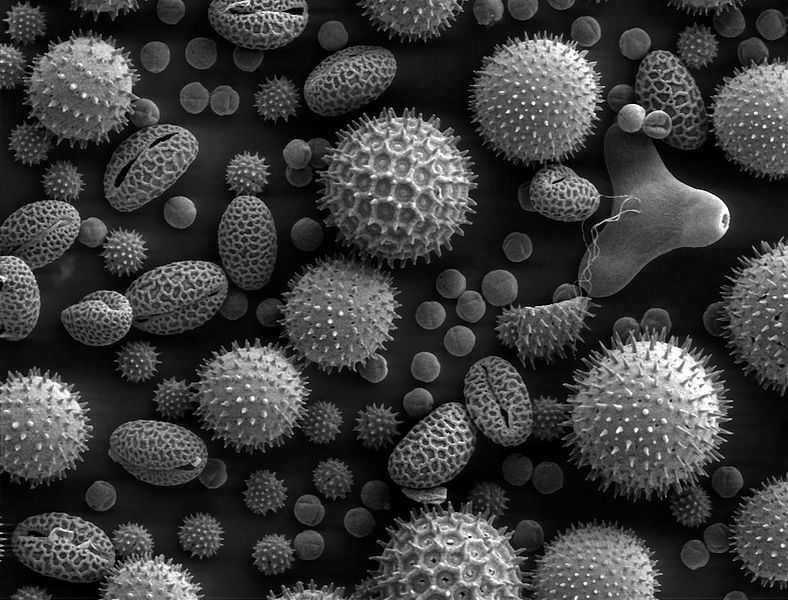 In this magnified image of pollen the range of values from white to black and all of the grays in between not only separates each grain from one another but also indicates how close or far away in space they are. For example, the pollen grains closest to the surface show a higher contrast with prominent white highlights and the recessed grains show less contrast and are more uniform. Gradation of value can be seen most clearly on the spherical, spiky grains. Focusing on the largest and brightest pollen grain on the lower right side of the image we can see that the center of the sphere is a light gray and gets whiter toward the edges making it contrast heavily with the black background and indicating is mass and contour.

The distances and areas around, between, and within components of an artwork. There are two kinds of space:

The cranes painted on this Japanese screen make up the positive space while the flat, gold background is the negative space. ​The abundance of space in this piece creates a sense of stillness and serenity. 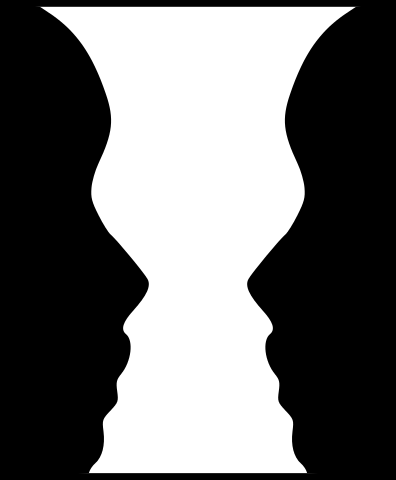 Space can also create a visual illusion. In this image negative and positive space are interchangeable depending on what part of the image your eye focuses on. By concentrating on the white shape will notice a cup against a black background. On the other hand, if you focus on the black shapes you will see two faces in profile looking at one another in front of a white background.

Texture is the surface quality of an object that we can sense through touch. Texture can be tactile or visual. 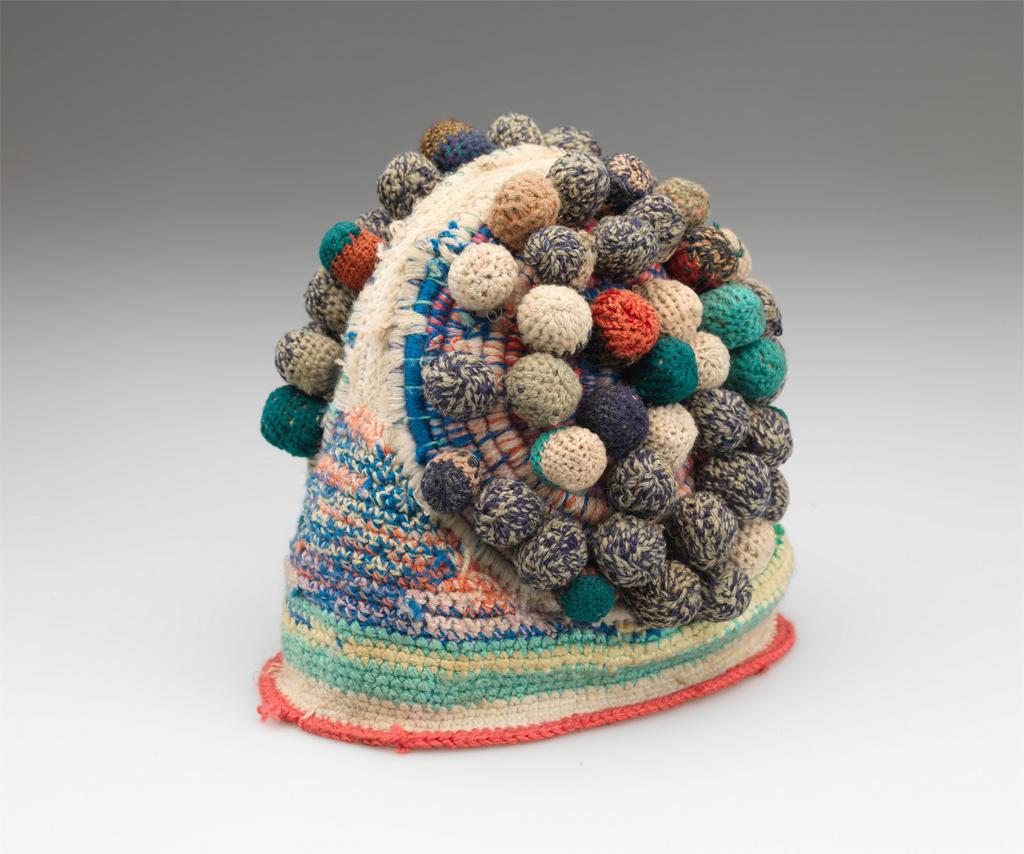 The fiber used to create this hat is an example of tactile texture. If one were to pick up the hat, or wear it, the texture would be felt through touch. Because fiber is a ubiquitous material in our lives we can deduce what an object like this may feel like or be utilized for by just seeing an image of it. 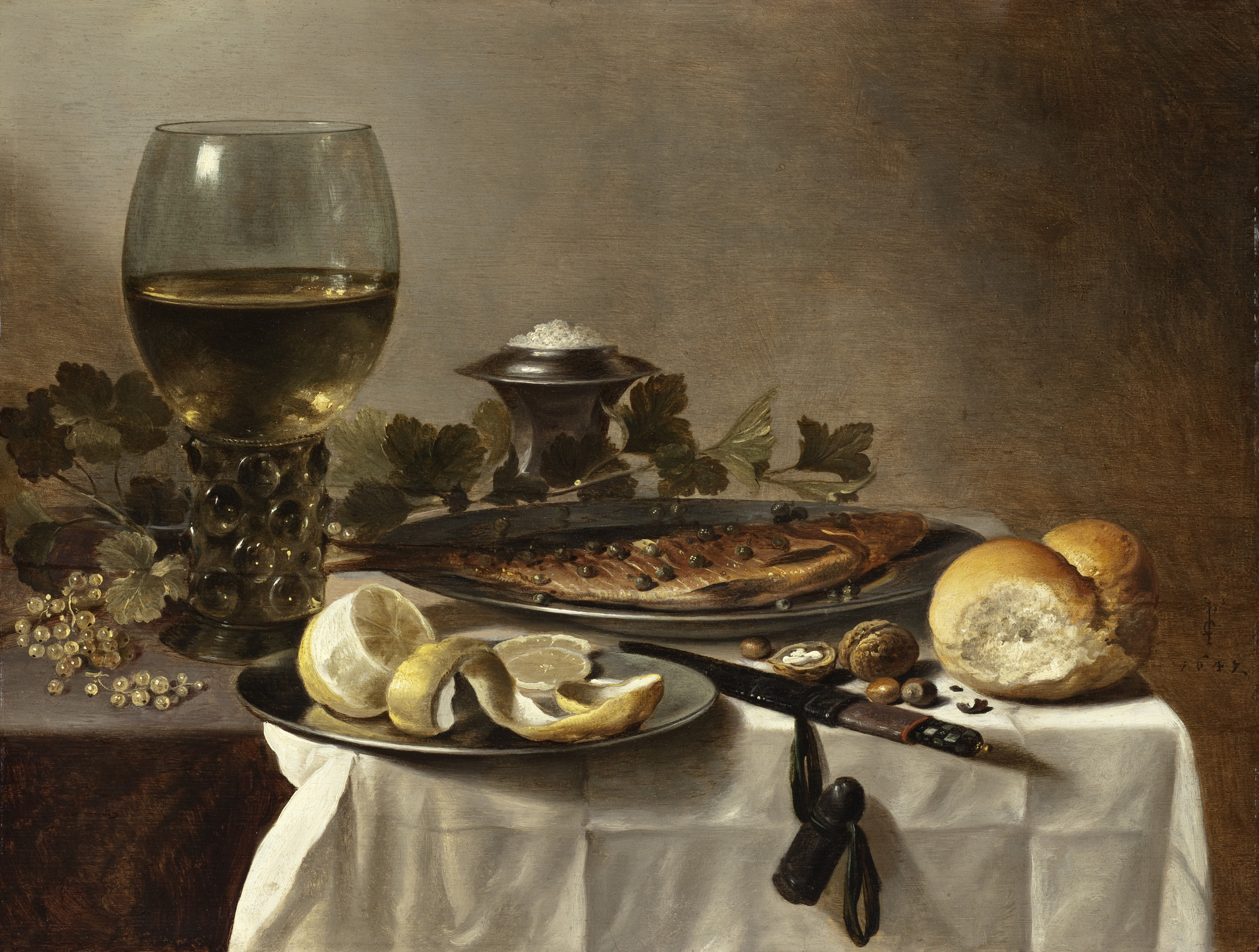 ​The painting techniques used in this still life creates a realistic, three-dimensional depiction of the objects displayed on a two-dimensional surface. Visual texture is most apparent in the smoothness of the glass, the fluffiness of the bread, and the crisp white linen draped over the table. While these objects cannot be picked up the viewer can still understand the textures the paint is mimicking.

Principles of Art and Design

Balance is the distribution of objects, colors, texture, and space. There are three types of balance: symmetrical, asymmetrical, and radial. 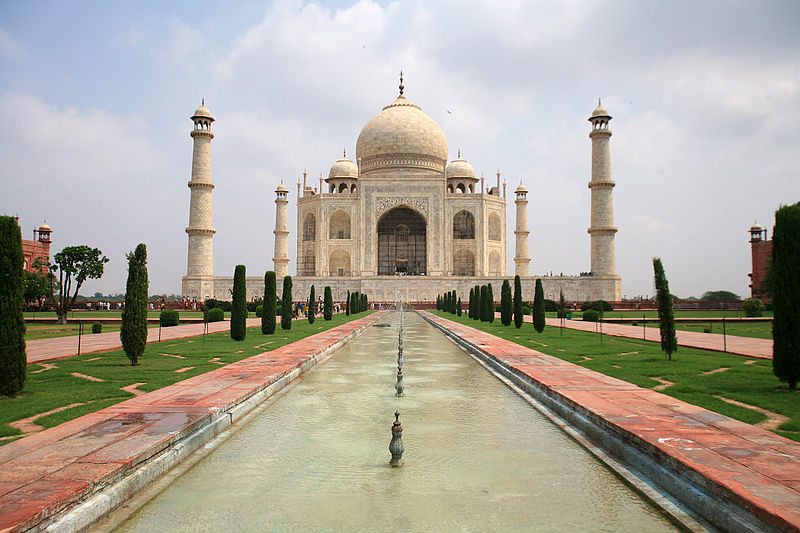 In this photograph of the Taj Mahal the symmetrical balance is found in the architecture itself, the garden design, and the reflecting pool. The composition of the photo also contributes to the overall symmetry. The fountain heads that line the center of the reflecting pool serve to bisect the entire photo wherein each side mirrors the other. 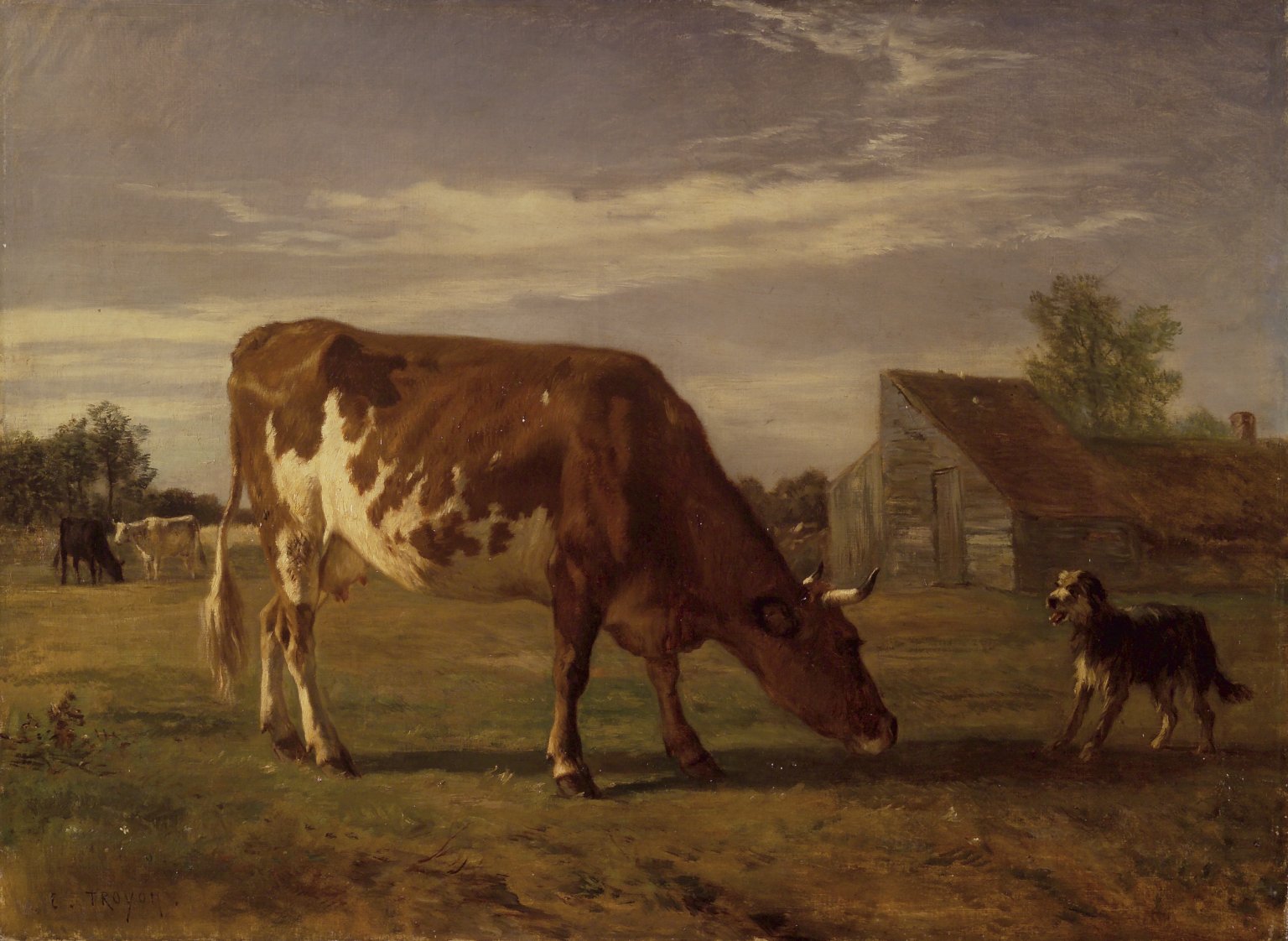 This painting demonstrates asymmetrical balance through the composition of the cow and the dog in the foreground. The cow takes up two-thirds of the painting while the dog, which is markedly smaller, takes up one-third. Simultaneously, the background reciprocates the asymmetry in the foreground. The wooden shed mirrors the cow while the two cows mirror the dog creating an X-shape which fills the space and balances the composition.
﻿ 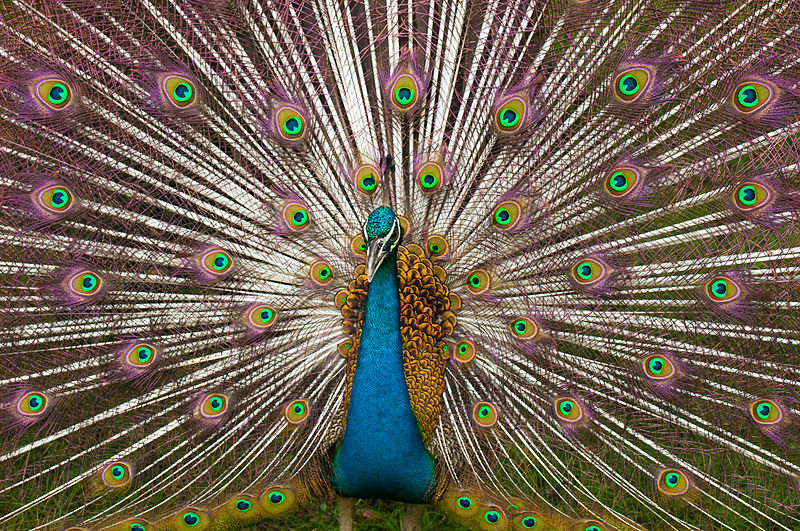 This male Indian peacock splays it's train into a fan-like formation which fills the entirety of the frame. Focusing on the bird's body as the center point it's plumage is an example of radial symmetry. We can also see repetition of this type of symmetry in the eyespots along each feather as well as the white lines of light that shine through from behind the bird.

Emphasis is the part of the design that catches the viewer’s attention. Emphasis is created by contrasting an element with other elements. The area could be different in size, color, texture, shape, etc. 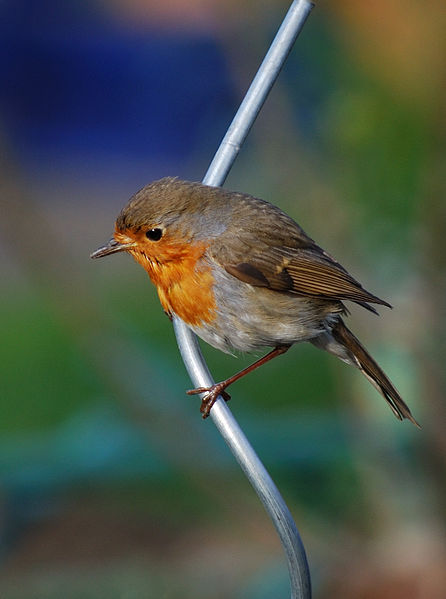 ​This photo of a European robin demonstrates emphasis though the contrast of subject and background. The bird is sharply in focus revealing it's morphological traits whereas the background is blurred into soft patches of color which allows the viewer to focus solely on the bird. The complementary colors in the image also serve to emphasize the bird. Namely, the juxtaposition of the robin's orange breast with the blue patch in the upper left corner and the robin's leg which has a hint of red to it that contrasts with the green tones in the background.

Movement is the path the viewer’s eye takes through the work of art or design. Movement can guide the viewer to focal areas or create the look or feeling of action. 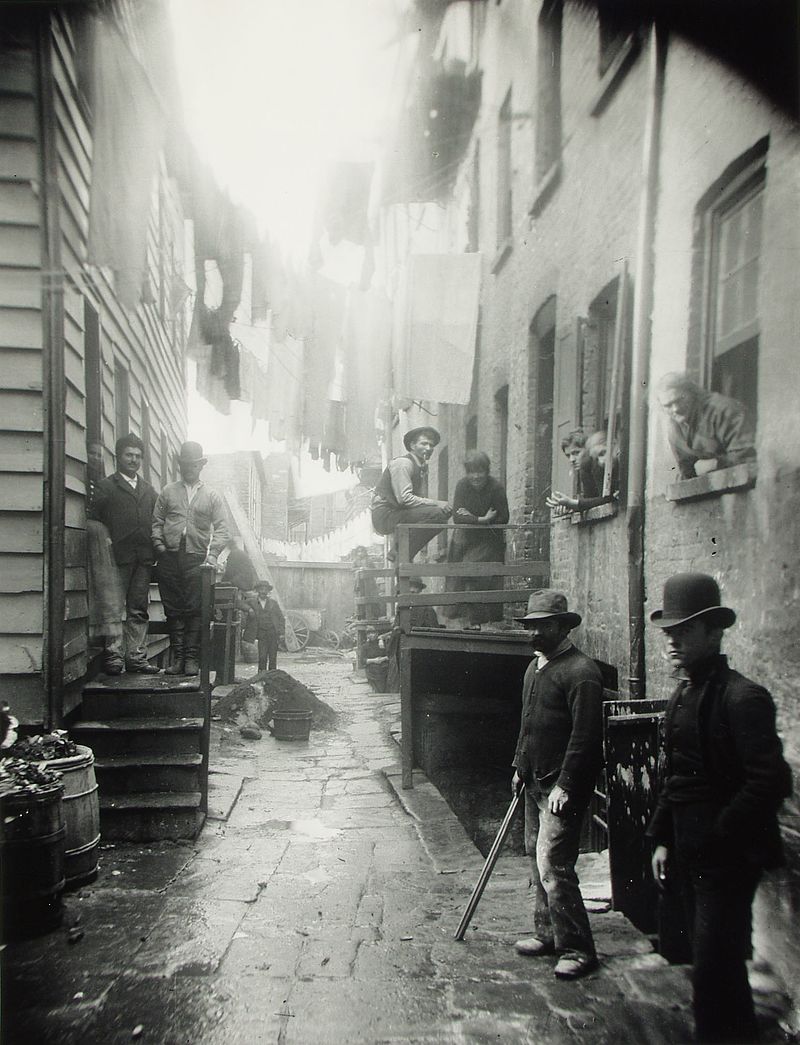 Although the figures in this photograph are static the positioning of their bodies creates a meandering line moving toward the background. This sinuous line is repeated and continued by the clotheslines strung between the buildings. When you couple the movement of this implied line with the fact that these men are bandits, the movement of the line compliments the qualities of a bandit: snaky and cunning. 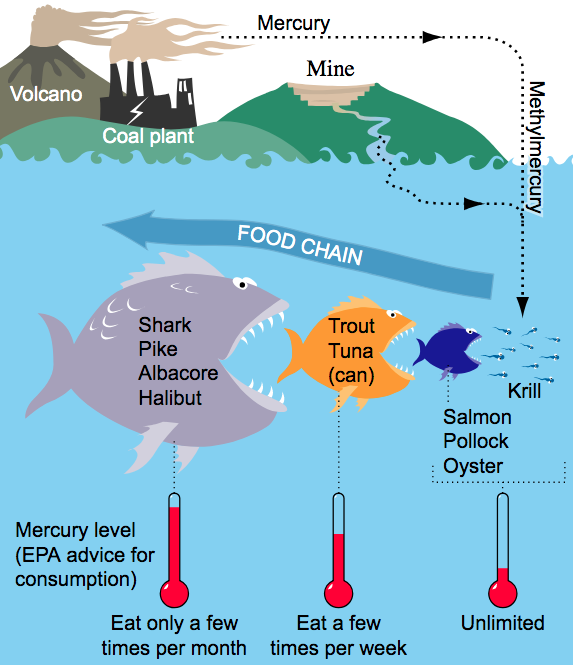 In this infographic movement is found in the directional cues that guide your eye around the image. The dotted lines and arrows serve to direct the viewer through the process of how mercury makes its way from volcanoes, coal plants, and mines into and up the food chain. The graphic ends with advice for safe consumption of different kinds of seafood based on the mercury levels they contain. 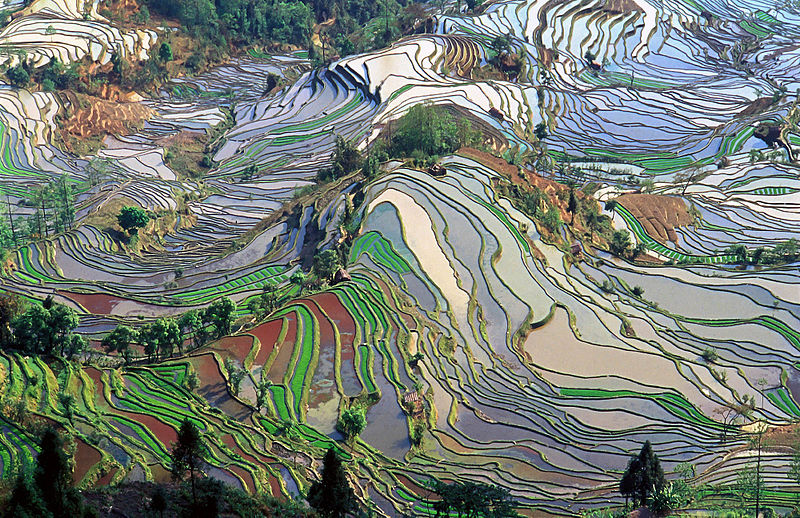 There are several repeating elements in this image that create a pattern. First, there are the curvilinear lines. Aside from creating a sense of movement they also create the boundaries of elongated organic shapes. Next, there is the repetition of colors ranging from green, to blue, to grey, white, and reddish-brown. Lastly, there are the organic forms of tress scattered throughout. All of these elements work together to convey an active, undulating landscape.

Rhythm occurs when one or more elements of a design are used repeatedly to create a feeling of organized movement, or a visual tempo. 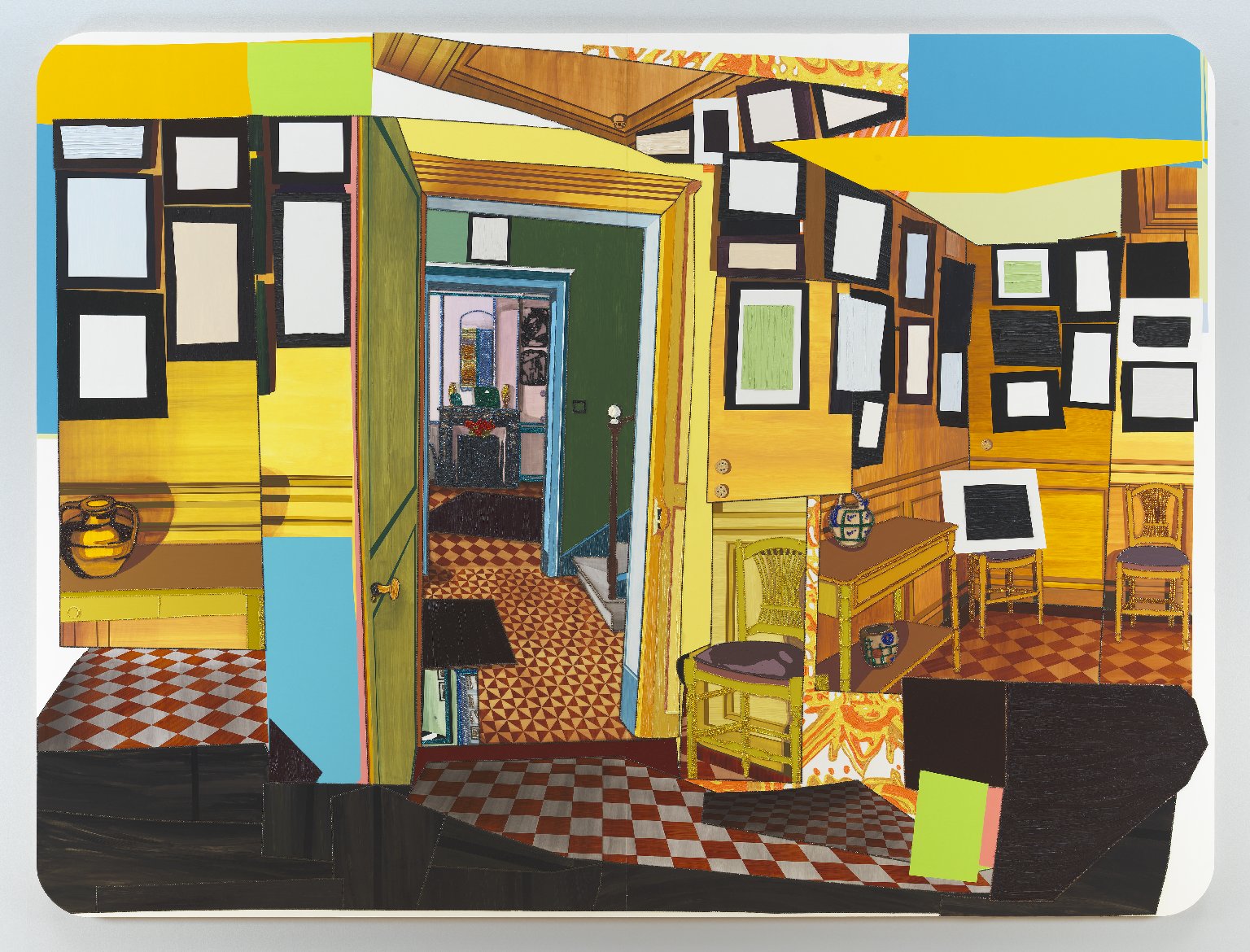 In this collage the artist creates rhythm through the repetition of shape and pattern. Beginning with the red checkered floor the viewer's eye is drawn from the niches in front room into the subsequent middle and back rooms. Squares and rectangles are repeated throughout the composition. The spatial inconsistencies between the shapes and askew positioning creates tension while also guiding the eye throughout the piece.

Proportion is the relative size and scale of the various elements within a design. 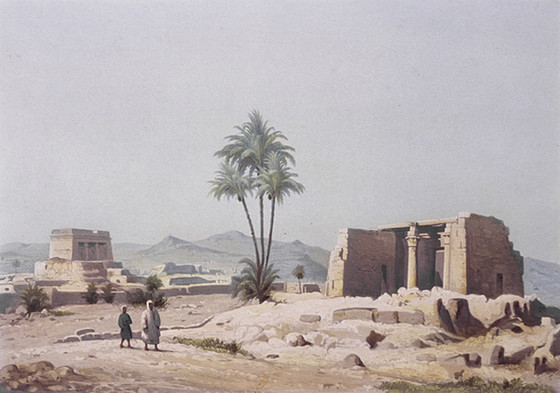 Beginning with the two figures on the left we can see that their size relative to the buildings, rocks, and palm tree is realistic. Likewise, the size of the architectural structures and tree compared the the mountain range on the horizon line is naturalistic. The true proportion of all these elements that make up the scene creates a stable and believable scene. 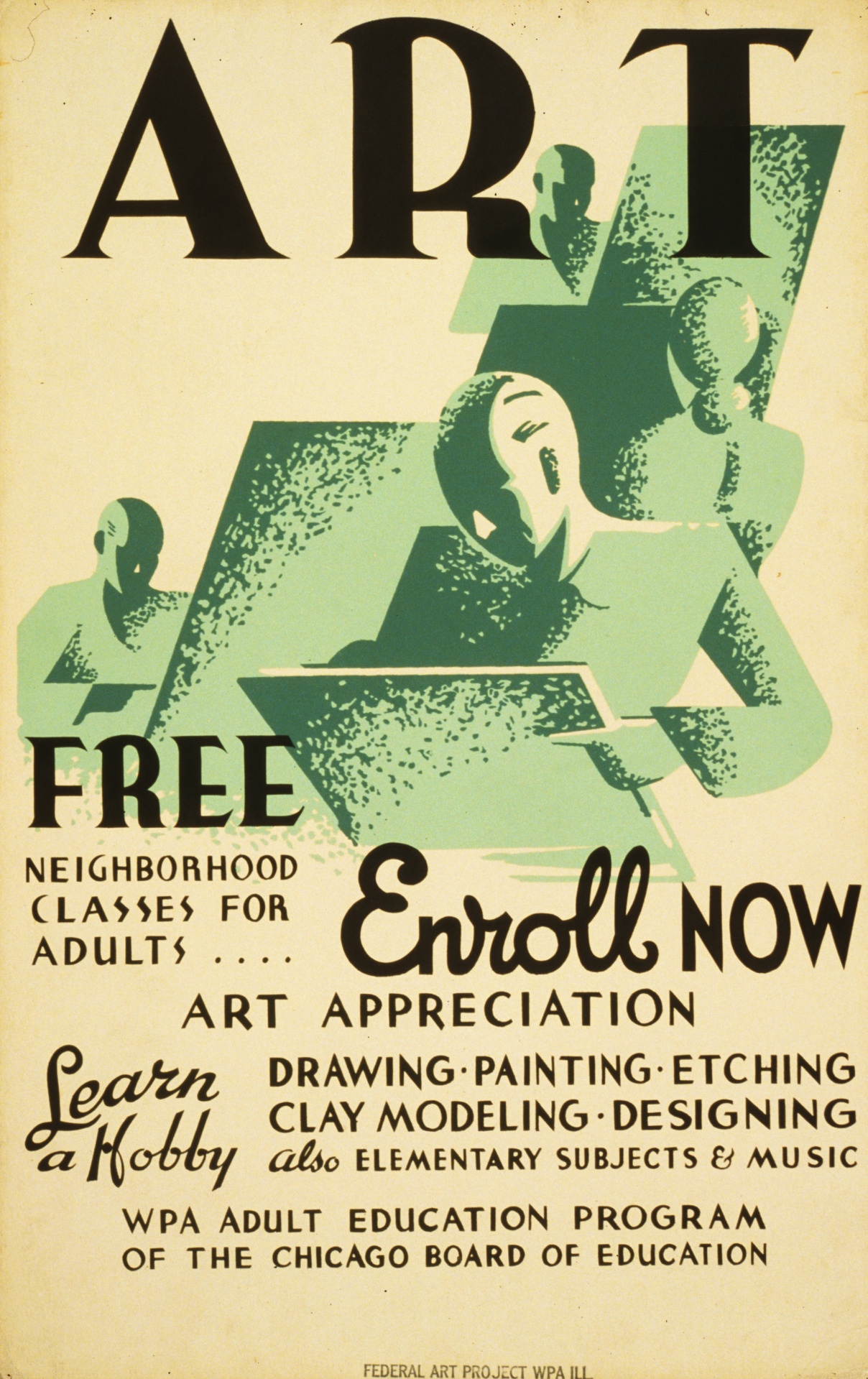 Alternatively, proportion can be used to emphasize a certain element or concept by making the graphic or text larger than the other elements in the design. In this poster the words "art," "free," and "enroll now" are enlarged which works to catch the viewers eye and communicate the core message of the poster directly and succinctly.

Variety is the use of several elements of design to hold the viewer’s attention and to guide the viewer’s eye through and around the image.

This diagram depicting the size of dinosaurs uses variety to convey the information clearly and concisely. First, there are two different types of shapes: the dinosaur and the human. This gives the viewer a reference for scale. Color is used as a key to separate the dinosaurs from one another and the differences in proportion make their lengths and heights easier to read. Lastly, line is used as a tool to show the size differences and contain the information.

Unity is the feeling of harmony between all parts of the design which creates a sense of completeness. 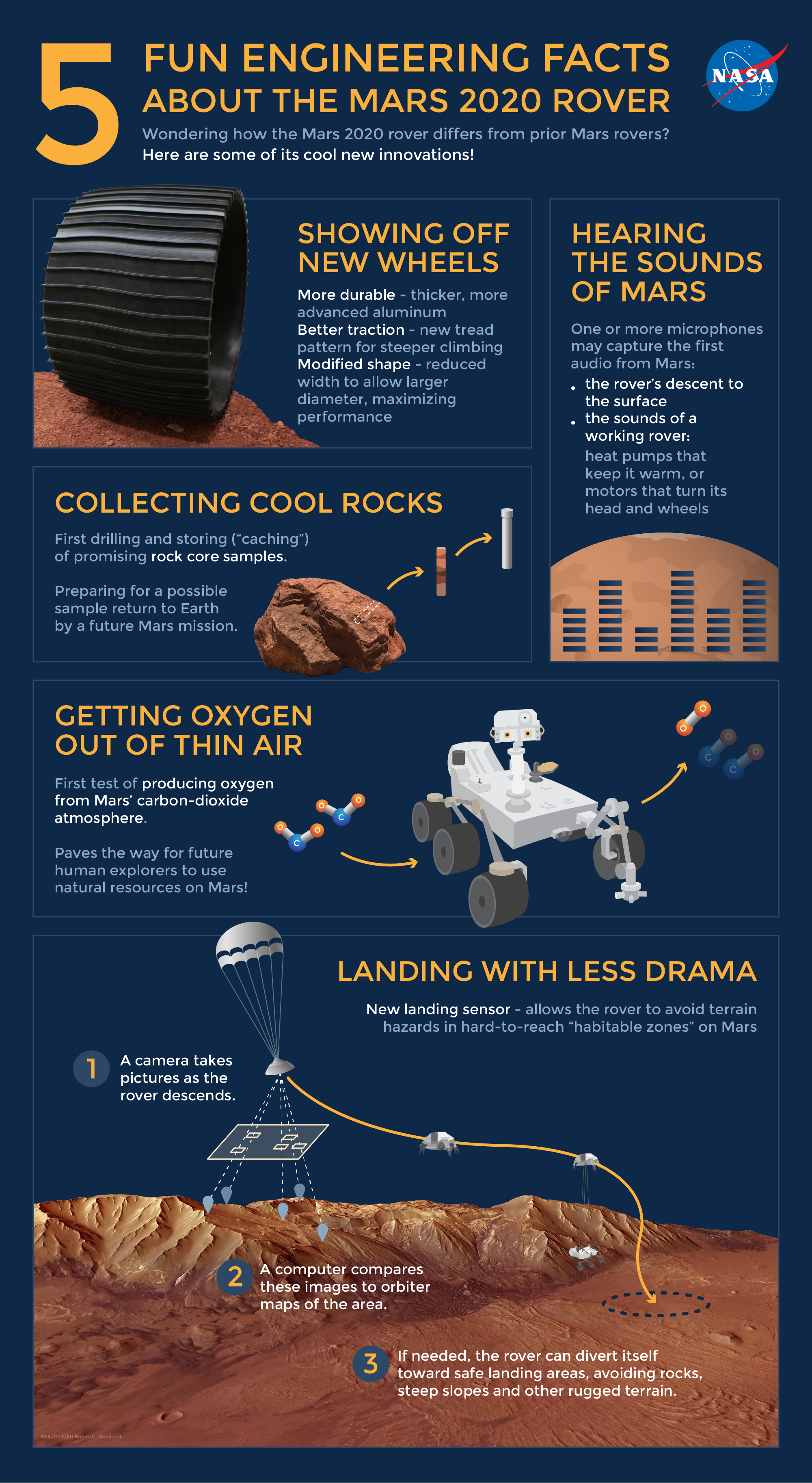 Unity in this infographic is achieved through the repetition of colors, shape, and the proportion of text. The color scheme uses complimentary colors blue and orange to create high contrast and guide your eye throughout the composition. The rectangles that contain each block of information also creates a stable structure that unites the information. The legibility of the text is derived from choosing uniform fonts and keeping the proportions the same throughout. ﻿

This research guide was created by the 2018-19 Library Research Fellow Melissa Cheyenne Foote in partnership with the Undergraduate Library Fellows Program.