Information about finding maps and aerial photographs in the UC Berkeley Library collections and beyond. 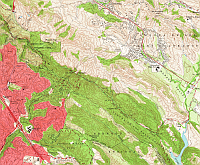 Topographic maps show the physical geography of an area, often including elevation of the terrain and depth of water. These maps can also include elements of the built environment. They are often published as map sets or series consisting of many individual sheets.

The USGS produces topographic maps of the United States at a variety of scales, from the 7.5 minute quadrangles (1:24,000) to 1:250,000. We shelve the physical maps in our library under the call number G3700 svar .U6 [state] [quad name]. Use a paper or digital index to identify the quad for your location of interest.

Scans of international topographic maps can be found on many different sites, including the following: