Women Who Figure: An Exhibit Inspired by the Mathematicians of Hidden Figures: Home

On display in the Mathematics Statistics Library (100 Evans)

(originally closing on June 16, the exhibit has been extended into September)

The book Hidden Figures tells the story of four African-American women who were “human computers,” mathematicians, and engineers for NASA over three decades: Christine Darden, Mary Jackson, Katherine Johnson, and Dorothy Vaughan. In a time marked by discrimination against African-Americans and women, these four made essential contributions to the space program, calculating launches, trajectories, orbits, and more. Inspired by their story, this exhibit highlights their contributions as well as biographies about and books by eleven other women mathematicians across the ages - from Hypatia in 5th Century Alexandria to Maryam Mirzakhani in present-day America. As this exhibit shows, African-Americans and women have made important contributions to mathematics throughout history. However, while progress has been made over the years, both groups remain underrepresented in mathematics; sharing these stories about their contributions can serve as inspiration to all who wish to pursue a career in mathematics. 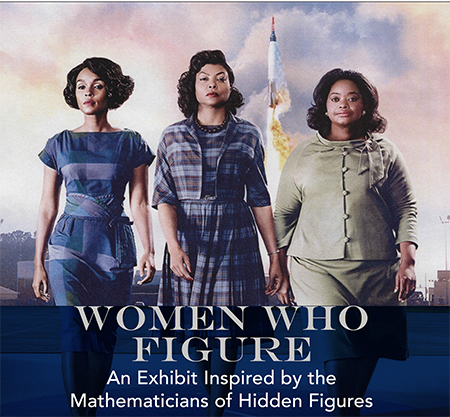