The Bancroft Library has personal and professional papers of naturalists, conservationists, and other like-minded people who did great work for the environment in California and the West, including several who had close ties with the UC Berkeley campus itself. In addition to prominent leaders of the Sierra Club and other environmental groups, members of the National Park Service and associated government agencies and UC Berkeley faculty are well-represented in Bancroft collections.

Leaders of the Sierra Club

The Sierra Club Members Papers are a rich resource not only as a record of individual conservation activities but also for the history of the club itself, chronicling its internal workings along with its myriad legislative, educational, and recreational activities. A wide variety of Sierra Club leaders—celebrated activists of critical importance to the development of the conservation movement in the United States—are represented in this collection, including Ansel Adams, William E. Colby, Richard M. Leonard, William Siri, Edgar Wayburn, and other volunteer-activists intensely involved in local conservation efforts.

It should be noted that not all papers of active conservationists who were also Sierra Club members are included in this group. A number of important collections of personal papers, such as those of Francis P. Farquhar and Robert B. Marshall, were acquired by The Bancroft Library independently of the Sierra Club collection and are cataloged separately. 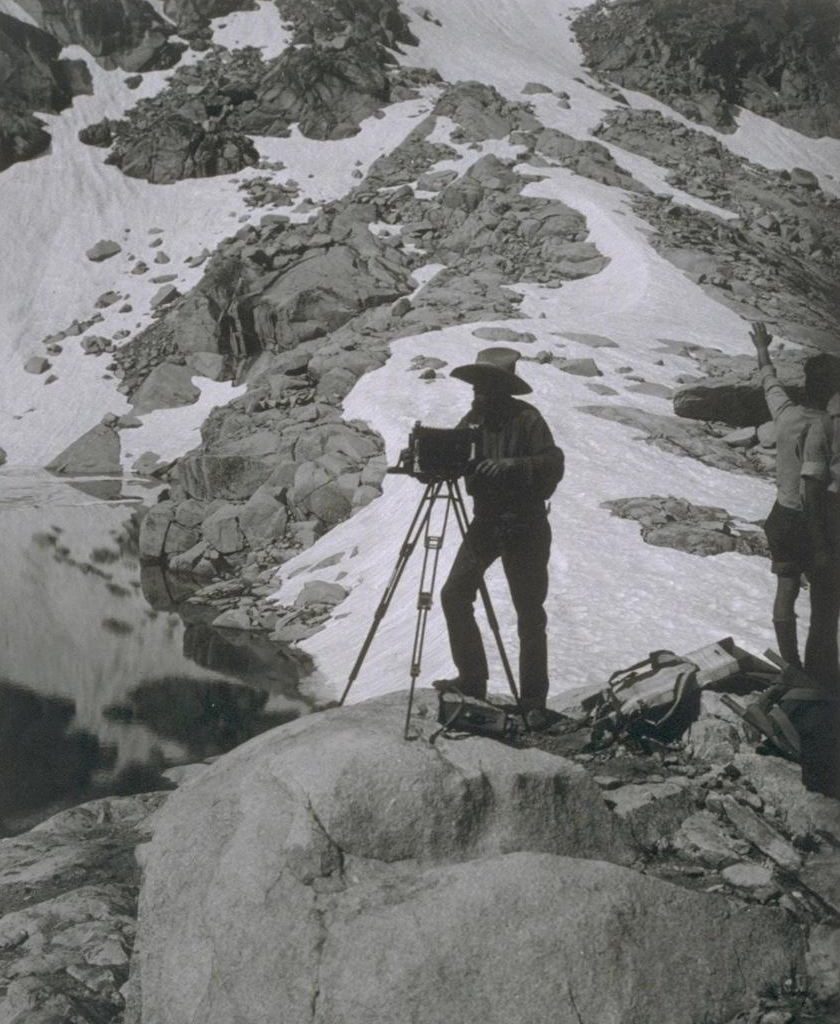 Florence Merriam Bailey devoted her life to the study and protection of birds. From her work in ornithology she authored more than ten books, including several field guides to birds and close to one hundred articles. She gained recognition as a naturalist while at Smith College where she founded the Smith College Audubon Society out of her disgust over the use of feathers and whole birds in fashion. Her later accomplishments include establishing the Audubon Society of the District of Columbia and becoming the first female associate member of the Ornithologists' Union. As an amateur ornithologist Florence Bailey was at the forefront of the movement to use binoculars, rather than shotguns, to observe birds. 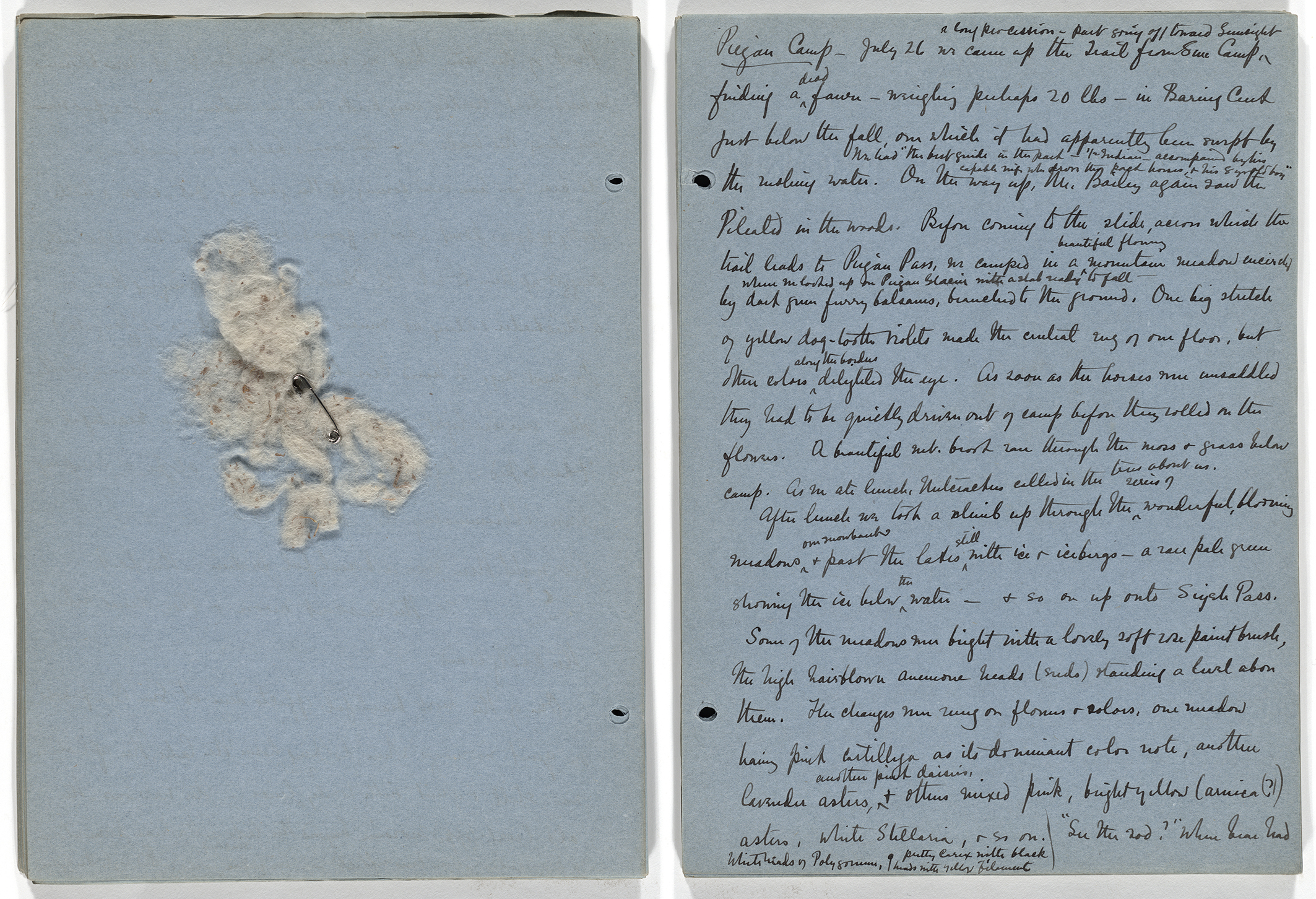 Emanuel Fritz taught forestry at UC Berkeley from 1919 to 1954. In addition, he worked as a private consultant in forestry for the Department of the Interior, various legislative committees, and associations such as the California Redwood Association, the Union Lumber Company, and many others. He was the author of many works on forestry, the lumber industry, and wood technology, including an extensive bibliography of the coastal redwood. Fritz was a world-renowned authority on the sequoia and was often referred to as "Mr. Redwood" by the western press. Fritz's work, particularly in the Redwood Region, was a major factor in the implementation of programs of forest protection and conservation, in reducing the hazard of fire, in substituting for liquidation-cutting the concept of tree farming for continuous yield, in minimizing damage to standing trees through tractor rather than skyline logging, and in reforestation through the preservation of seed trees. 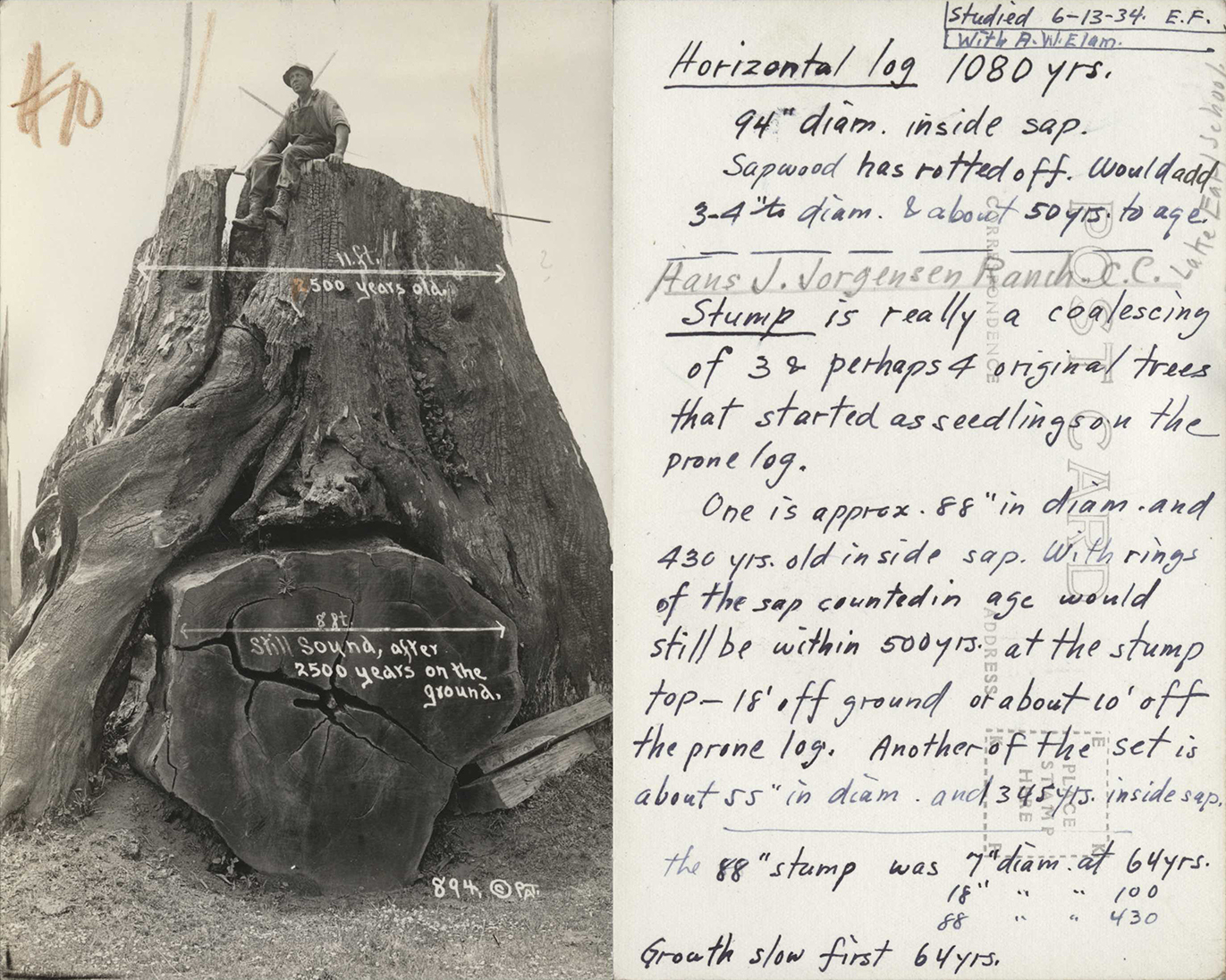 An artist and wildlife conservationist, Margaret Wentworth Owings founded the Friends of the Sea Otter in 1968 and led as its president until the early 1990s. She is also well known for her successful campaigns to block development on beaches along California's central coast in the 1940s and to pass Proposition 117 to ban sport hunting of mountain lions in the late 1980s. She served as the only woman in the California State Park Commission from 1963 to 1969 and was a leader in many environmental groups, including Defenders of Wildlife, the National Parks Foundation, and the Environmental Defense Fund. 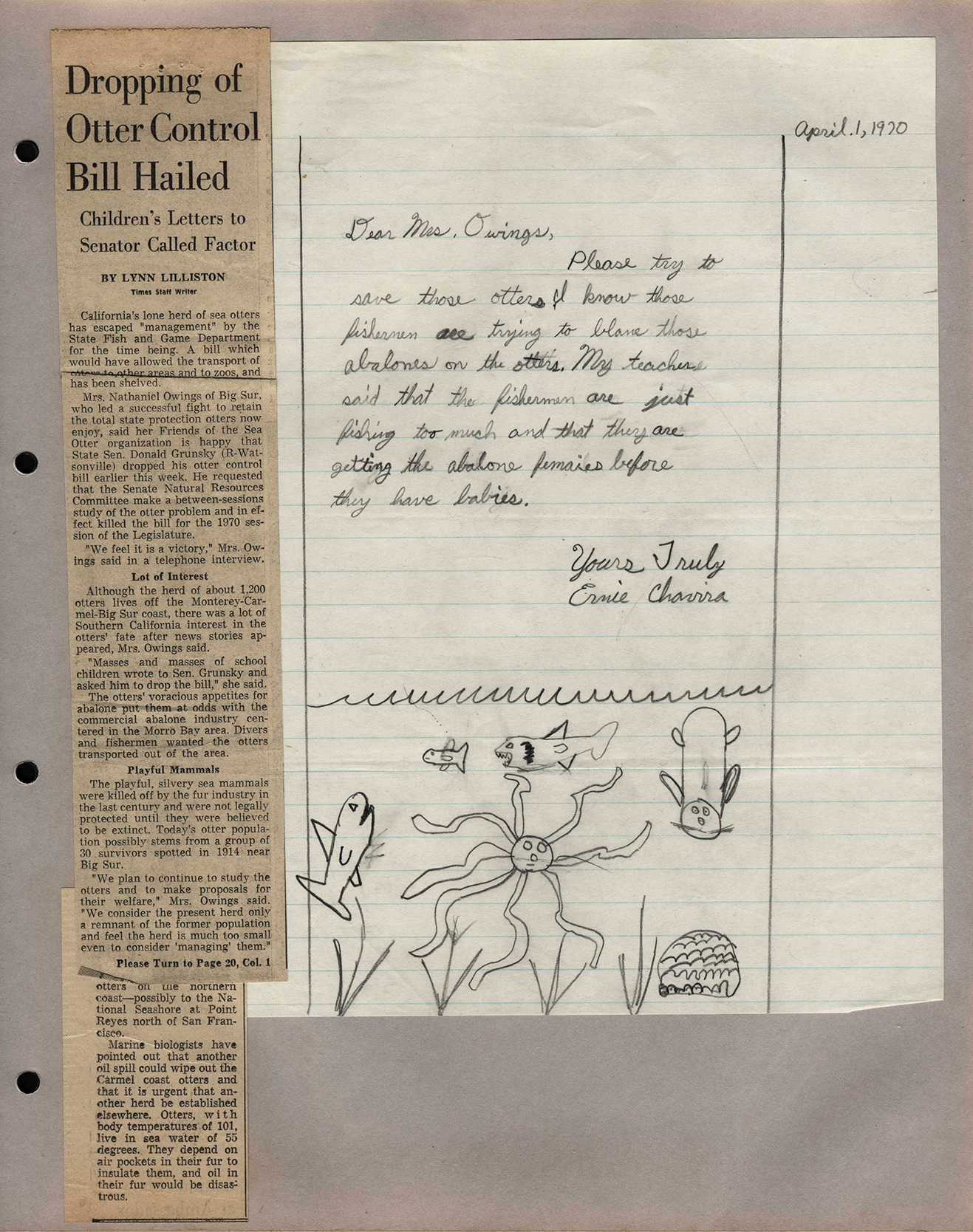 Mark Evanoff is an anti-nuclear environmental activist who advocated for opposition to nuclear proliferation, nuclear reactors, and the global nuclear arms race during the 1970s and 1980s. Following the successful citizen-led action movement, which lobbied against a planned nuclear power plant in Bodega Bay, California, from 1958 to 1964, Evanoff and other grassroots anti-nuclear activists sought to continue the battle to prevent nuclear power plants from being built in California and elsewhere. Evanhoff worked with numerous local and global anti-nuclear groups, mostly with the Abalone Alliance and the Friends of the Earth, in opposing the Diablo Canyon Power Plant. He additionally participated in protest actions, mobilized activists and prepared groups for non-violent civil disobedience training and legal defense, wrote, collected and disseminated educational literature and resources about nuclear power and disarmament. Evanoff was arrested twice for participating in blockades at Diablo Canyon and later served as consultant to the California Public Utilities Commission, weighing in on seismic factors and their potential to affect the sustainability of the plant. 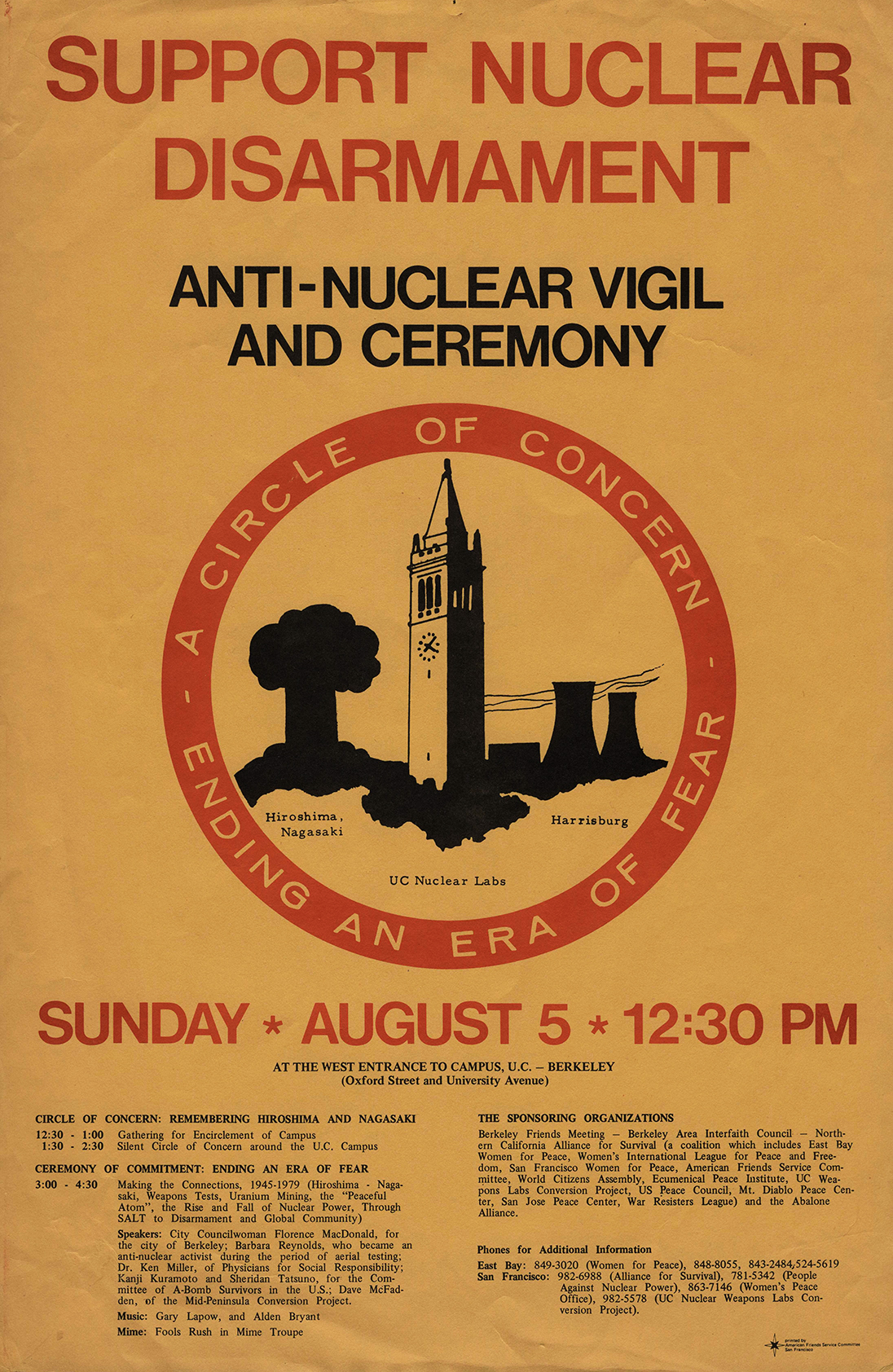 David R. Brower is considered by many to be the father of the modern environmental movement. He became the Sierra Club's first executive director in 1952. During his tenure, Brower helped guide the Sierra Club's rise to national prominence, building the organization's membership from 2,000 to 77,000 members. Under his direction, the Sierra Club led the effort to pass the Wilderness Act of 1964, halted dam construction that would have flooded Dinosaur National Monument, and pushed for the creation of the Kings Canyon, North Cascades, and Redwoods National Parks, and the Point Reyes and Cape Cod National Seashores. Brower also led the Sierra Club into one of its largest campaigns, the fight against proposed dams in the Grand Canyon. Later he founded Friends of the Earth in 1969 and Earth Island Institute in 1982. 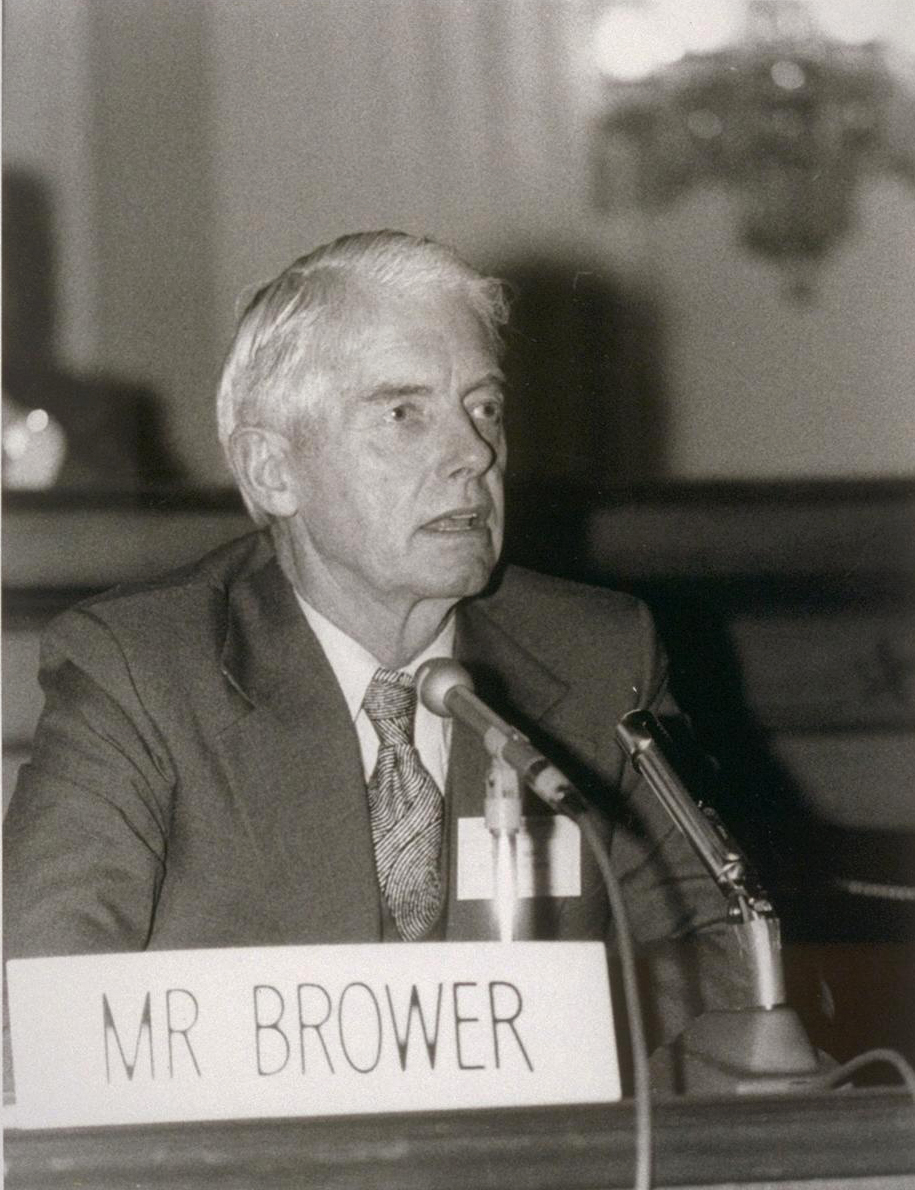 Woodbridge Metcalf was on the faculty of UC Berkeley's School of Forestry from its inception in 1914 until 1956. In 1926, Metcalf became the first extension forester for California, dedicating himself to public education in forestry and conservation for the next thirty years. He played a key role in the development of rural and forest fire protection programs in California, organized a number of 4-H summer camps to teach youth about forests and the California environment, advocated for better management of farm woods, studied the efficiency of windbreaks in the protection of citrus orchards in Southern California, and managed the university-owned Whitaker's Forest in Tulare County. In addition, he was the author of numerous forestry articles and pamphlets as well as censuses of trees in a range of California locations, including the San Francisco Bay region and the campus of UC Berkeley. 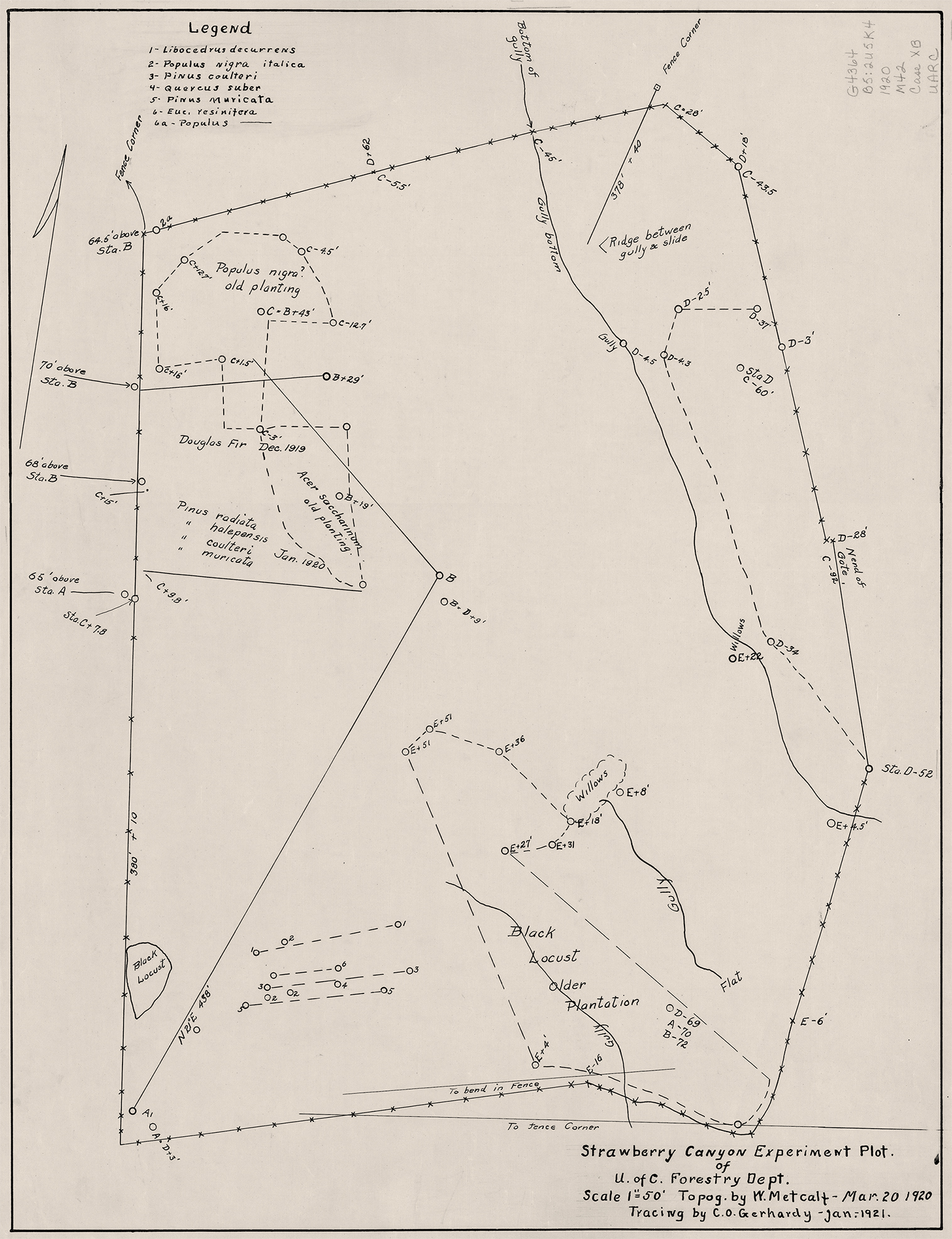 Robert Marshall, forester and environmentalist, served as director of forestry for the Office of Indian Affairs from 1933 to 1937. During this period, he, along with Benton MacKaye, Aldo Leopold, and others, established the Wilderness Society, an organization dedicated to preserving the wilderness in its unspoiled state. In 1937, Marshall was made chief of the new Forest Service Division of Recreation and Lands, but died suddenly of a heart attack in 1939 at 38. 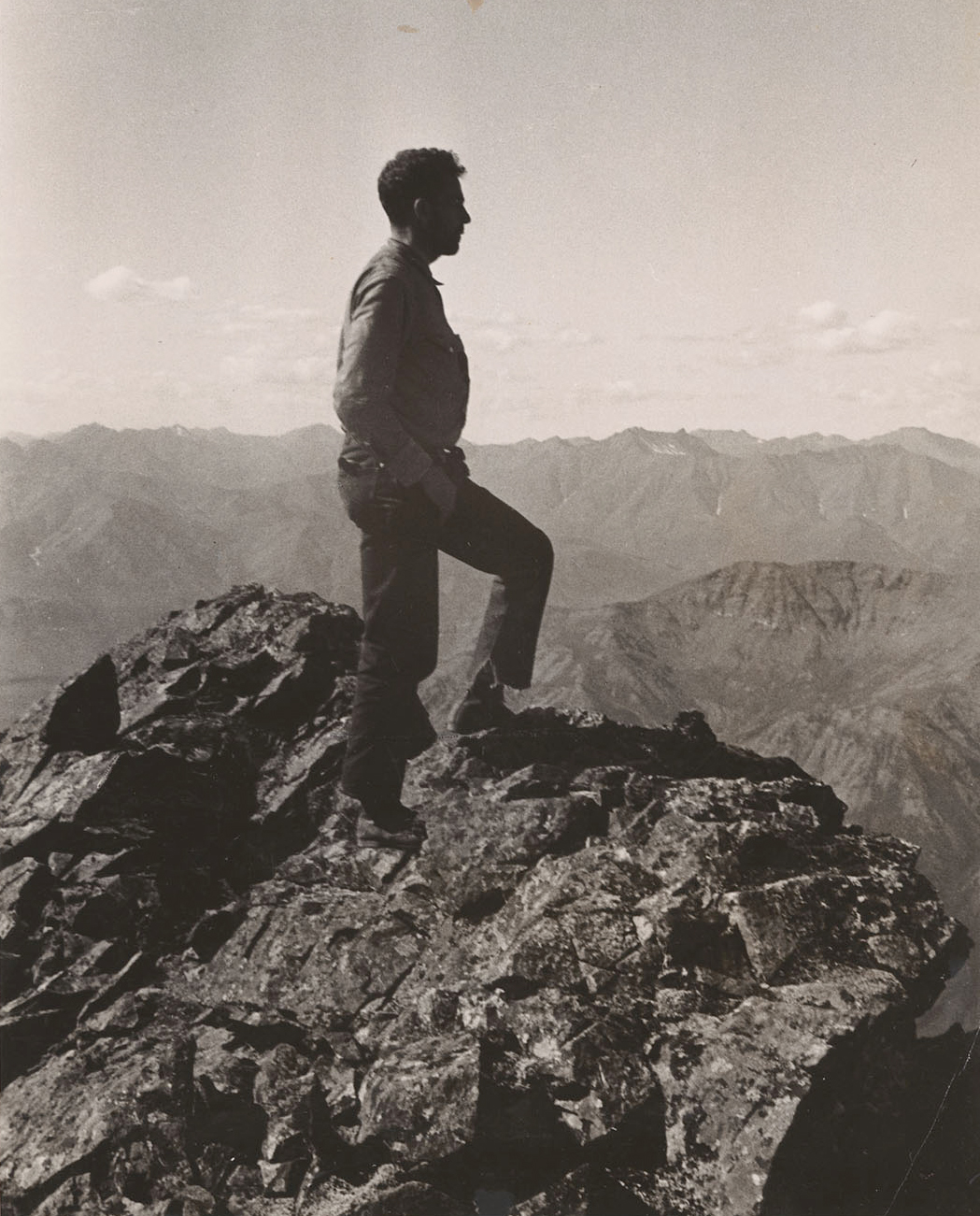 Aldo Starker Leopold was a wildlife biologist who made substantial contributions in the fields of ornithology, wildlife management and conservation, and public policy. He completed a Ph.D. in zoology at UC Berkeley in 1944, and in 1946 became assistant professor of zoology. He would continue as professor of zoology and forestry at UC Berkeley until his retirement in 1978. Leopold also served as associate director and director of UC Berkeley's Museum of Vertebrate Zoology. He was an active member of many conservation societies, including the Nature Conservancy, the Sierra Club, The Wilderness Society, the National Wildlife Federation, and the California Academy of Sciences. As chairman of advisory committees to the Department of Interior in the 1960s and 1970s, Leopold was instrumental in producing three major policy reviews with far-reaching impact: wildlife management in national parks, predator and rodent control, and management of the wildlife refuge system. 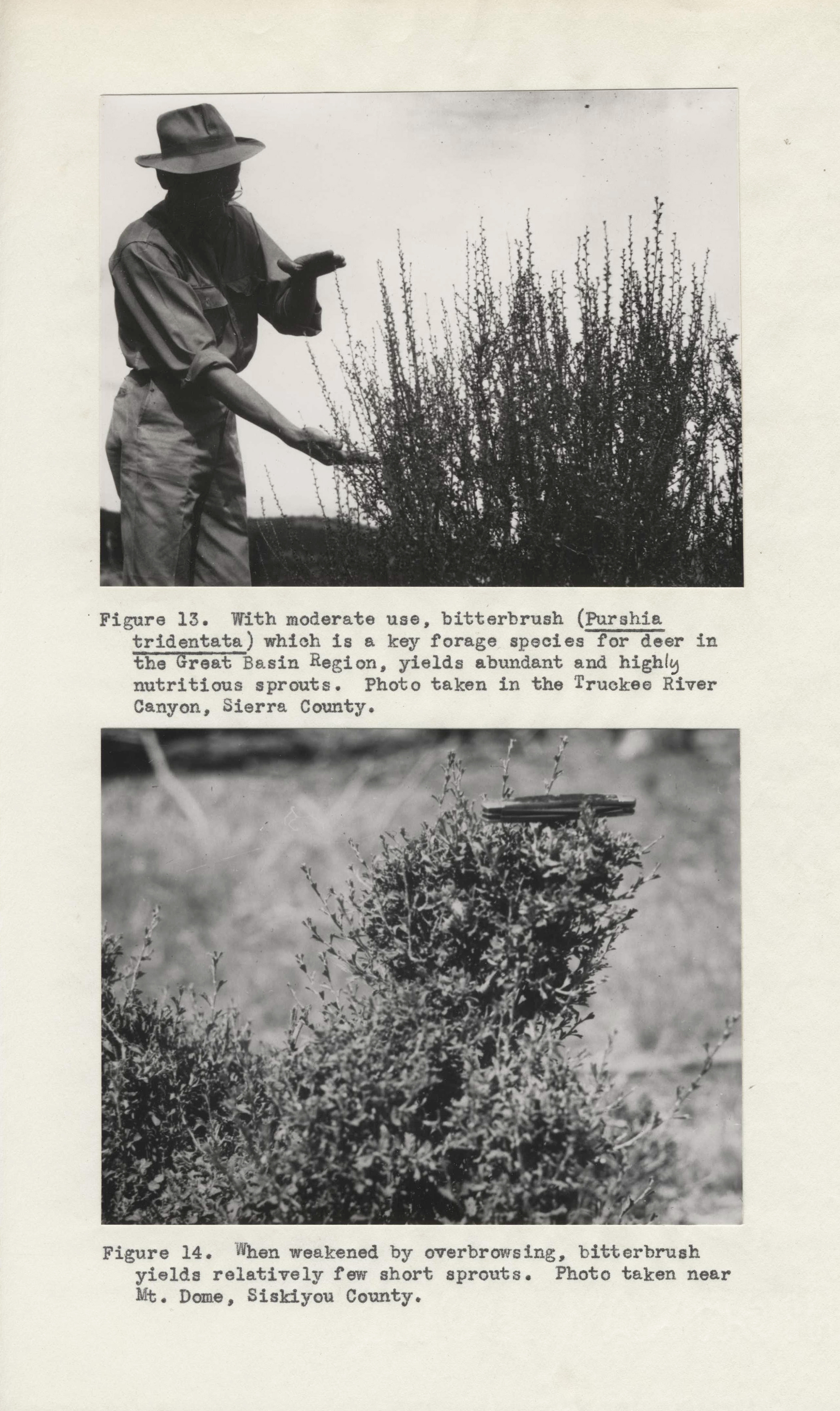 Figures 13 and 14 of A Survey of California Deer Herds, Their Ranges and Management Problems
Image citation: A. Starker Leopold papers, BANC MSS 81/61, Volume 5, The Bancroft Library, University of California, Berkeley

Mark Dubois began his career as an environmental advocate in 1973 when he took up the fight to save the Stanislaus River from being dammed, co-founding Friends of the River to organize the campaign. Dubois rose to national prominence when, in 1979, he chained himself to the Stanislaus River canyon bedrock as the new reservoir was being filled. His action resulted in a temporary halt in the filling of the reservoir, buying time for legal action and the formation of a legislative campaign to save the Stanislaus River. Despite these efforts, the reservoir was filled in 1982, but Dubois continued his work on behalf of the natural environment, co-founding the International Rivers Network in 1984 and serving as international coordinator for Earth Day 1990 and 2000. 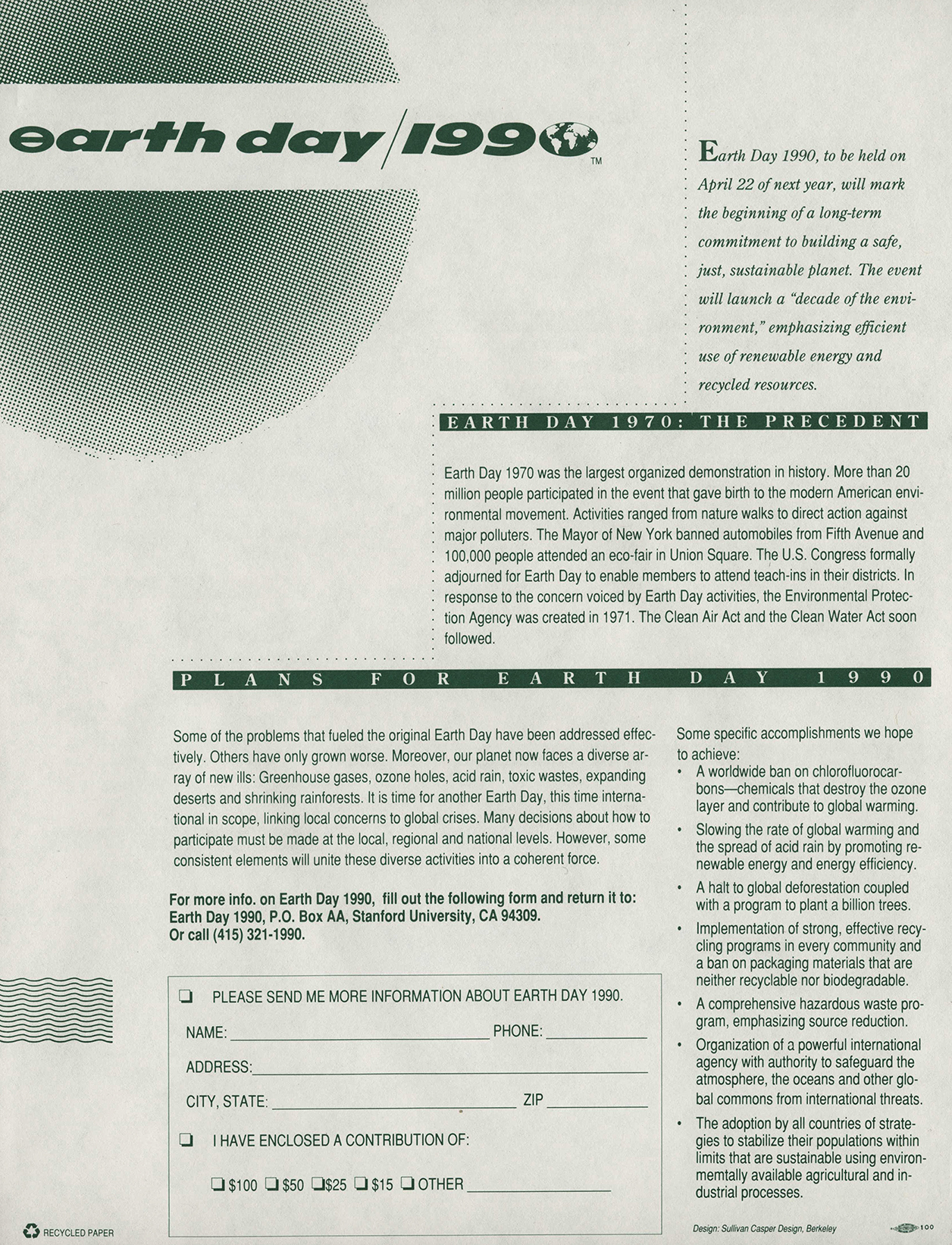