Documentation of the efforts of non-governmental groups to tackle a wide range of environmental issues in the twentieth century is comprehensive. Archival collections from trailblazing environmental organizations and their leaders represent an incomparable resource for study at local, regional, national, and international levels. Subjects covered include wilderness preservation, use of water resources, species survival, energy development, urban sprawl and its effects on the environment, and a more recent concern with environmental justice.

In addition to the Sierra Club, The Bancroft Library houses the records for numerous environmental organizations, from groups with global reach like Earth Island Institute to local grassroots such as Friends of the River. Environmental issues addressed are diverse, and these collections document the variety of ways the organizations have promoted their ideals, including fighting for legislation at the local, state and national level; the financing and orchestration of sophisticated public relations and educational campaigns; and the development of grassroots support for their causes.

Save the Redwoods League

Save the Redwoods League is a nonprofit organization founded in 1918 by three prominent conservationists, John C. Merriam, Madison Grant, and Fairfield Osborn. Its mission is to protect and restore California redwoods and connect people to the peace and beauty of redwood forests.

The fight to save the redwoods affected the preservation of land in parks throughout California. In 1928, the league led the campaign that won public approval of legislation that established the California state park system and allocated $6 million in funds to acquire state park lands. Multiple redwood preserves were established through the subsequent decades, and in 1968 Congress authorized the creation of Redwood National Park, due in no small part to the ongoing advocacy and activism of the league, its members and volunteers. Save the Redwoods League continues to protect redwood forests from logging and pollution, provides gifts to establish parks and preserves, and has active scientific research and education programs. 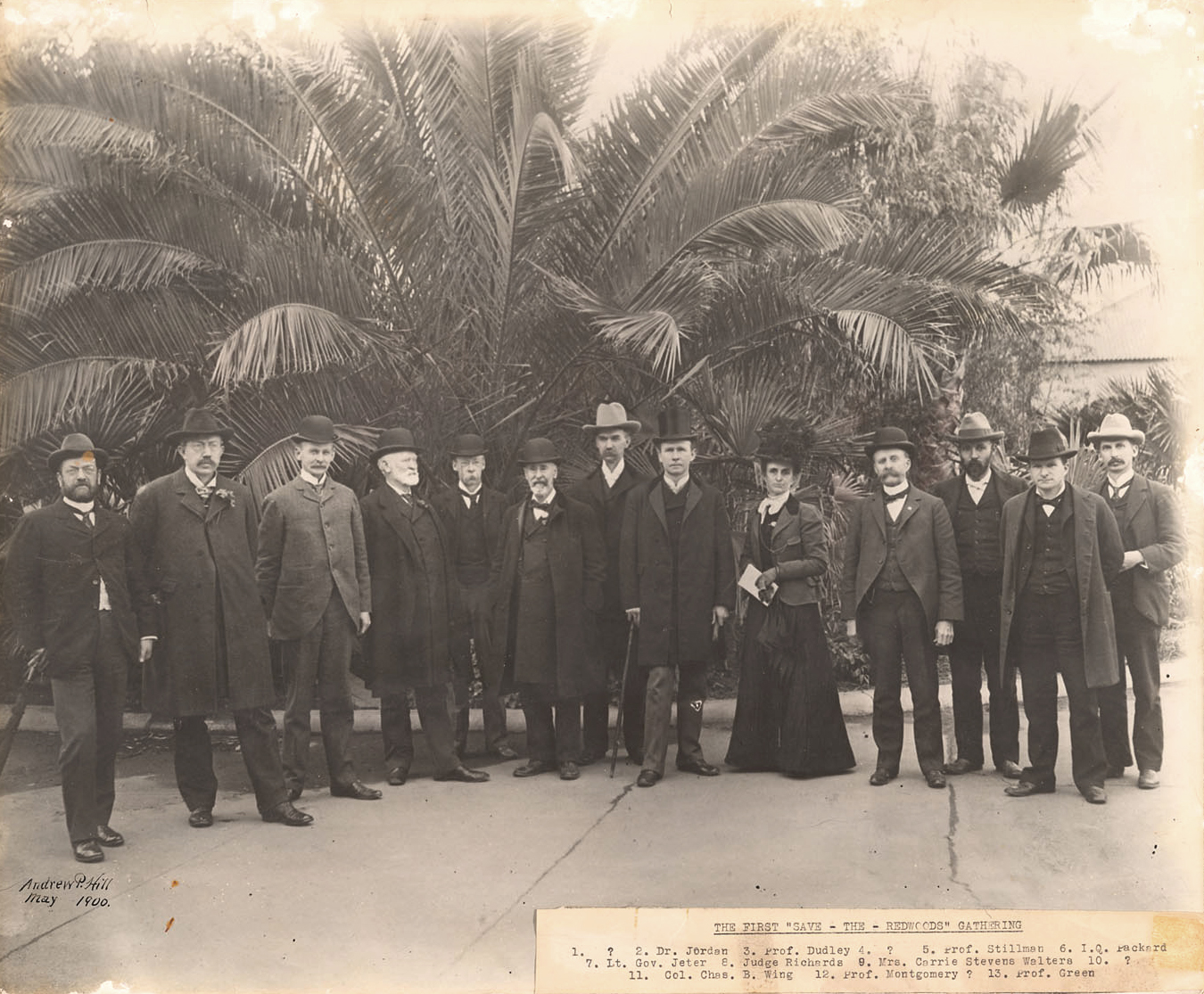 The Save San Francisco Bay Association, also known as Save the Bay, was founded by Esther Gulick, Catherine Kerr, and Sylvia McLaughlin in 1961 to protect open water, improve recreation opportunities, support wildlife conservation, beautify the shoreline, and promote resource planning. The three East Bay residents were concerned about discussions to fill in the Bay in order to gain more land for population growth. The Association mobilized thousands of members to stop bay fill and in 1965 won a legislative moratorium against placing fill in the Bay, the McAteer-Petris Act.

Save the Bay continues to monitor civic agencies to insure that they serve the public interests in maintaining San Francisco Bay as a natural resource, and also provides an arena for public participation in decisions affecting bay management and conservation. The association has initiated numerous legal actions against corporations and the legislature to prevent excessive bay fill, protect wildlife, and improve water quality and recreational access, often engaging in such legal action in cooperation with other environmental organizations such as the Sierra Club. 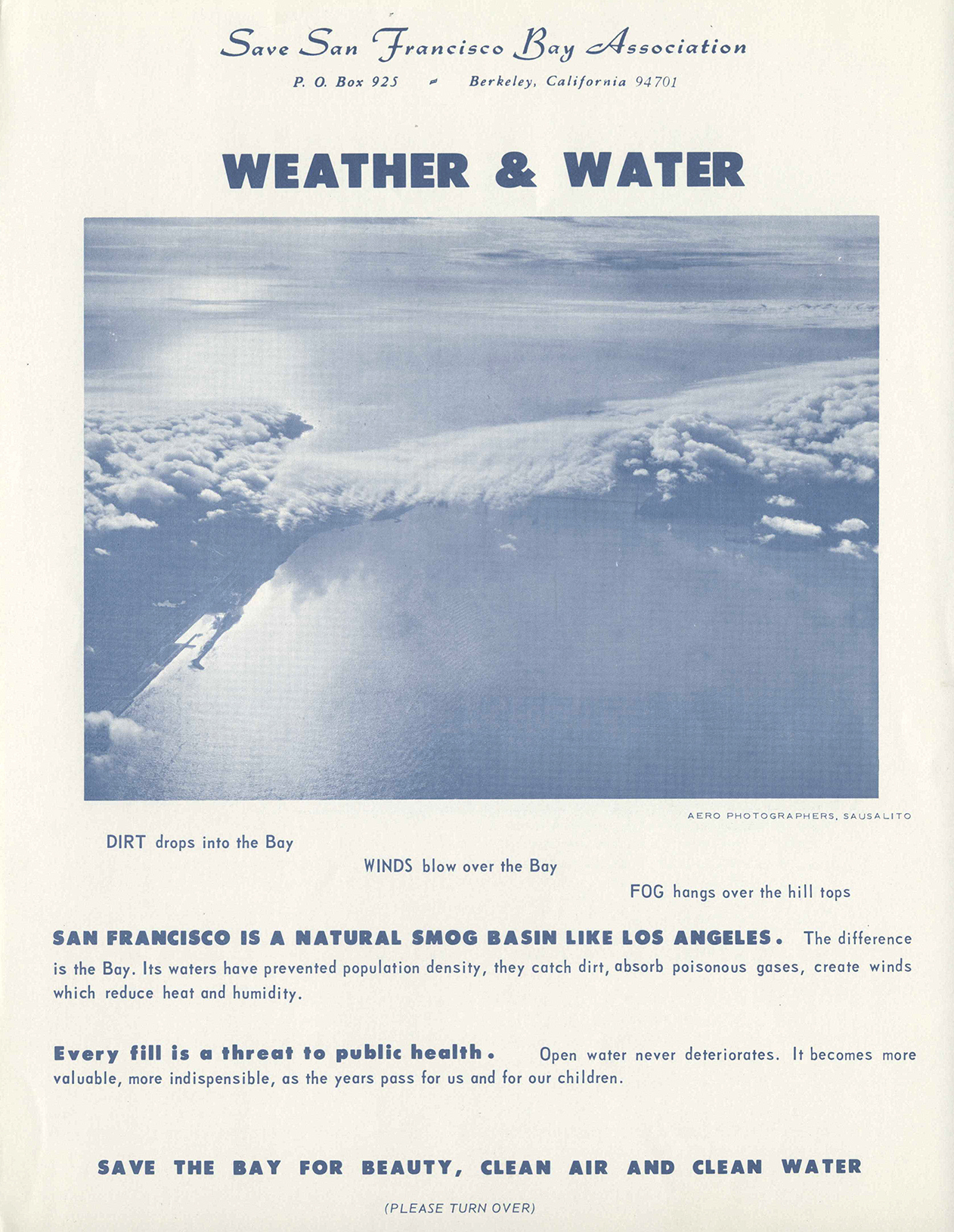 The Earth Island Institute is perhaps best known for two of its major projects - the Dolphin and Whale Project (including the Dolphin-Safe Tuna Campaign) and the Free Willy Keiko Foundation. 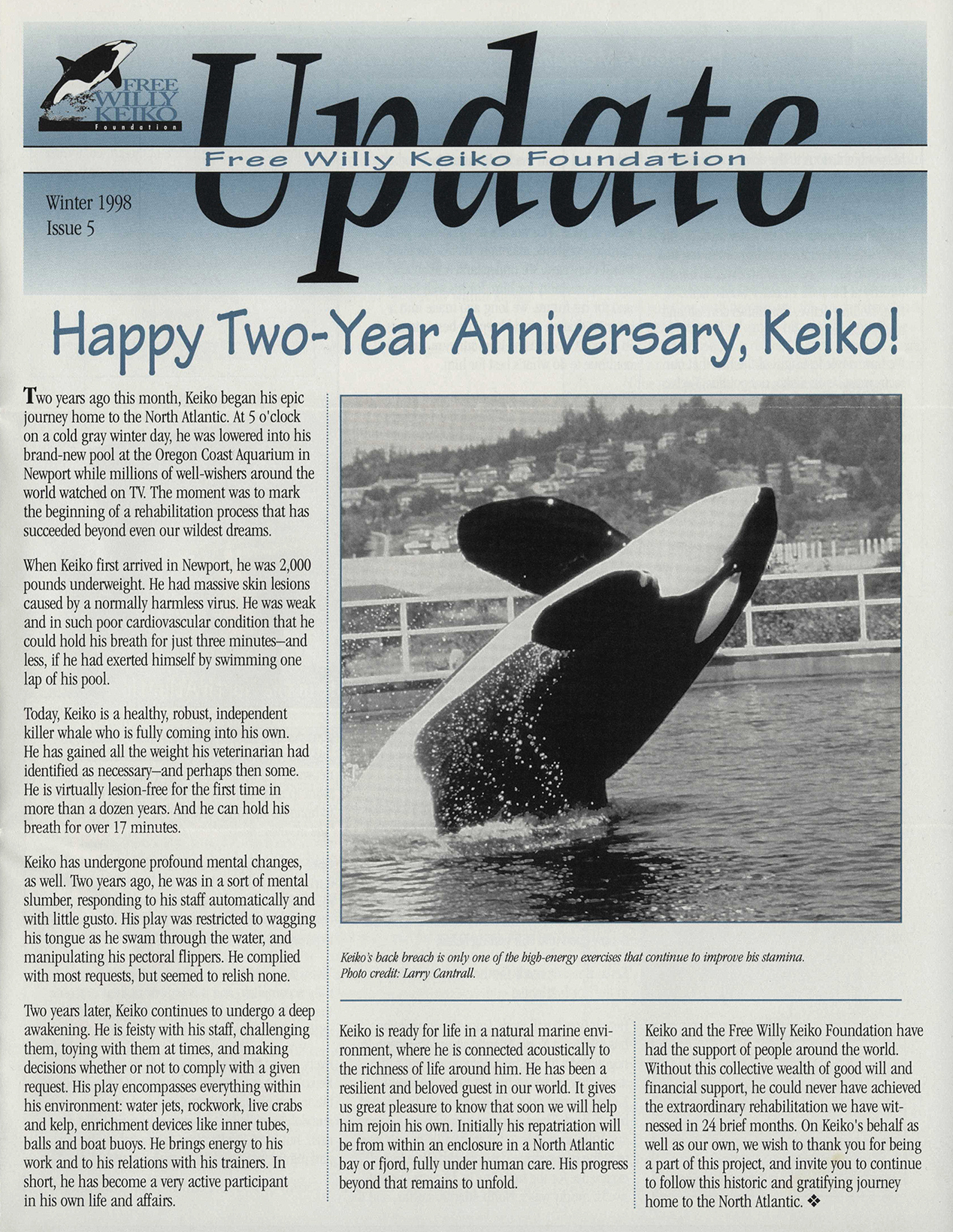 The Urban Habitat Program (UHP) was founded in 1989 by Carl Anthony, Karl Linn, and David Brower to build multicultural urban environment leadership for socially just, sustainable communities in the San Francisco Bay Area. UHP fosters and supports initiatives for social and ecological justice taken by historically disenfranchised communities: African, Latino, Asian/Pacific Islander, Native American, working and lower-income people. UHP has provided important links between environmental and social justice advocates by encouraging the environmental justice movement to include principles of sustainability and brings a vision of social justice to traditional environmentalists. UHP has helped build multicultural leadership for sustainable development in the Bay Area, while simultaneously broadening the definition of "sustainability" to include equity and justice. 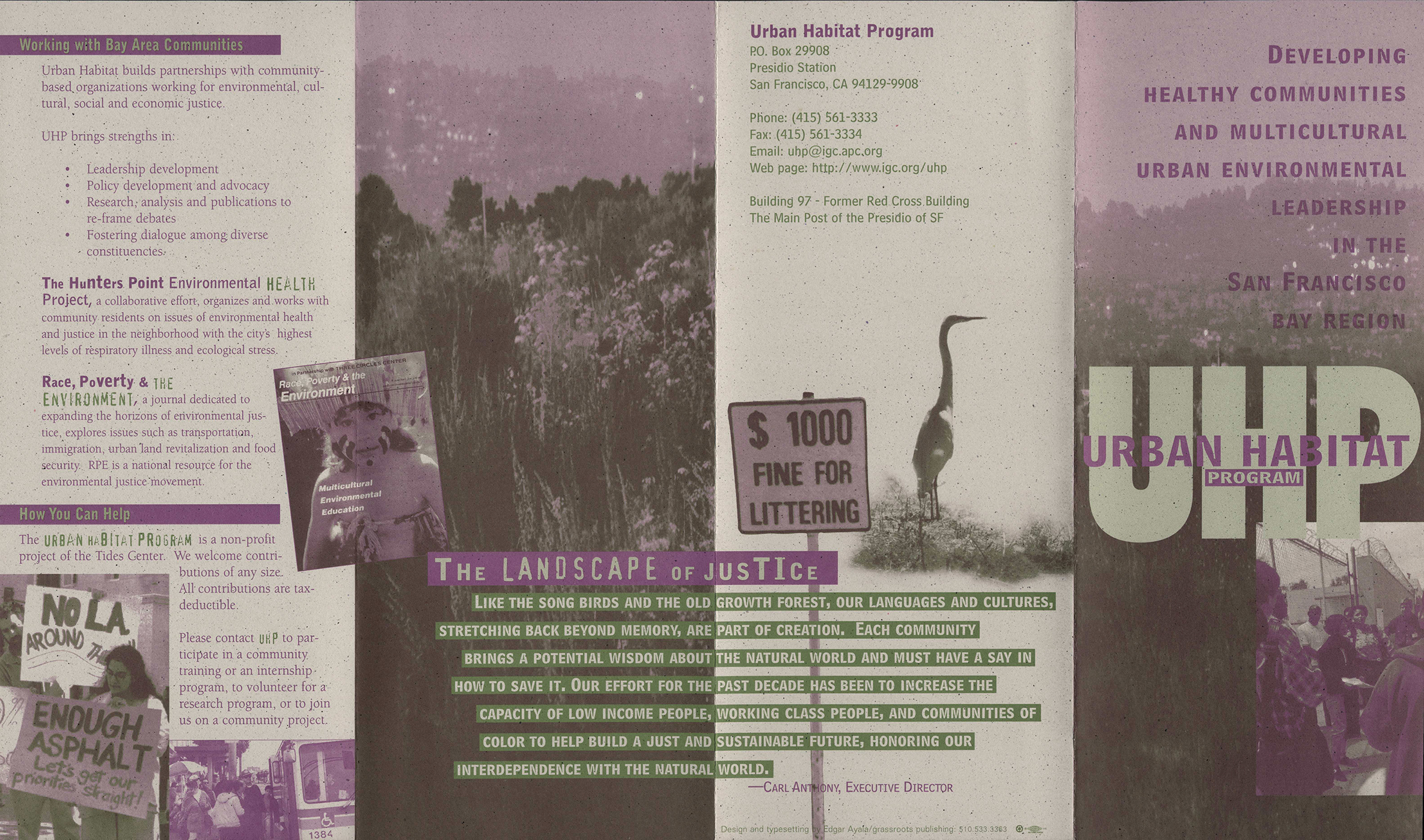 Friends of the Earth

Established as a non tax-deductible, non-profit membership organization focused on legislative and political action, Friends of the Earth (FOE) was founded by David Brower, Donald Aitken, and Gary Soucie in San Francisco and incorporated on July 11, 1969 in New York City. Since 1971, it has been composed of an international network of FOE groups now based in over 70 countries. Each international group is organized under the laws of its own country and works toward the common objective of advancing the preservation, restoration, and rational use of the Earth.

Successful campaigns of FOE include advocating and lobbying for the passage of pollution prevention regulations and policies, to protect wilderness and wildlife, and to conserve natural resources. 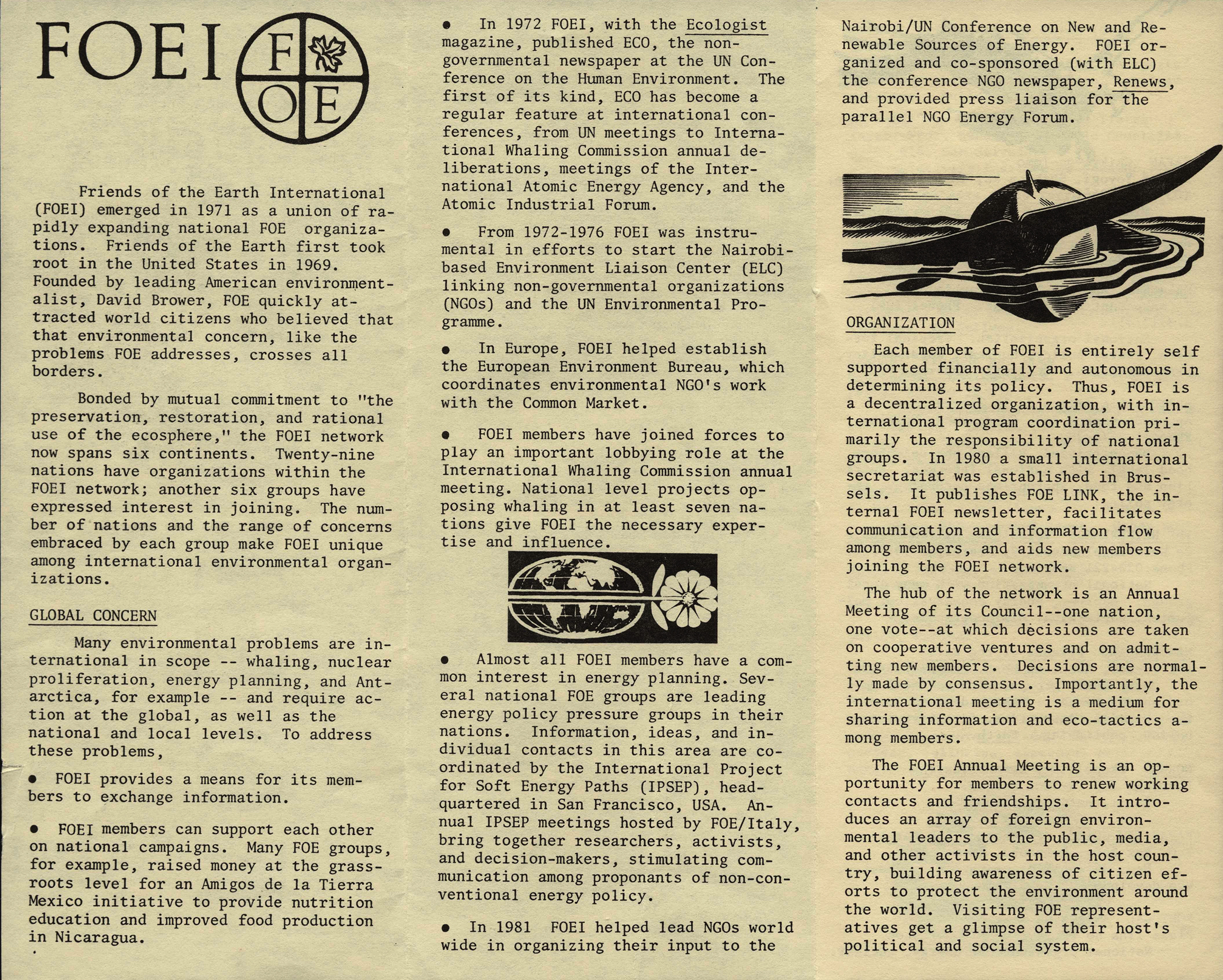 Friends of the River Foundation

In 1973, a grassroots conservation organization, Friends of the River (FOR), was established as an outgrowth of the signature-gathering campaign to stop the construction of the New Melones Dam on the Stanislaus River near Jamestown, California. In 1975, under the leadership of Mark Dubois and Jennifer Jennings, the Friends of the River Foundation was incorporated as a non-profit, membership based organization dedicated to river protection.

Although the New Melones Dam was eventually built and the lake filled in 1982, one of the campaign's most influential achievements was to crack open the debate about the cost effectiveness and benefits to society of large dam projects around the globe. No other dams of this magnitude have been constructed in the United States since the completion of the New Melones Dam, and the struggle to save the Stanislaus River from its construction remains one of the greatest examples of citizen involvement in American history to stop a dam from being built. The Friends of the River Foundation continues to push for water-protection legislation in California through grassroots organizing, public outreach, and education. 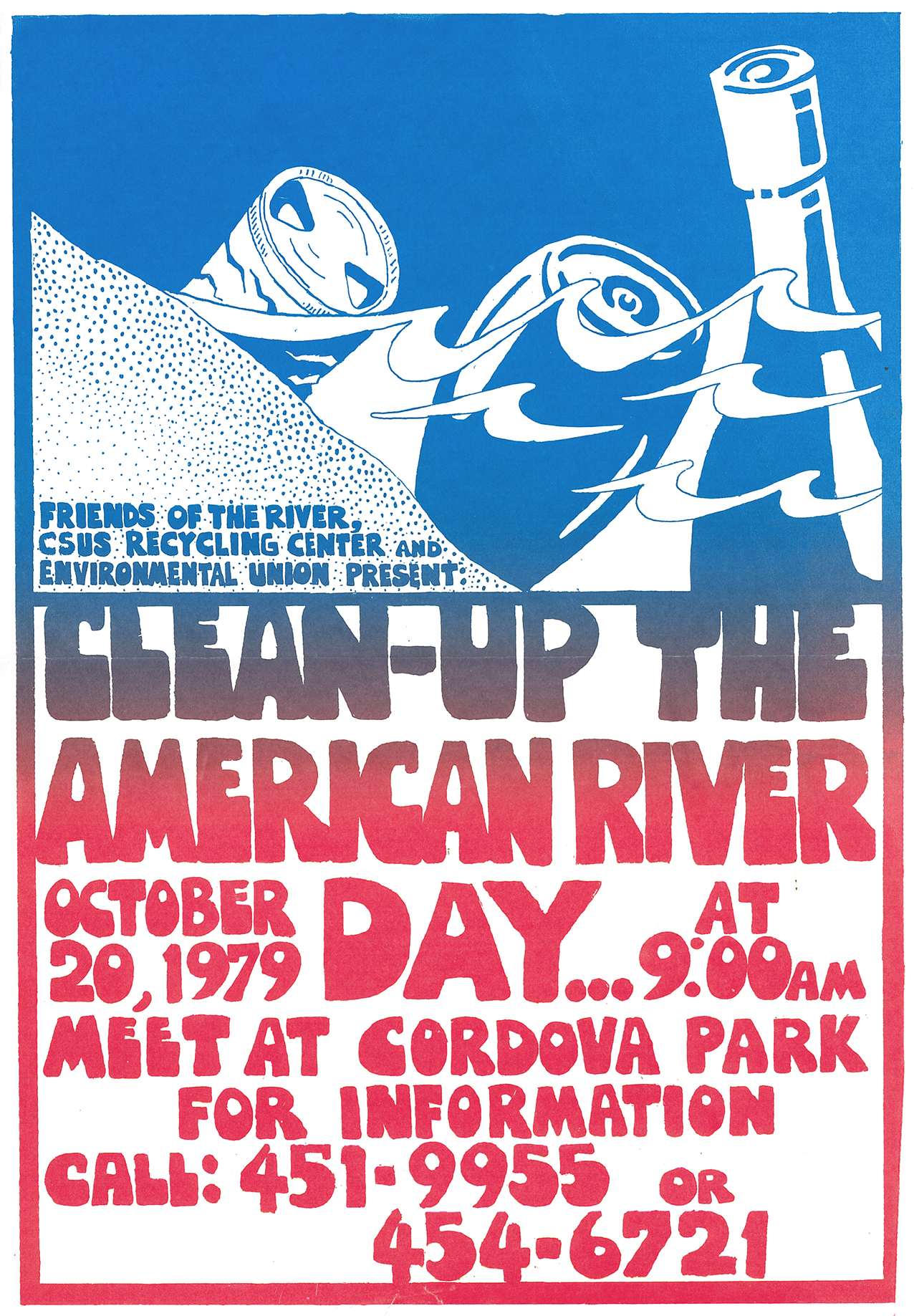 Founded in 1985 by Randy Hayes, Rainforest Action Network (RAN) is an environmental organization that campaigns for the preservation of rainforests and the rights of the Indigenous peoples who live within those forests. The global breadth of RAN's activities range from Old Growth campaigns in Northern California, the Pacific Northwest, and Canada to Tropical Timber campaigns to protect forests and Indigenous rights in Central and South America, Africa, Tasmania, and Southeast Asia. They also include the Global Finance campaign, which organized and supported civil disobedience during the World Trade Organization meetings in Seattle, Washington, in 1999. 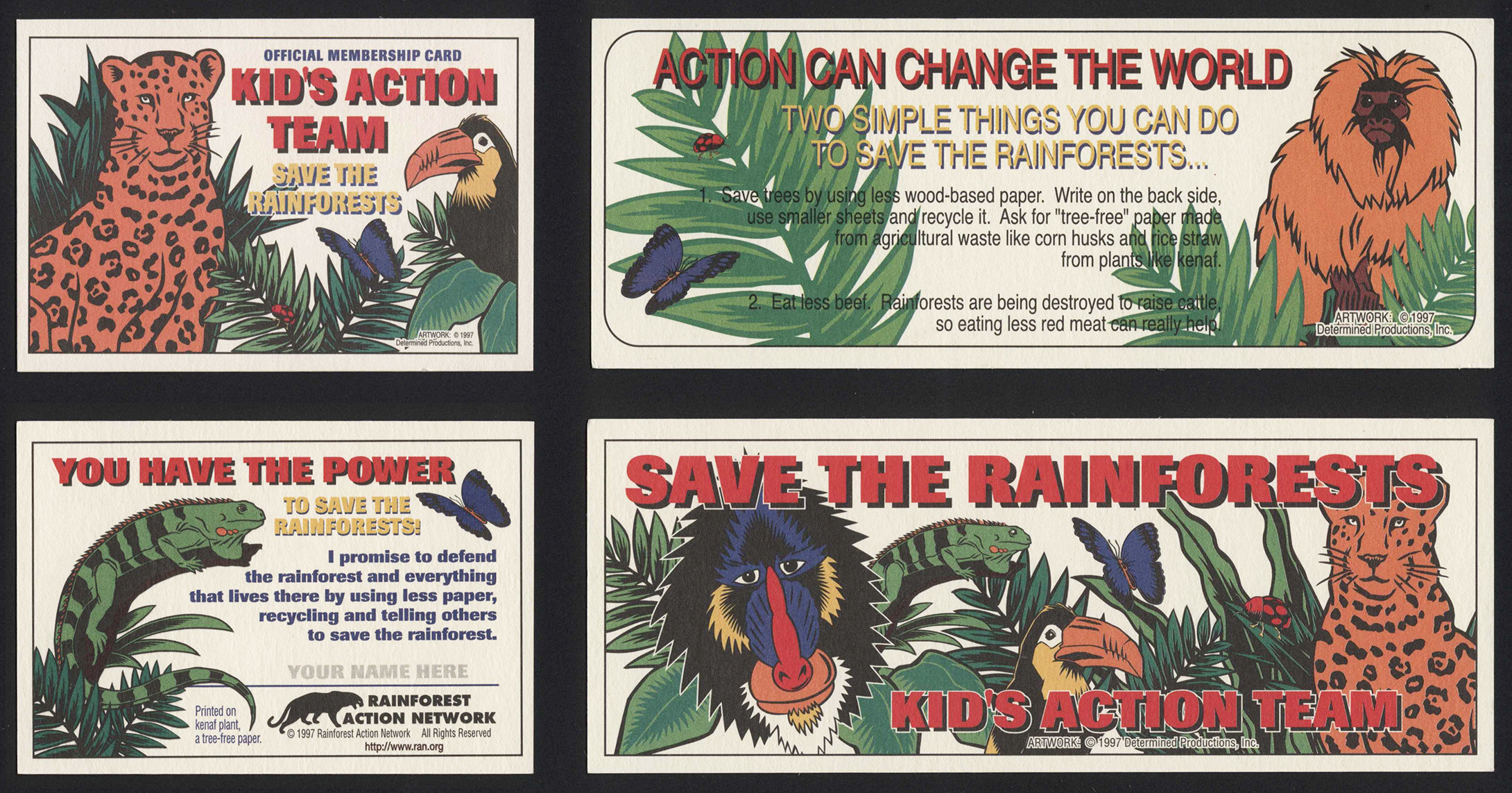 Arizona Toxics Information is a not-for-profit organization founded by Michael Gregory in 1990, focusing on environmental concerns on the Arizona and California border regions of the U.S. and the two Mexican states directly south in Sonora and Baja California. Arizona Toxics Information advocates for change in hazardous materials policy and management in order to protect public, occupational, and environmental health. The organization also seeks to sustain cultural and natural resources by providing access to reports, public presentations, and workshops to the public and policy makers in an effort to educate them about occupational health and safety, as well as chemical and other toxic hazards. The organization also ran several successful campaigns to shut down the Phelps Dodge Corporation's Douglas Reduction Works (copper smelter), the ENSCO hazardous waste management facility (PCB incinerator), and to improve the overall air and water quality of Arizona. 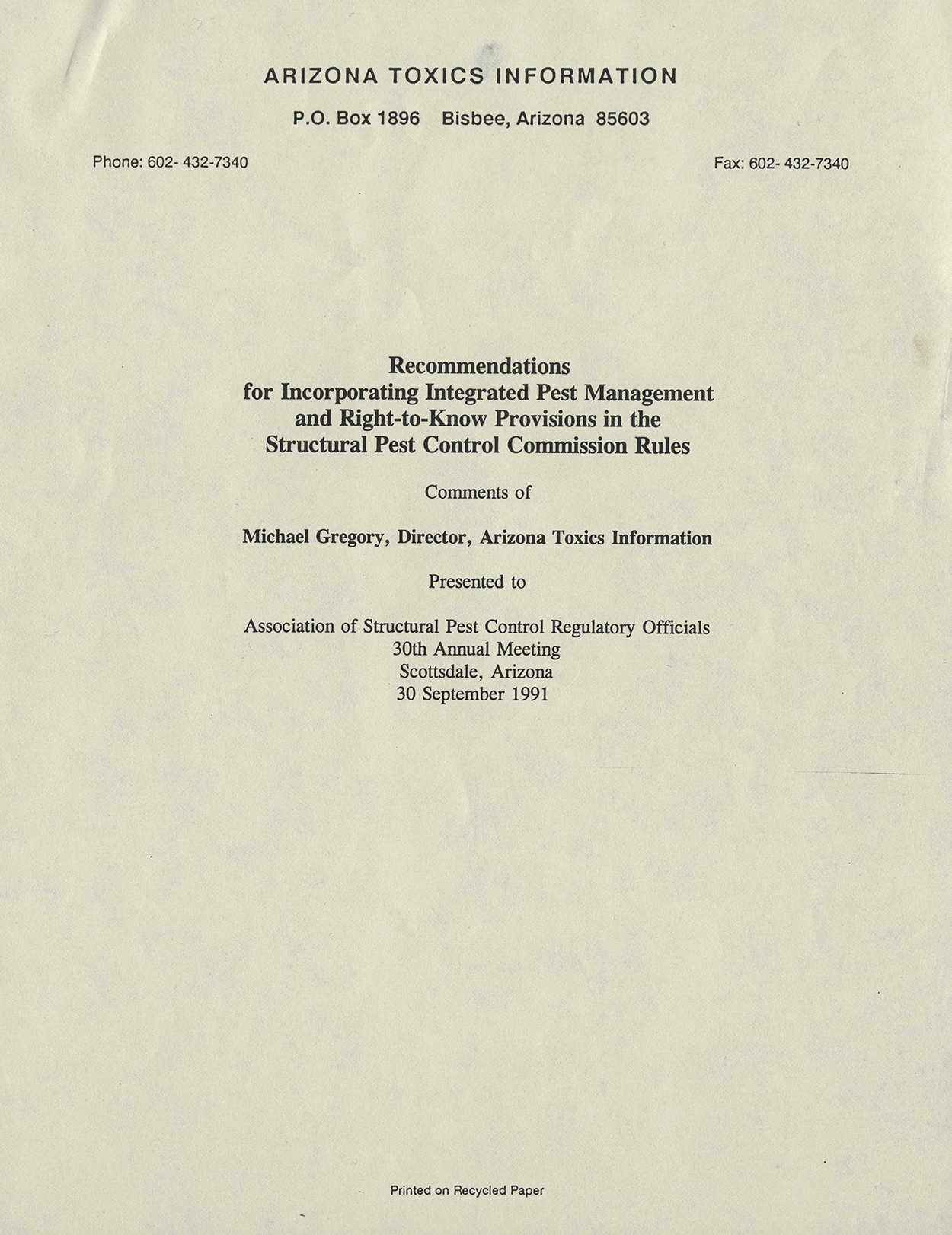