In addition, The Bancroft Library holds the papers of various politicians such as state governors, senators, and congressmen, many with ties to California and the Bay Area. Within their collections are a variety of legislative files on environmental issues.

In 1851 the U.S. Congress passed "An Act to Ascertain and Settle Private Land Claims in the State of California," which required all holders of Spanish and Mexican land grants to present their title for confirmation before the Board of California Land Commissioners. Land from titles not confirmed became part of the public domain. This act placed the burden of proof of title on landholders and initiated a lengthy process of litigation that resulted in most Mexican Californians, or Californios, losing their titles.

The confirmation process required lawyers, translators, and surveyors, and took an average of seventeen years to resolve. The resulting court records—the land cases—include petitions, transcripts, witness depositions, materials presented as evidence, other legal documents, and maps. These land cases and accompanying maps have been used extensively in historical ecology studies throughout California to support the development of restoration strategies and management decisions for natural hydrology and habitats. 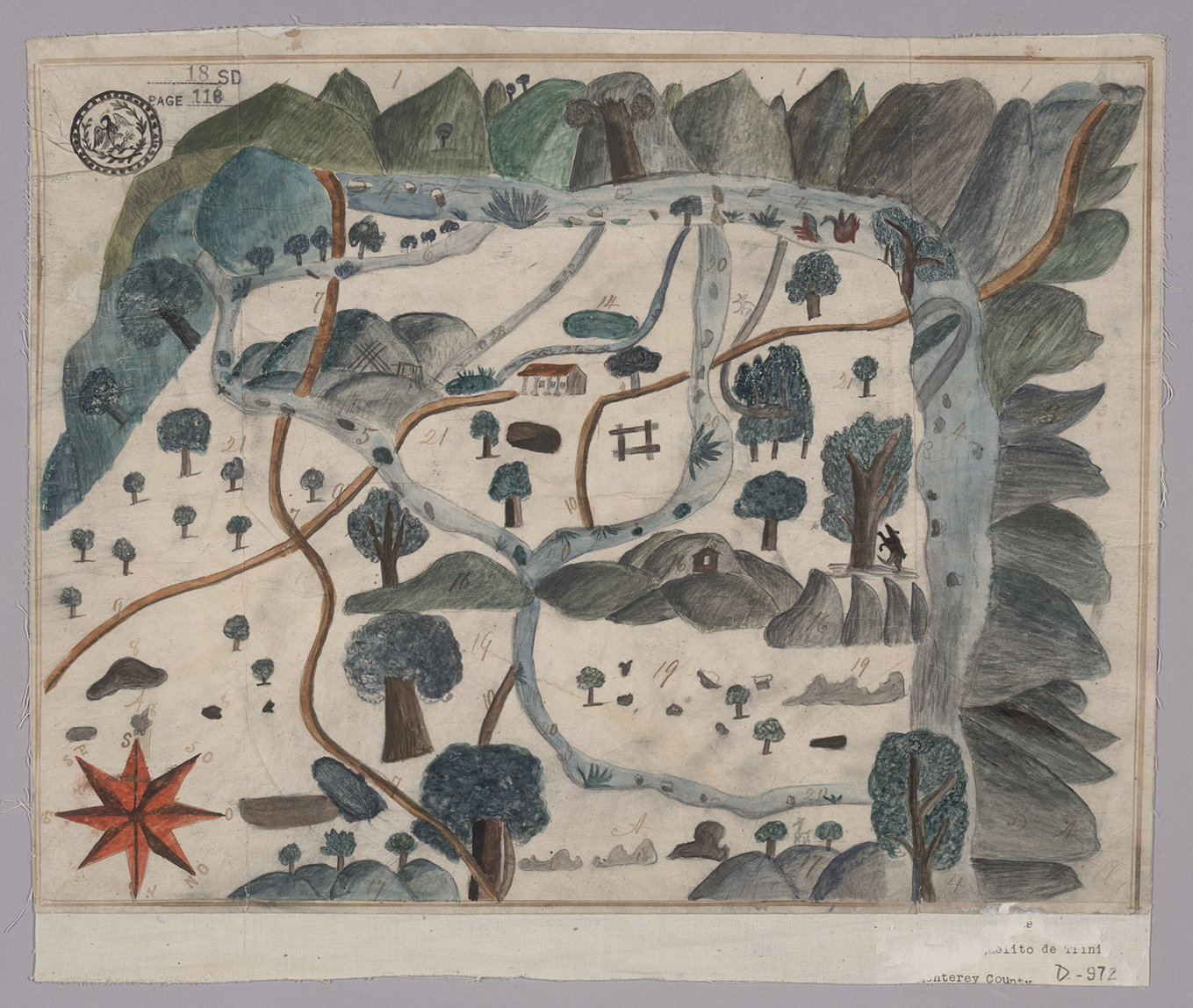 The Sierra Club California Legislative Office, located in Sacramento, began its work in the late 1960s. It was one of the first offices established to work strictly on state-level environmental legislation. The staff consists of a state director, legislative representatives, the editor of the Sierra Club California Legislative Agenda newsletter, and a fundraising coordinator. Some of the early successes under the leadership of John Zierold include the legislation that created the Tahoe Regional Planning Agency, the San Francisco Bay Conservation and Development Commission, and the California State Solid Waste Management Board.

The Sierra Club Legal Defense Fund (SCLDF) was established in San Francisco in 1971, with funding from the Ford Foundation and the Sierra Club Foundation. Their first major case was against Walt Disney Productions to prevent the establishment of a major ski resort at Mineral King, California. The decade-long campaign to halt the developments, which began with the Sierra Club in 1969, resulted in the addition of Mineral King to Sequoia National Park in 1978. The SCLDF has since been involved in many other landmark environmental law cases throughout the United States, defending federally protected lands and communities from clearcutting, mining, power plants, and hazardous waste. In 1997, the SCLDF changed its name to Earthjustice. 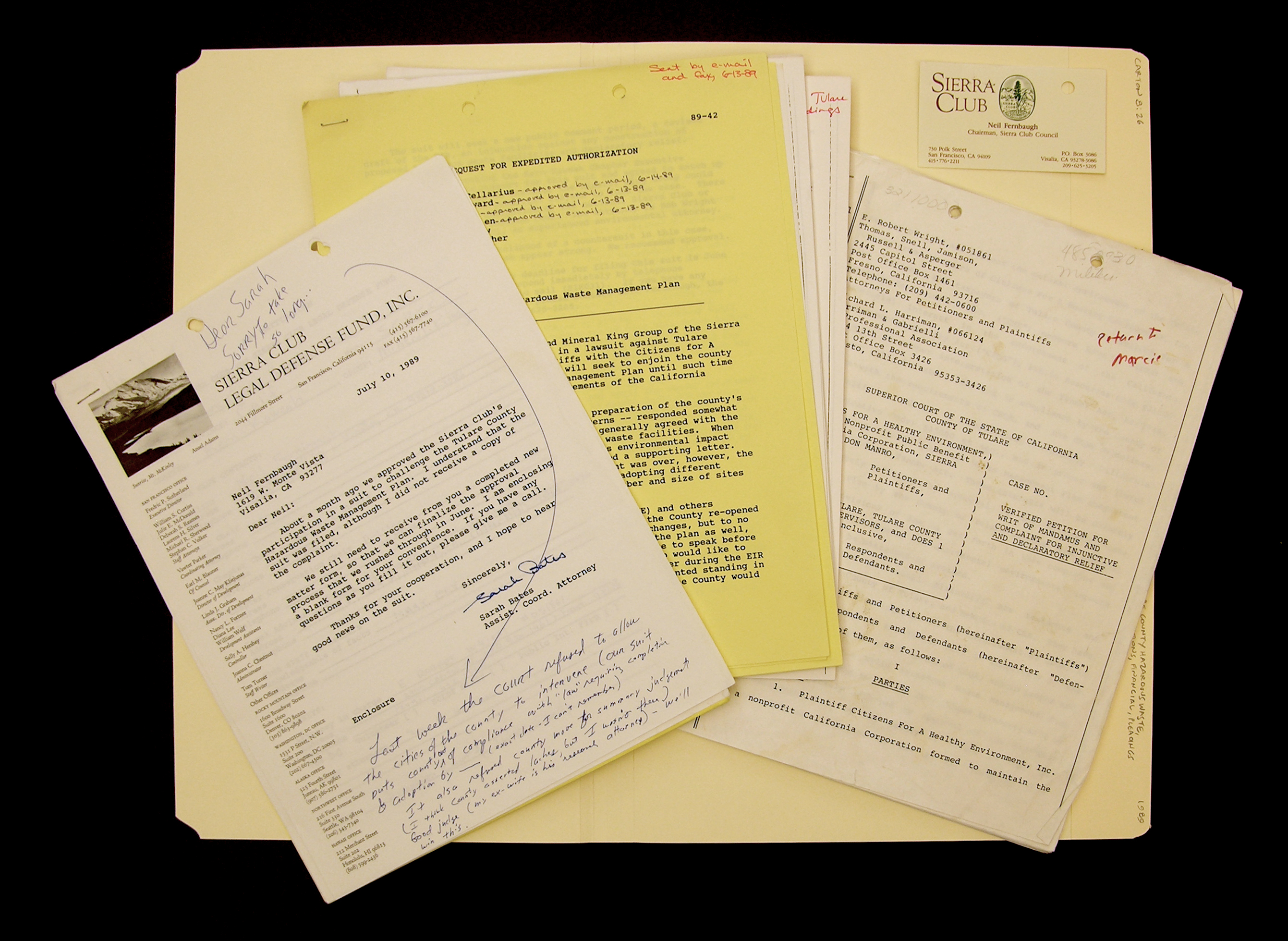 In 1965, the Meiklejohn Civil Liberties Institute (MCLI) was founded in Berkeley, California, with the goal of uniting activists for civil liberties as well as documenting legal strategies for future use. While initially focused on developing legal strategies against the Vietnam War, racism in jury selection, and opposition to school integration, the MCLI rapidly expanded its interests to the defense of all aspects of human rights, including environmental protection to ensure quality of life. The MCLI continues to carry on a wide range of activities, including research, publication, advocacy, and education. 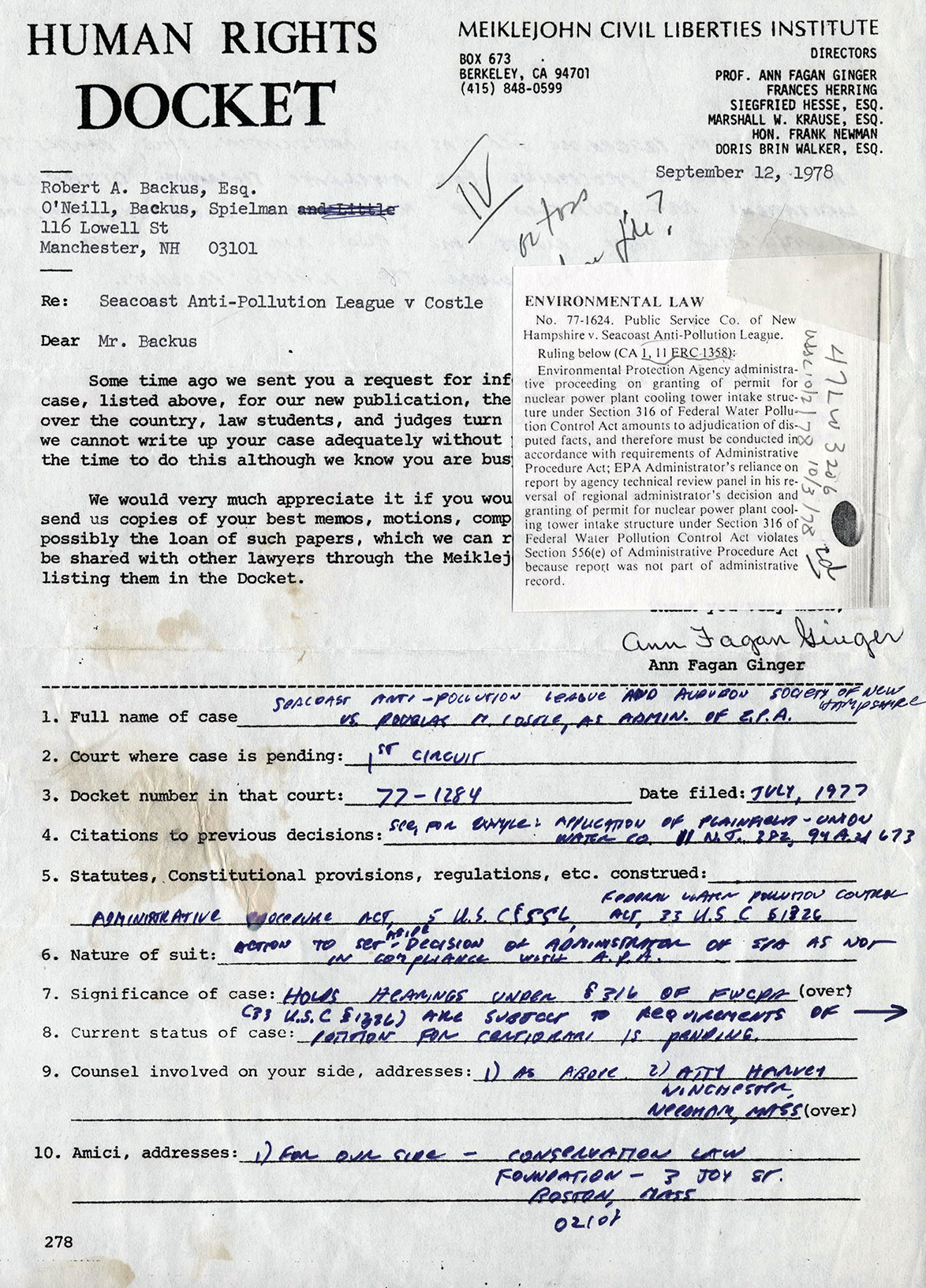 John T. Knox, Democrat, was a California Assembly Member who served from 1960 to 1980, representing California's 11th District. He authored numerous assembly bills, including the McAteer-Petris Act, which established the San Francisco Bay Conservation and Development Commission in 1965 as well as the California Environmental Quality Act of 1970. 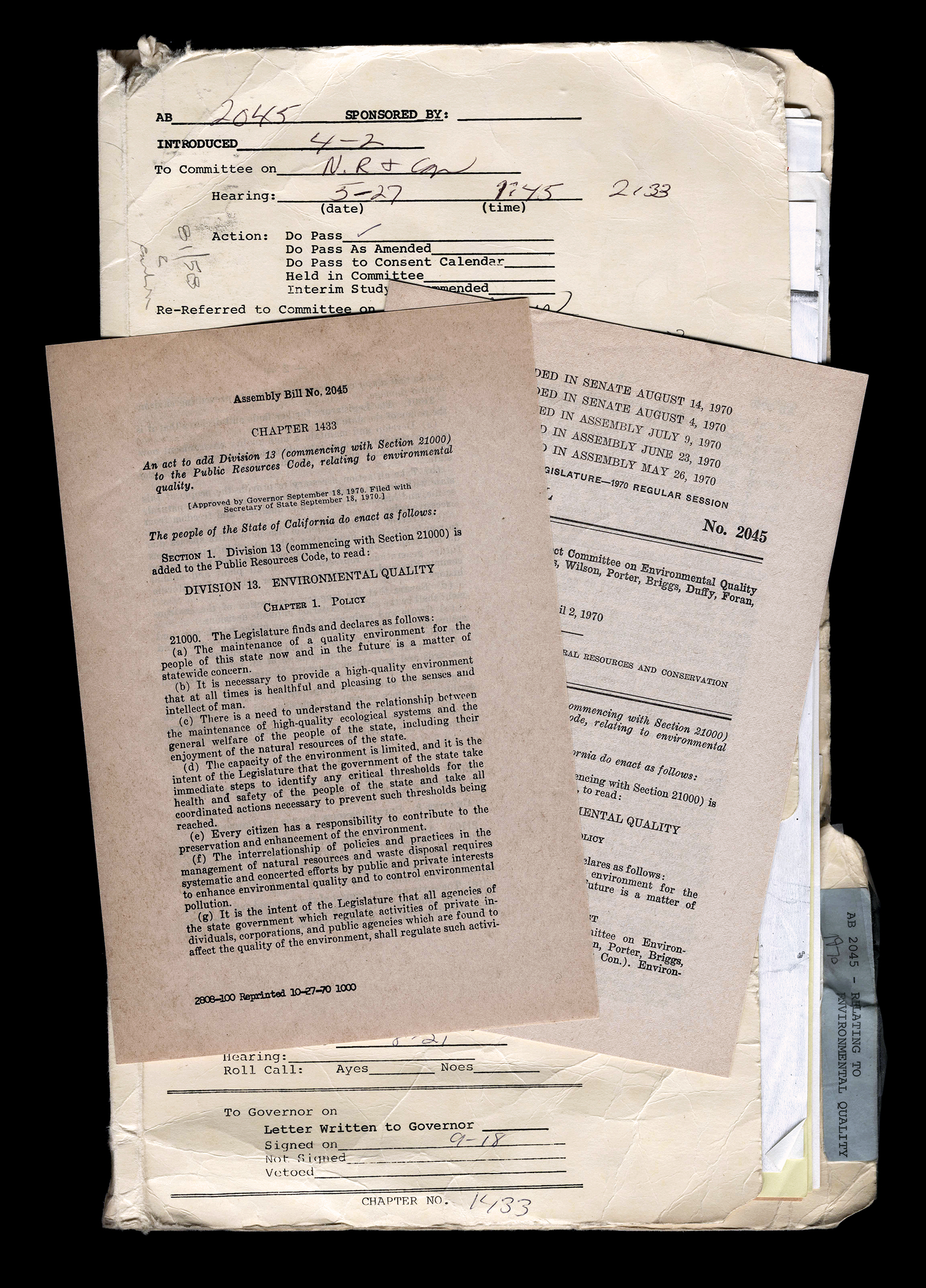 David E. Pesonen was an environmental activist, lawyer, and judge in the San Francisco Bay Area. After graduating from UC Berkeley's School of Law, he began work at a San Francisco law firm and became involved in the anti-nuclear movement. He was elected chairman of Californians for Nuclear Safeguards and was one of the authors of Proposition 15, an unsuccessful 1976 ballot initiative to restrict nuclear power production in California. He was, however, involved in the successful opposition of proposed nuclear power plants near Bodega Bay, in Sonoma County, and Point Arena in Mendocino County. Pesonen also served as the director of the UC Berkeley Department of Forestry from 1979 to 1982. 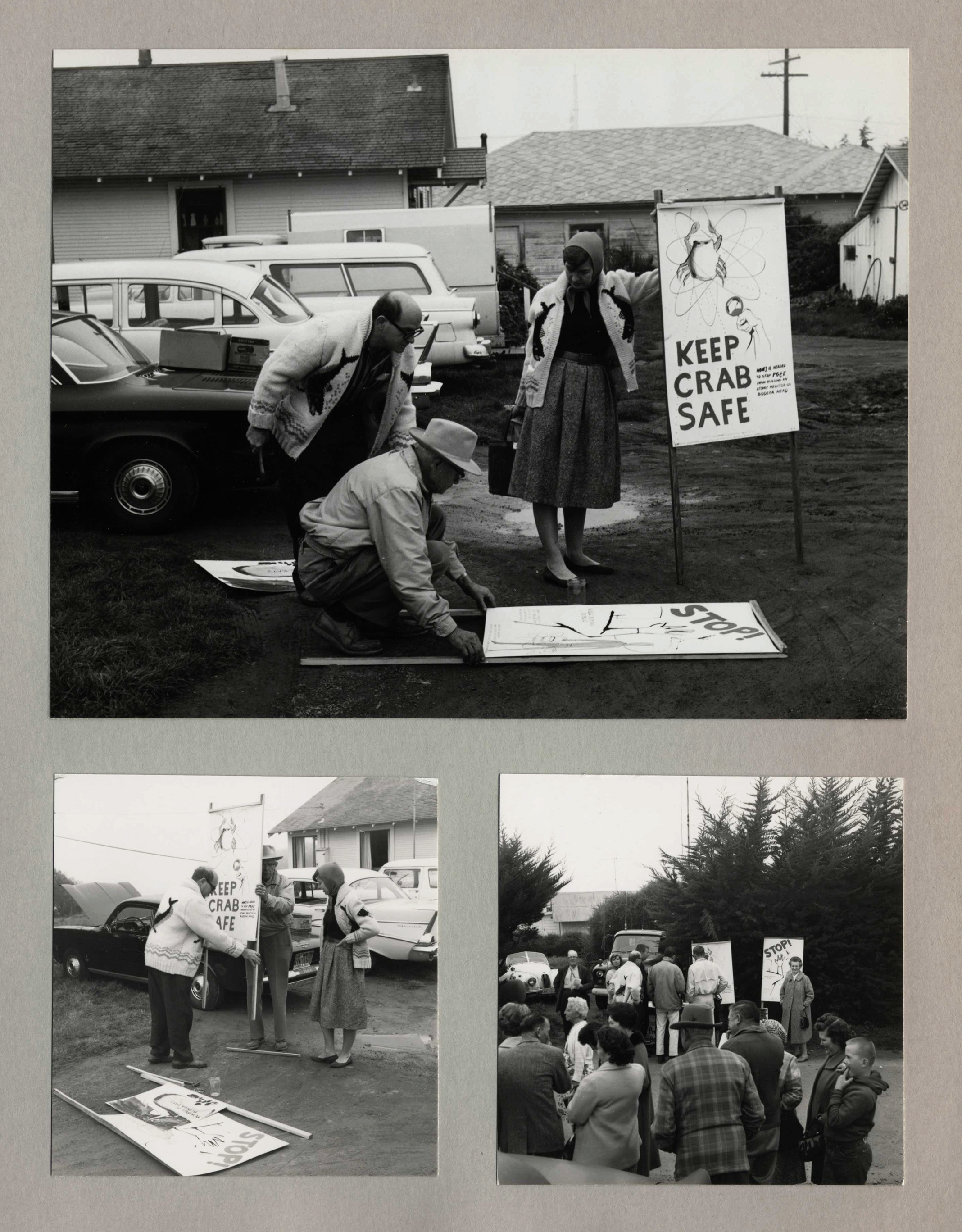 Thomas J. Graff was the western regional director for the Environmental Defense Fund (EDF), beginning in 1971. An environmentalist and an attorney, he was involved in shaping key legislation concerning water policy, climate issues, and ocean protection. He was instrumental in the passage Central Valley Project Improvement Act of 1991, which established a "water market" through which farmers were allowed to sell unused water as an incentive to conserve. He led the campaign against a plan by the East Bay Municipal Utility District (EBMUD) to tap into the American River. Graff also played a key role in the effort to pass AB32, legislation that requires California to cap its total greenhouse gas emissions at 1990 levels by 2020. 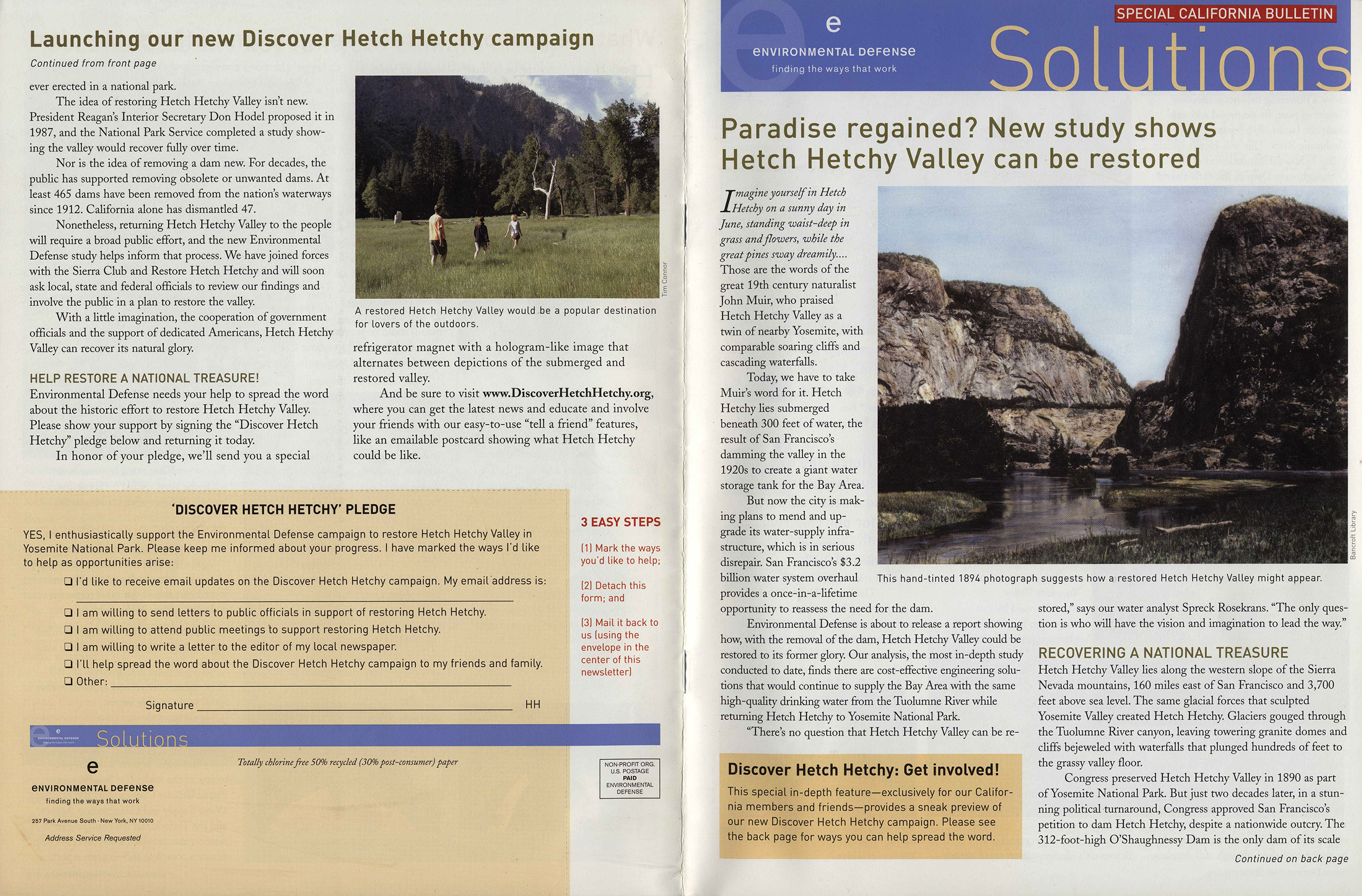 Documents pertaining to the adjudication of private land claims in California, 1852-1904
BANC MSS Land Case Files (microfilm use only, original documents restricted due to fragility)

The Land Case Files originally formed part of the private land claims adjudicated by the U.S. District Courts of California (Northern and Southern Districts). Materials include transcripts, witness depositions, materials presented as evidence, and other legal documents. There are 857 total cases represented. This collection is instrumental in determining early land and water boundaries and usage of early California.
► Collection Finding Aid

This collection contains substantial research files gathered by SCLDF attorneys during the ten years of litigation against Walt Disney Productions' planned ski resort in Sequoia National Forest at Mineral King, California. Recent additions cover environmental litigation cases of the SCLDF as well as amicus briefs where the SCLDF role was that of amicus curiae (friend of the court).
► Collection Finding Aid

This collection consists of material relating to Cranston's pre-Senatorial career, Senate career, and other political activities. Of interest are the legislative files on environmental issues.
► Collection Finding Aid

This small collection contains correspondence regarding proposed legislation to enlarge Sequoia National Park along with copies of congressional bills, with related maps and reports.

This collection relates to the campaign for a comprehensive state park program. Included are copies of letters written by Newton B. Drury and staff, incoming correspondence, interoffice memoranda, minutes of meetings, press releases, articles prepared for newspapers and magazines, speeches and statements, lists of speakers and speaking engagements, clippings, and reference materials, particularly relating to parks in other states.
► Collection Finding Aid

Of interest is substantive documentation of the San Francisco Bay Conservation and Development Commission (BCDC), including reports on a wide variety of bay issues, preparatory to the Commission's master plan. Also included are reports and other documents from the East Bay Regional Park District (EBRPD) and its Citizens' Task Force, focusing on land acquisition efforts.

The National Lawyers Guild (NLG) was founded in 1937 as an alternative to the conservative and racially segregated American Bar Association. In the 1990s, it helped defend environmental activists, and in 2005, founded the Environmental Justice Committee. This collection is minimally processed, but some anti-nuclear files are identified.
► Collection Finding Aid

This collection consists of administrative files and program records. Of interest is the subseries on natural resources that addresses local issues of air and water quality, environmental mitigation, land use, solid waste, and hazardous materials management.
► Collection Finding Aid

This collection consists primarily of files Matsui compiled during his career as a politician, the bulk from his work in the United States House of Representatives as Congressman for California's Sacramento district. Of interest are the files on environmental and water issues.
► Collection Finding Aid

Of interest in this small collection are the files on Pollution, California and the Atomic Energy Commission as well as those on water use.

This collection consists primarily of material Burton compiled during his career as a politician. Of interest are his files pertaining to the United States National Parks system kept during his service on the Committee on Interior and Insular Affairs during his tenure in the United States House of Representatives.
► Collection Finding Aid

This collection consists primarily of environmental reports, court proceedings, newspaper clippings, and correspondence accumulated by Pesonen during his time as an environmental activist, lawyer, and judge in the San Francisco Bay Area.
► Collection Finding Aid

This collection documents the work the Point Baker and Salmon Bay Protective Associations on environmental legislation in Alaska. Included are legal documents as well as legislation and lobbying materials.
► Collection Finding Aid

This collection contains material amassed during Mulford's time as California State Assemblyman for the 16th District and the 18th District (Oakland-Berkeley-Piedmont) from 1957 to 1970. Of interest are the Assembly and Senate Bill files which include environmental legislation.
► Collection Finding Aid

This small collection chronicles the fight for the establishment of Point Reyes National Seashore, and later lobbying to purchase additional land and limit development.

This collection documents Knox's career as a member of the California Assembly representing the 11th district, with files encompassing 1967-1980. Of interest are the Legislative Bill files and Subject files on various environmental, water, and energy issues.
► Collection Finding Aid

The best-documented issues are energy-related, including liquefied natural gas, nuclear energy, and the California Energy Commission. Water quality, hazardous substances, pesticides, and all terrain vehicles on public lands are subjects which can be found in the papers of the state directors, legislative representatives, and the subject files.
► Collection Finding Aid

This collection contain material relating to the passage of the California Wilderness Act (1984) and the Condor Range and Rivers Protection Act (1992).
► Collection Finding Aid

This small collection contains files created during Wheeler's time as Secretary for Resources for the State of California, including correspondence, memoranda, reports, and clippings. Major topics include water rights issues, urban sprawl and development, biodiversity, wetlands preservation, and other conservation matters.