Continuing a tradition that began with Hubert Howe Bancroft's own dictations, the Oral History Center (OHC) has interviewed individuals who were making environmental history in the West. These interviews on the protection of the environment and the management of natural resources are another major strength of Bancroft's environmental holdings. Since 1954, OHC has interviewed hundreds of individuals about grassroots environmental activism, environmental law and public policy, large membership-driven organizations, and parks and open spaces. Notable interviewees include David Brower of the Sierra Club and Friends of the Earth, photographer and conservationist Ansel Adams, Save the Bay founder Sylvia McLaughlin, and Horace Albright of the National Park Service. The OHC has extensive projects dedicated to the Sierra Club, Save the Bay, California water resources, the California Coastal Commission, the U.S. Forest Service, and more.

The Bancroft Library also holds many donated oral histories recorded by other agencies or individuals.  In addition, duplicate transcripts of interviews conducted by UCLA's Center for Oral History Research are part of the collection.

Agriculture and Natural Resources at University of California

This project documents the long history of the University of California as a land-grant university that has provided scientific assistance and technology for the Golden State's agricultural community and citizens. The OHC conducted interviews with retirees of the University of California's Division of Agriculture and Natural Resources, many of whom made positive contributions to the betterment of California agriculture and the environment and held valuable historic information necessary for future program development and policy decisions. The interviews illuminate the work and accomplishments of men and women who have professionally and personally influenced American agricultural science, technology, economics, farmer training, education, and labor relations for a sustainable agricultural economic future for California.

For nearly 50 years, the California Coastal Commission has worked with coastal communities to shape development along California's shore, efforts guided by the dual aims of environmental protection and public access. This project is capturing the history of this important agency through oral history interviews with former commissioners, staff, and community affiliates. These interviews will document nearly a half-century of coastal regulation in California, and in the process, shed new light on the many facets involved in environmental policy.

These interviews document state policy development as reflected in the legislative and executive branches of the state government and as reflected by others who played significant roles in the policy process of the State of California. Relevant interviewees include David E. Pesonen, David Kennedy, David Schuster, Doug Wheeler, Michael L. Fischer, and Rita Singer.

The East Bay Regional Park District (EBRPD) is a special regional district that stretches across both Alameda and Contra Costa Counties. Its core mission is to acquire, develop, and maintain diverse and interconnected parklands in order to provide the public with usable natural spaces and to preserve the region's natural and cultural resources. This project records and preserves the voices and experiences of formative, retired EBRPD field staff; individuals associated with land use of EBRPD parklands prior to district acquisition; and individuals who continue to use parklands for agriculture and ranching.

This project is a donated collection from the United States Forest Service Region 5 retirees' oral history committee. Key themes include forest careers, timber management, fire control, and public relations that have helped shape the region's and nation's Forest Service in the latter half of the twentieth-century.

This project focuses on California government and politics from 1966 through 1974. Relevant interviewees include Charles H. Warren, William R. Gianelli, and members of the San Francisco Bay Conservation and Development Commission.

Natural Resources, Land Use, and the Environment - Individual Interviews

Some highlights from this collection include interviews of Thomas J. Graff, California Regional Director for the Environmental Defense Fund; Ted Smith, activist for environmental justice in Silicon Valley; and Sylvia McLaughlin, cofounder of the Save San Francisco Bay Association.

Audiovisual media (phonodiscs, cassettes, CDs, VHS, and DVDs) of OHC interviews are restricted. However, bound copies of interview transcripts are available at The Bancroft Library and are discoverable through UC Library Search, UC Berkeley's online catalog. Many have been digitized, and if a PDF is available, a link will appear in the UC Library Search record. For recent interviews that have not been entered into the catalog yet, transcripts are available through the Oral History Center website. Please note that interview transcripts are lightly edited for accuracy and clarity, and reviewed by the interviewees, who may augment or correct their spoken words. 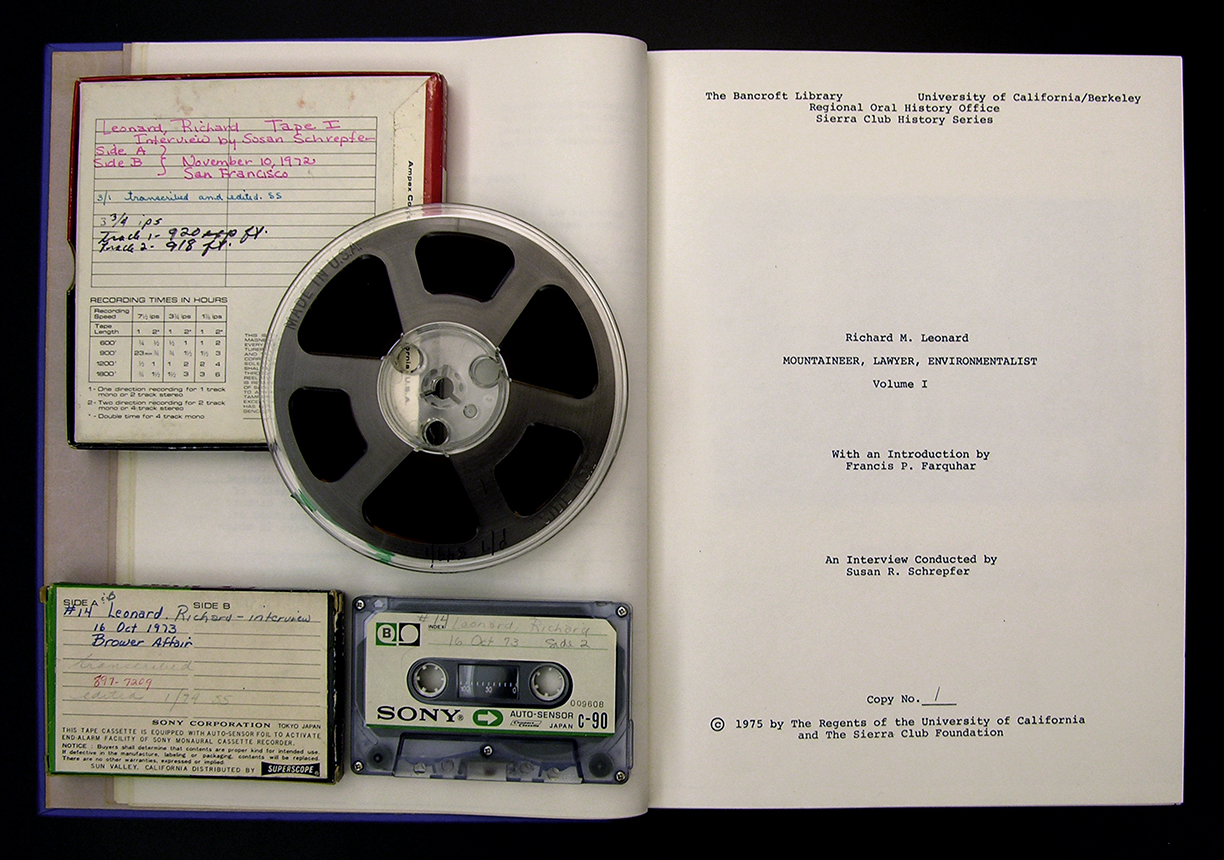 Select video excerpts of recent interviews are hosted on the Oral History Center's Youtube channel. Of particular interest is the playlist Natural Resources, Land Use, and The Environment.

The Oral History Center's podcasts are available on SoundCloud. Of interest are the albums Coastal Tales: The Long Struggle to Preserve California's Coast and Hidden Heroes (transcripts of Hidden Heroes available on the OHC website).