The Bancroft Library's anthropological collections include some of the richest source material on the languages of the Indigenous peoples of California. Containing extensive linguistic field notes, vocabulary schedules, ethnographic documents, and more, these collections play a vital role in indigenous language revitalization and reclamation efforts.  The bulk of this material comes from UC Berkeley's Department of Anthropology and the papers of notable anthologists who served on its faculty.  The Bancroft Library also collects papers of anthropologists who were based at other institutions, such as Margaret Langdon and Catherine Callaghan.

Please note: The Bancroft Library does not hold Native American human remains.  However, some collections do contain photographs where remains are visible.

Alfred L. Kroeber was at the forefront of the early emergence of anthropology as a field of study. Primarily interested in Californian Indians, he conducted extensive research on numerous native groups in the region. His field notes cover a wide variety of topics, including linguistics, phonetics, mythology, ethnogeography, music, material culture, ethnography, and kinship.

In 1901, Kroeber was offered a position in the new Department of Anthropology at UC Berkeley. By 1909, he headed both the department and the UC Museum of Anthropology at Parnassus Heights in San Francisco. He was promoted to full professor in 1919 and taught at Berkeley for 45 years until his retirement in 1946.

While Kroeber's contribution to the field of anthropology is immense, UC Berkeley acknowledges the controversial legacy of this man - his collecting of native remains, his unequal relationship with Ishi, and his erroneous but damaging pronouncement that the Ohlone people were culturally extinct. 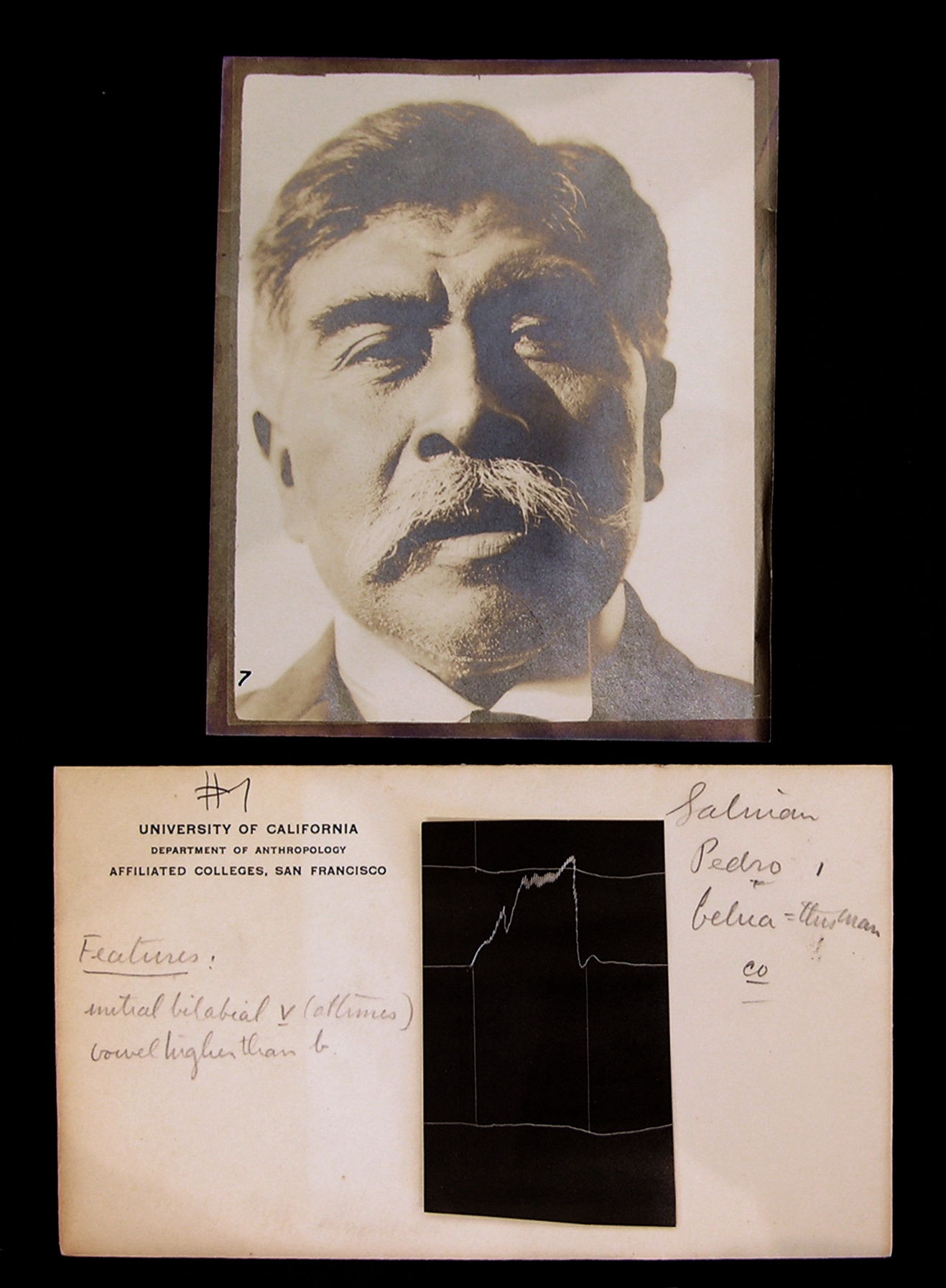 C. Hart Merriam started his career as a natural historian of the rural West, but later his primary research focus shifted to Native American cultures in California.  He was especially interested in documenting and preserving the Indigenous languages of the region, which were being lost through the death of older tribal members and the assimilation of surviving members into white culture.  Merriam did extensive field work, interviewing surviving tribal members and recording their language in printed vocabulary schedules, very carefully documenting names and locations of those with whom he worked.  His collection contains field notes, vocabulary schedules, manuscripts, typescripts, notebooks, clippings, printed matter, and photographs relating to those efforts with California Indians. 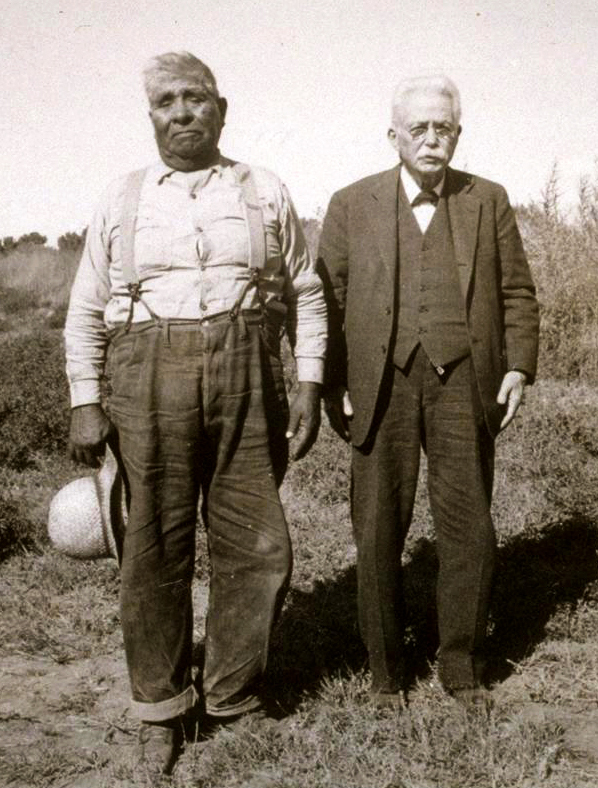 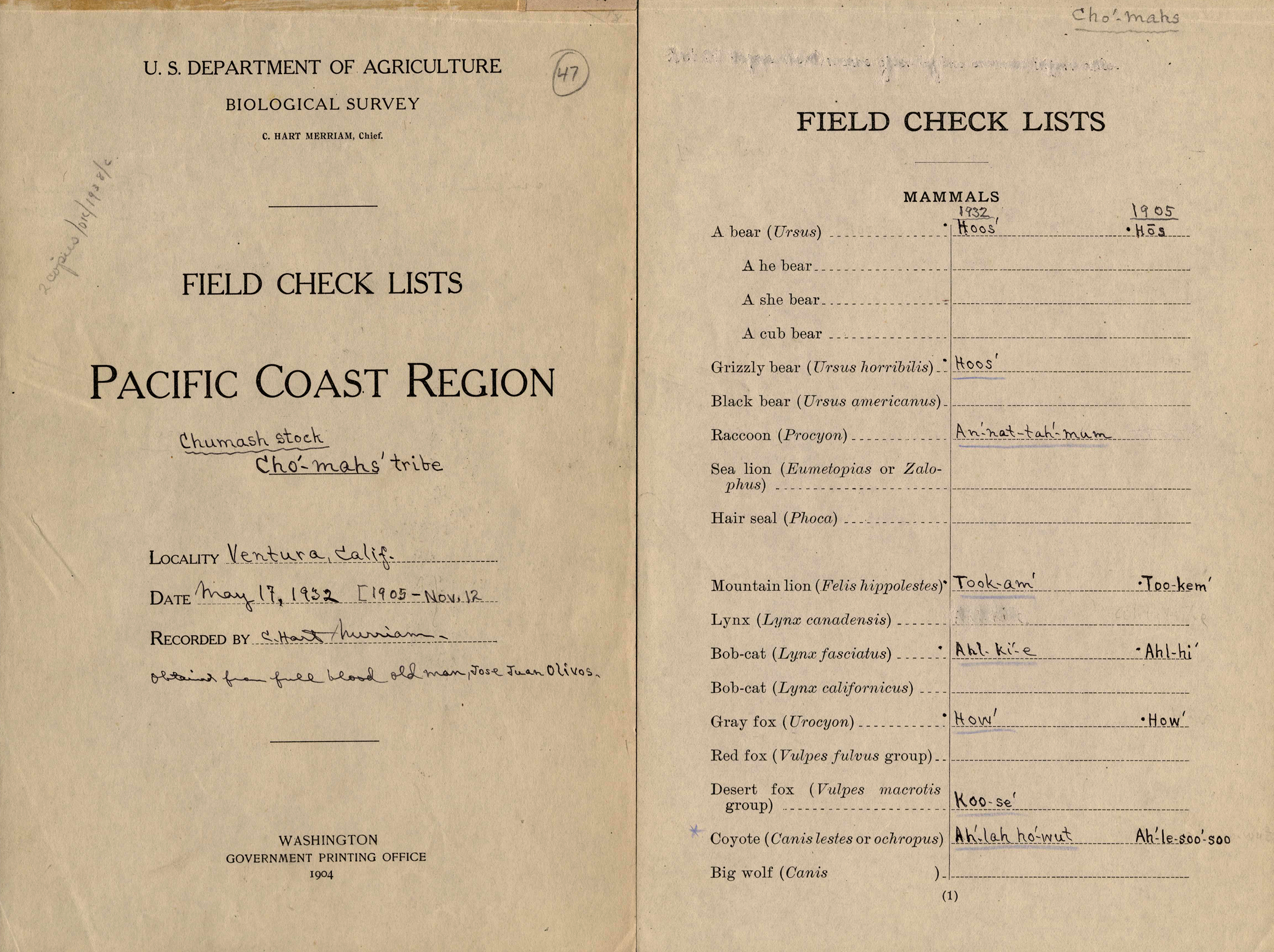 This eclectic collection is composed of a wide variety of materials, including manuscripts, field notes, and other linguistic, ethnographic, and ethnobotanical documents.  Specific formats include card files, newspaper clippings, genealogical tables, charts, maps, drawings, and photographs.  Some of the data were gathered by Berkeley anthropology graduate students for the Culture Element Distribution Survey, under the direction of Alfred L. Kroeber.  These documents also include more than 100 field notebooks containing interviews with Californian Indians that were conducted under the auspices of the United States Works Progress Administration and the California State Employment Relief Administration during the 1930s.  The collection also provides insight into the history of the Anthropology Department and of the development of ethnology in California. 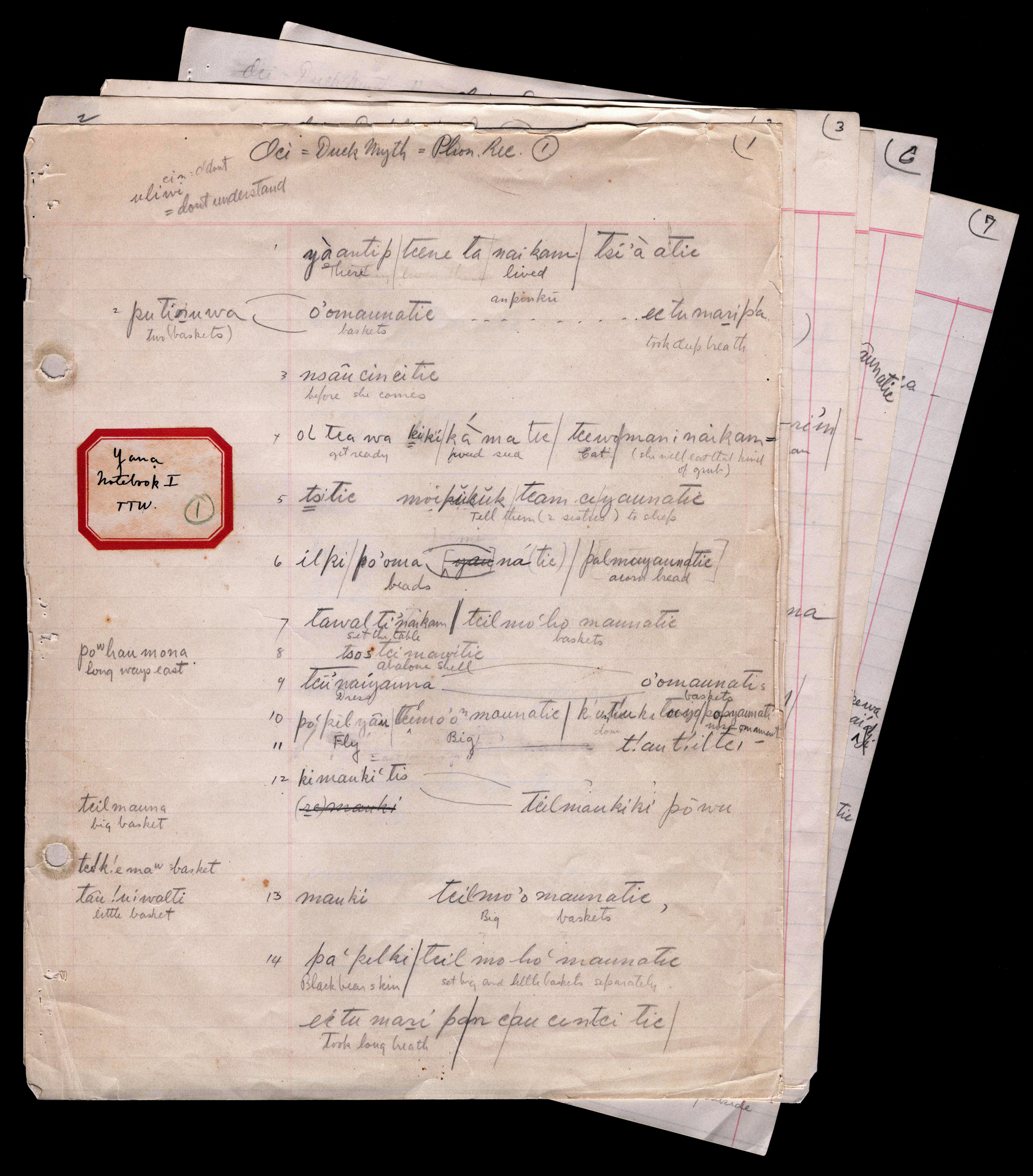 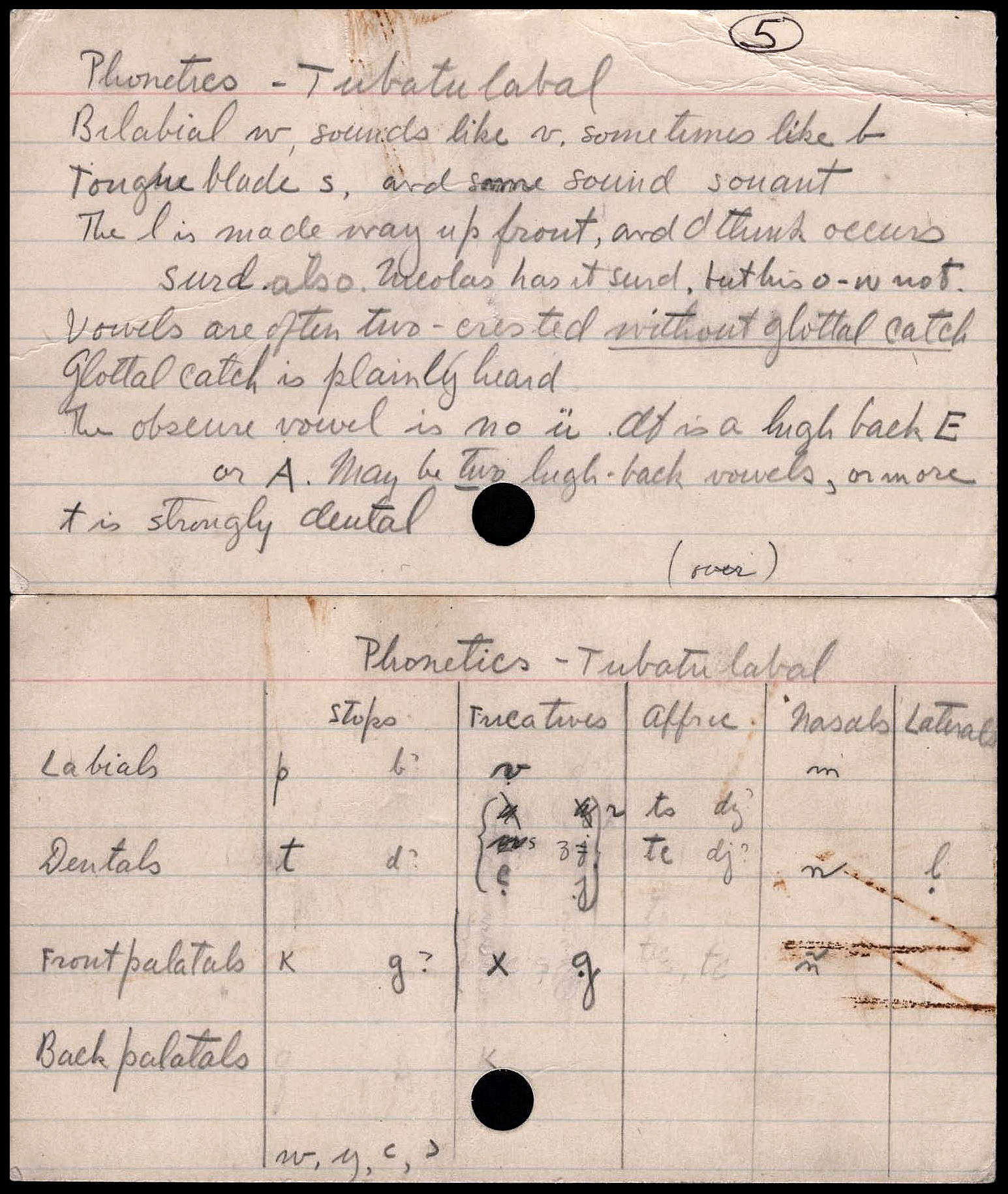 Margaret Langdon received her doctoral degree from UC Berkeley in 1966. For her dissertation, she did her fieldwork deciphering the spelling and grammar of Mesa Grande's Diegueño dialect in the San Diego area and worked with elders, Ted Couro and Christina Hutcheson, to create the first local Indian dictionary. During her years of teaching at the University of California at San Diego from 1965 to 1991, her contributions also included numerous publications on the native languages of Southern California and the Southwest. Langdon, professor emeritus of linguistics, was the primary expert in Kumeyaay, Northern Diegueño (Ipai) and Luiseño dialects. In addition, she was the leading figure in Hokan Studies and a founding member of the Society for the Study of Indigenous Languages of the Americas. 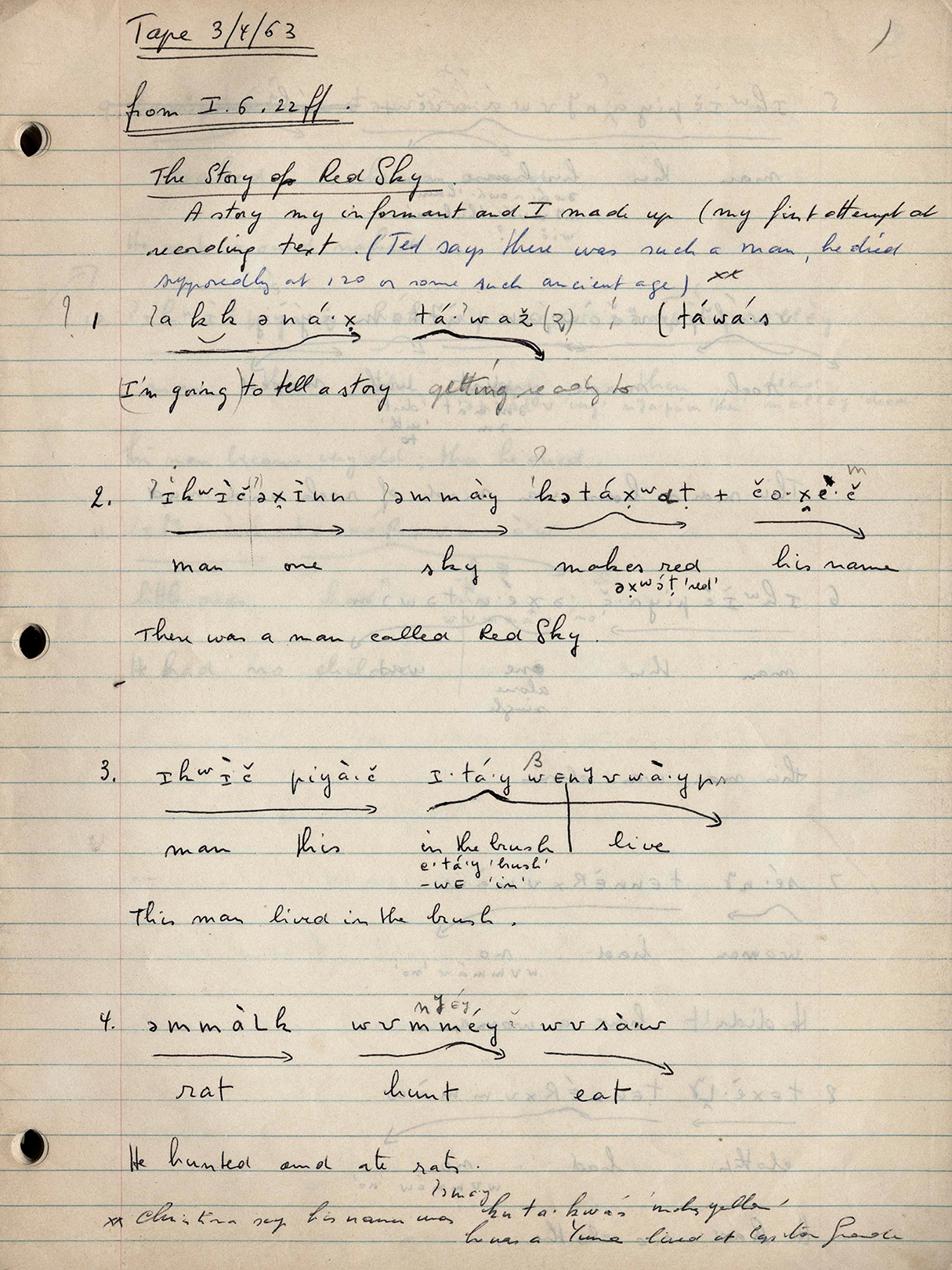 Catherine A. Callaghan received her B.A. in mathematics and her Ph.D. in linguistics from UC Berkeley in 1954 and 1963, respectively. She was appointed Assistant Professor of Linguistics at the Ohio State University in 1965 and remained there until her retirement. Her papers document her scholarship on Indigenous languages in California, the bulk consisting of dictionaries, grammars, vocabularies, field notes, research files and writings, and teaching materials. The Indigenous languages and dialects represented are Bodega and Marin Miwok (Coast Miwok), Chochenyo, Lake Miwok, Mutsun, Northern Sierra Miwok, Plains Miwok, and Rumsen. 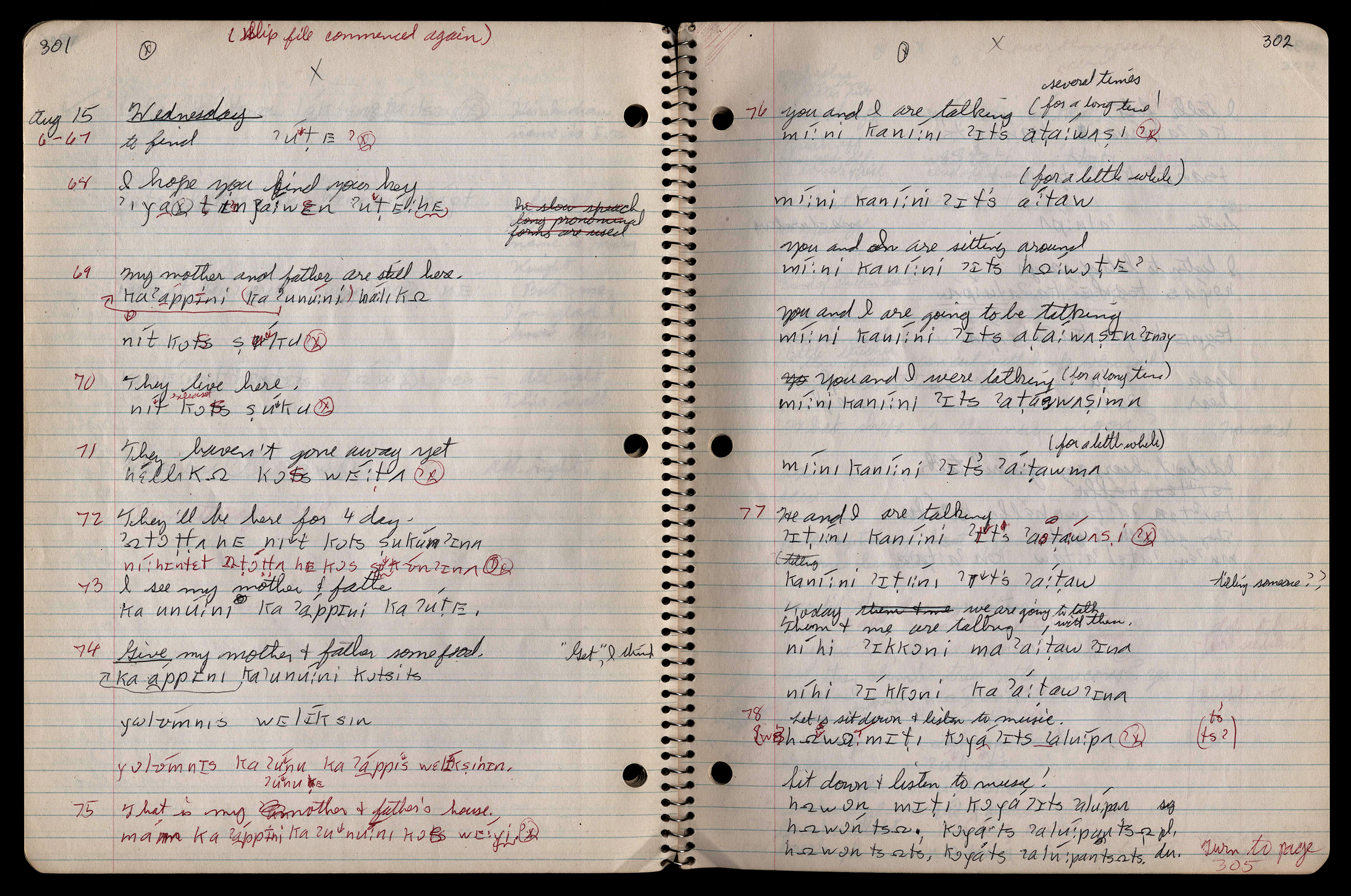 Notable contributors to this publication include A. L. Kroeber, S. A. Barrett, and Robert H. Lowie.

Records of the Department of Anthropology
CU-23

The bulk of this collection contains correspondence files maintained by the Department of Anthropology for the period of A. L. Kroeber's career. These files reflect the professional and research interests of the department. Included are material from individuals interested Indian groups in California as well as native informants.
► Collection Finding Aid

Ethnological documents of the Department and Museum of Anthropology, University of California, Berkeley
BANC FILM 2216 (microfilm use only, original documents restricted due to fragility)

The collection contains manuscripts, field notes, and other linguistic, ethnographic and ethnobotanical documents of Indian groups primarily of California and other western regions. Some of the data was gathered by Berkeley anthropology graduate students for the Culture Element Distribution Survey, under the direction of Alfred L. Kroeber.
► Collection Finding Aid

While this collection contains robust correspondence and publication files, of particular importance are Kroeber's field notebooks on Californian Indians. Kroeber took copious notes relating to linguistics, phonetics, mythology, ethnogeography, music, material culture, ethnography, and kinship, among many other topics. Among the best represented Indigenous groups are the Karok, Wiyot, Yurok, Yokuts, and Mohave of California, the Eskimo of Alaska, and the Zuni of New Mexico.
► Collection Finding Aid

This collection contains extensive field notes, writings, and records relating to the American Indian Film Project, dating primarily from the early and late years of Barrett's working life. Field notes date from 1896 and reflect Barrett's work with the Pomoan peoples, the Cayapa Indians of Ecuador, the Hopi, Kwakiutl, and Sierra Miwok Indians, as well as information about the Chippewa, Menominee, Piute, Washo, Wintun, and Yuki Indians.
► Collection Finding Aid in process

This collection contains Lowie's professional writings, correspondence and papers relating to his career as professor of Anthropology at UC Berkeley, and field notes of his work on Indians and Indian linguistics.
► Collection Finding Aid

For researching linguistic material of Indigenous communities of present-day California, the best place to start is by visiting the Indigenous Peoples of California: Related Resources at The Bancroft Library LibGuide.  Please note that the material is organized by language family, not by tribe or geographic location.  Information on language families was retrieved from the Survey of California and Other Indian Languages, a research center in the Department of Linguistics at UC Berkeley, and the Handbook of North American Indians, published by the Smithsonian Institution.

To find anthropological collections, the following sample searches in the Advanced Search module are a place to start.

Searching for specific dictionaries and the like using tribal or language names may bring back skewed results as many have evolved over time.  Spelling and terminology in UC Library Search records may be inconsistent with current practices.  If focusing on California, a helpful resource is California Indian Languages by Victor Golla.  To get a sense of how publications on Indigenous languages are represented in UC Library Search, try experimenting with the following sample searches, utilizing the Any field search filter lines in the Advanced Search module.

indian* AND dictionar* AND language*
indian* AND grammar
indian* AND vocabular*
indian* AND linguistic*
Note: substituting the search term "native american" in place of indian* will bring back far less results, but will include items not present in the sample searches.

As in UC Library Search, spelling and terminology of tribal and language names may be inconsistent with current practices.  Use of geographic place names and names of individuals in keyword searching may yield better results than in UC Library Search.  Be sure to utilize both search capabilities of The Bancroft Library OAC page and the University Archives OAC page (University Archives is part of The Bancroft collections, but is categorized separately in OAC).