The Bancroft Library has considerable holdings of rare books and manuscripts.  Of particular interest are early editions of travel narratives on the discovery of the Americas and European interactions with the Indigenous populations.  There are also early Mexican ecclesiastical texts and colonial American works, some in Indigenous languages.  Visually powerful are a handful of lavishly illustrated plate books depicting early impressions of native peoples.

Richly illustrated with copper-plate engravings, Great American Voyages was compiled and engraved by Theodor de Bry.  This nine-volume set of travel narratives presents a broad view of European conquests in America and the first contact with its Indigenous population.  The first volume was issued in 1590 in Latin and proved to be so popular that it was quickly translated into English, French, and German.  De Bry died after the publication of the sixth volume in 1598, leaving his sons and widow to continue the work of the last three volumes.

Theodore de Bry's engravings provided many Europeans with their first glimpse of the New World and greatly influenced their perception of the Indigenous population as being both noble and savage.  As de Bry had never traveled to the New World, his engravings were were based on textual descriptions of adventurers, life drawings by artist-explorers who had been to the continent, and the then tendency of depicting Indigenous peoples with classical Greco-Roman bodies, leading to an inaccurate and somewhat glorified conception of the native population. 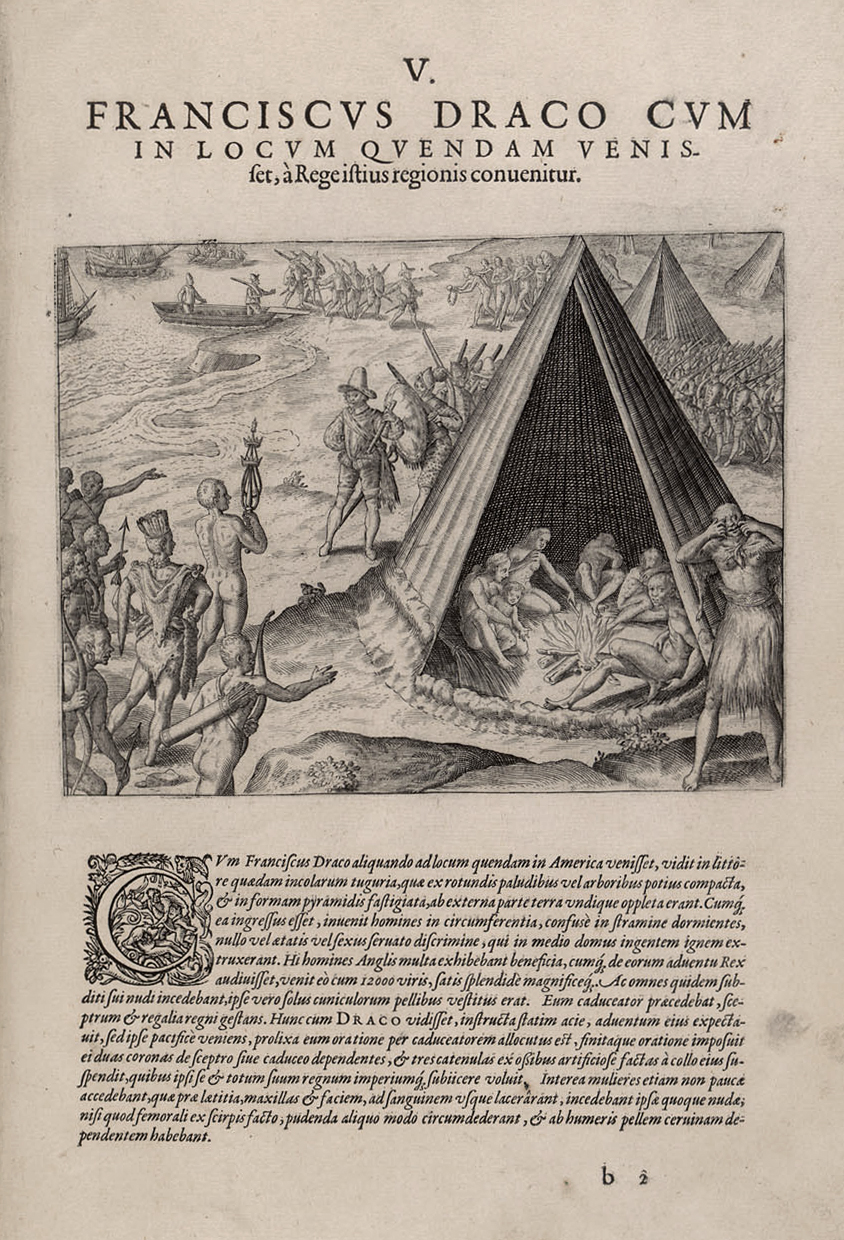 The Aboriginal Portfolio is the first plate book depicting Native Americans, containing a series of seventy-two hand-colored lithographic portraits of tribal chiefs, published in ten monthly installments between 1835 and 1836.

James Otto Lewis, an artist employed by the Bureau of Indian Affairs, sketched the chiefs from life while on location for various treaty councils, later finishing the portraits in his studio in Detroit, Michigan.  The original watercolors were destroyed in the Smithsonian Institution fire of 1865.  Lewis's artwork is noted for his attention to authentic details and is a departure from the fantasies, cliches, conventions, and sensationalism that characterized earlier portrayals of Native Americans. 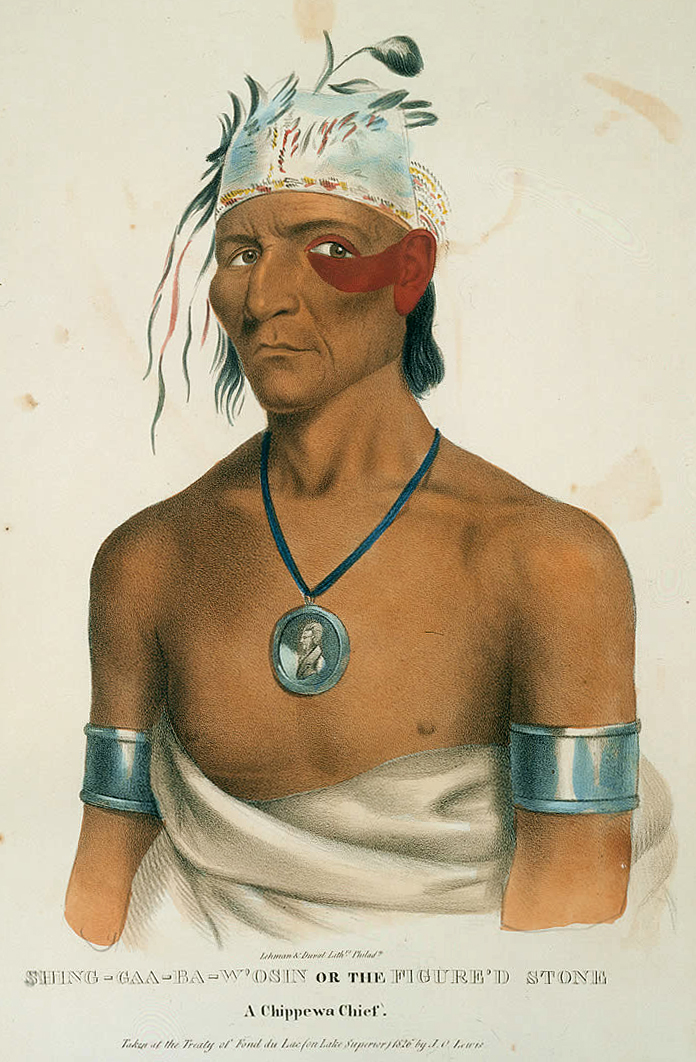 Shing Gaa Ba W'osin or The Figure'd Stone: A Chippewa Chief
Image citation: The aboriginal port folio, or, A collection of portraits of the most celebrated chiefs of the North American Indians, ff E89 .L488 1836, The Bancroft Library, University of California, Berkeley

In 1832, Prince Alexander Philipp Maximilian of Wied, a German explorer and naturalist, traveled to the western territories of the United States.  He hired Karl Bodmer, a Swiss painter, to visually record his expedition.  Upon his return to Europe, Prince Maximilian published his journals from this period.  Of the many watercolors and sketches Bodmer had produced during the expedition, eighty-one were incorporated as aquatints in the picture atlas that accompanied the published journals.

Many of the region's Indigenous tribes encountered during the expedition were documented and illustrated.  Bodmer's images are considered to be the first accurate portrayal of the Plains Indians in their homelands. 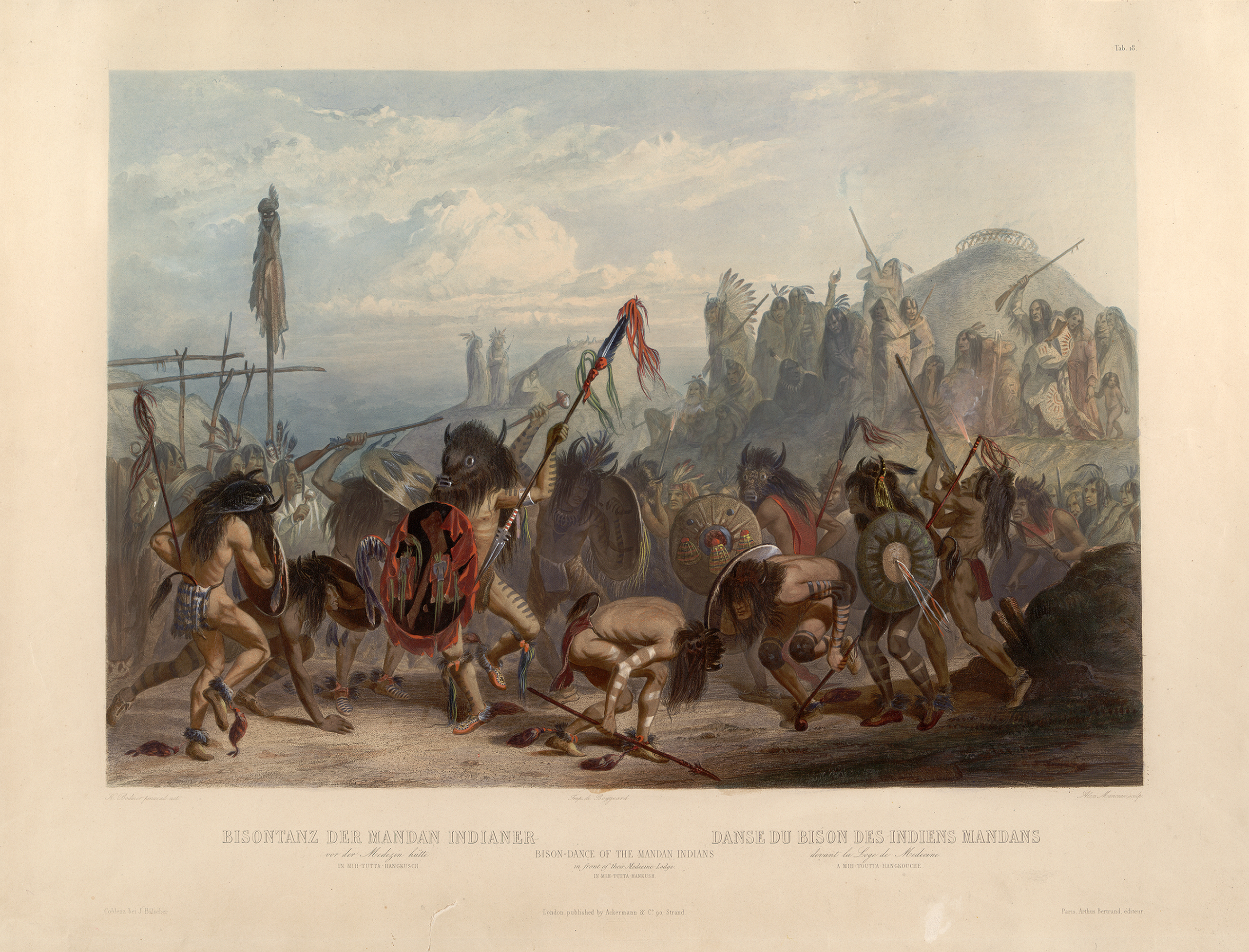 The first Bible printed in the New World, commonly known as the Algonquian Bible, was the culmination of fourteen years of work by John Eliot, an English Protestant who immigrated to Massachusetts and devoted his life to evangelizing Native Americans.  With help of Indigenous speakers, he translated the Bible into Massachusett, part of the Algonquian language family — a formidable task since it was an unwritten language and had to be rendered phonetically into the Roman alphabet.  Fewer than forty copies survive of the 1663 first edition, and approximately fifty-three copies survive of the revised and corrected 1685 second edition.

While this work was used as a vehicle of forced cultural assimilation, it has gained some redemption in recent years, becoming the keystone in reviving the Wampanoag language, a close relative of Massachusett that had no native speakers for six generations.  This journey is chronicled at the Wôpanâak Language Reclamation Project website. 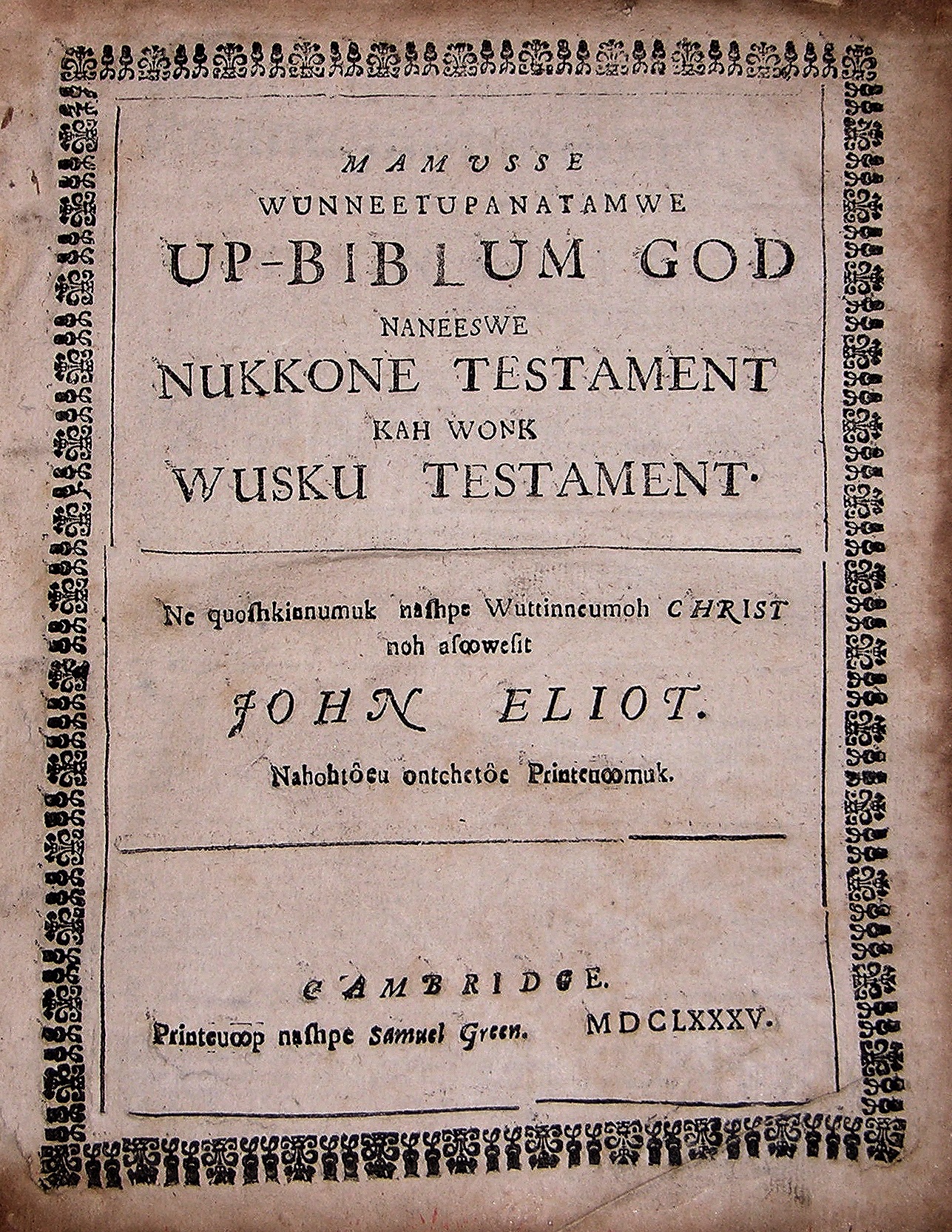 History of the Indian Tribes of North America

Published between 1837 and 1844, the three-volume History of the Indian Tribes of North America was compiled by Thomas Loraine McKenney who served as the head of the United States Bureau of Indian Affairs between 1816 and 1830.  Accompanied by biographies written by James Hall, it contains 120 hand-colored lithographs, many the only known likeness of Native American leaders of the early nineteenth century.

The majority of the portraits were commissioned from Charles Bird King, whose work formed the basis of the National Indian Portrait Gallery, first housed in the offices of the War Department before being transferred to the Smithsonian Institution.  Except for a small handful, his original oil paintings were destroyed in the fire of 1865.  Various other artists, including James Otto Lewis, Henry Inman, and George Cooke, also contributed portraits to the History of the Indian Tribes of North America. 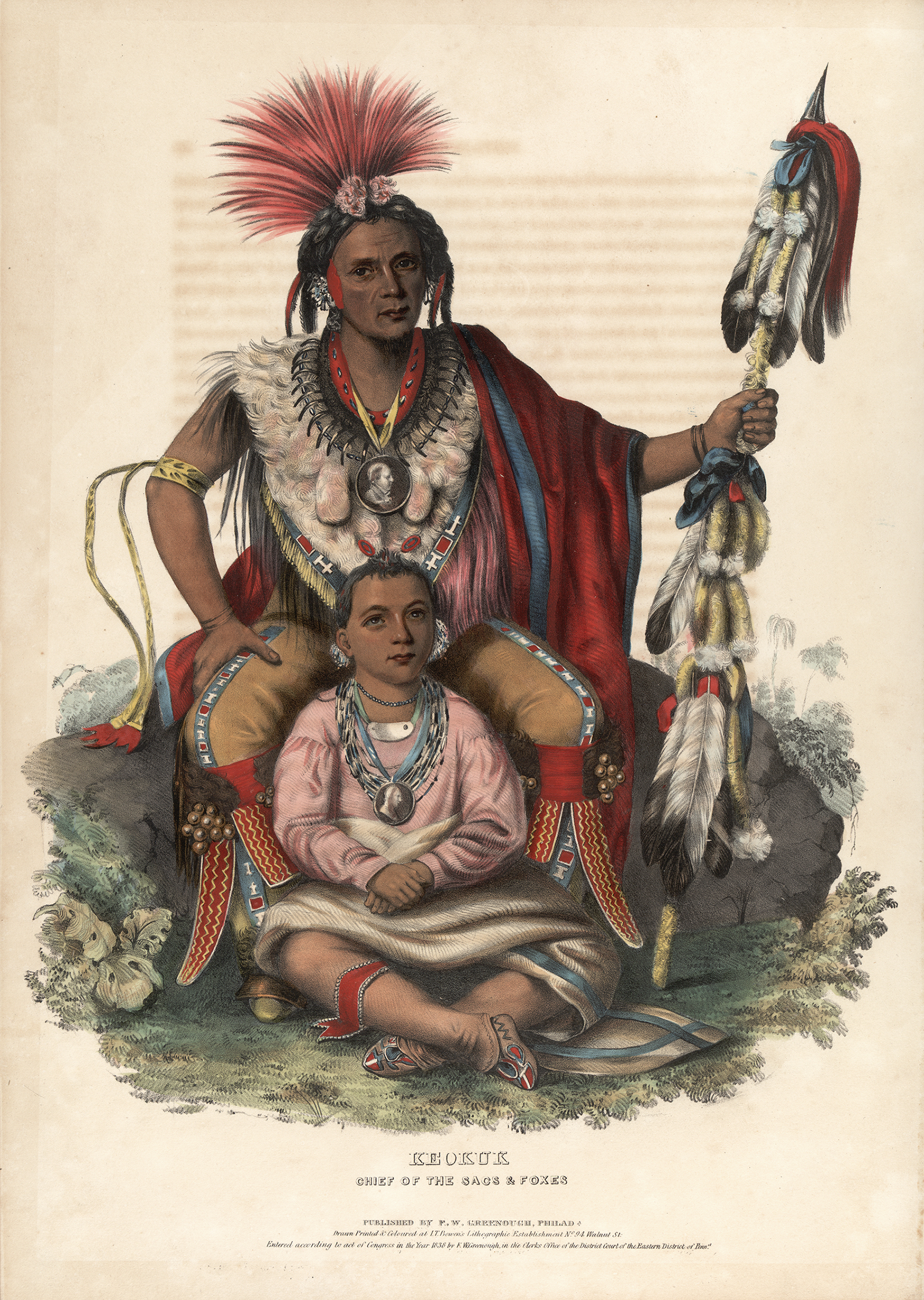 Keokuk, Chief of the Sacs & Foxes
Image citation: History of the Indian tribes of North America, with biographical sketches and anecdotes of the principal chiefs, xff E77 .M13 v.2, The Bancroft Library, University of California, Berkeley

Artist George Catlin traveled across the Great Plains between 1830 and 1836, illustrating the various tribes he encountered.  The end result was more than 500 oil paintings chronicling Indian life and culture.  He presented his paintings to Congress in 1838 with a goal of selling the collection as the core of a national museum but was rejected.  To recoup financial losses, he had a number of his paintings made into prints, published in 1844 in the North American Indian Portfolio.  The original oil paintings are now part of the Smithsonian American Art Museum's collection.

Catlin was one of the first artists to illustrate the tribes of the Great Plains so extensively in their own territories.  He also stirred controversy for his championing of the Native American cause, criticizing the government's treatment of them. 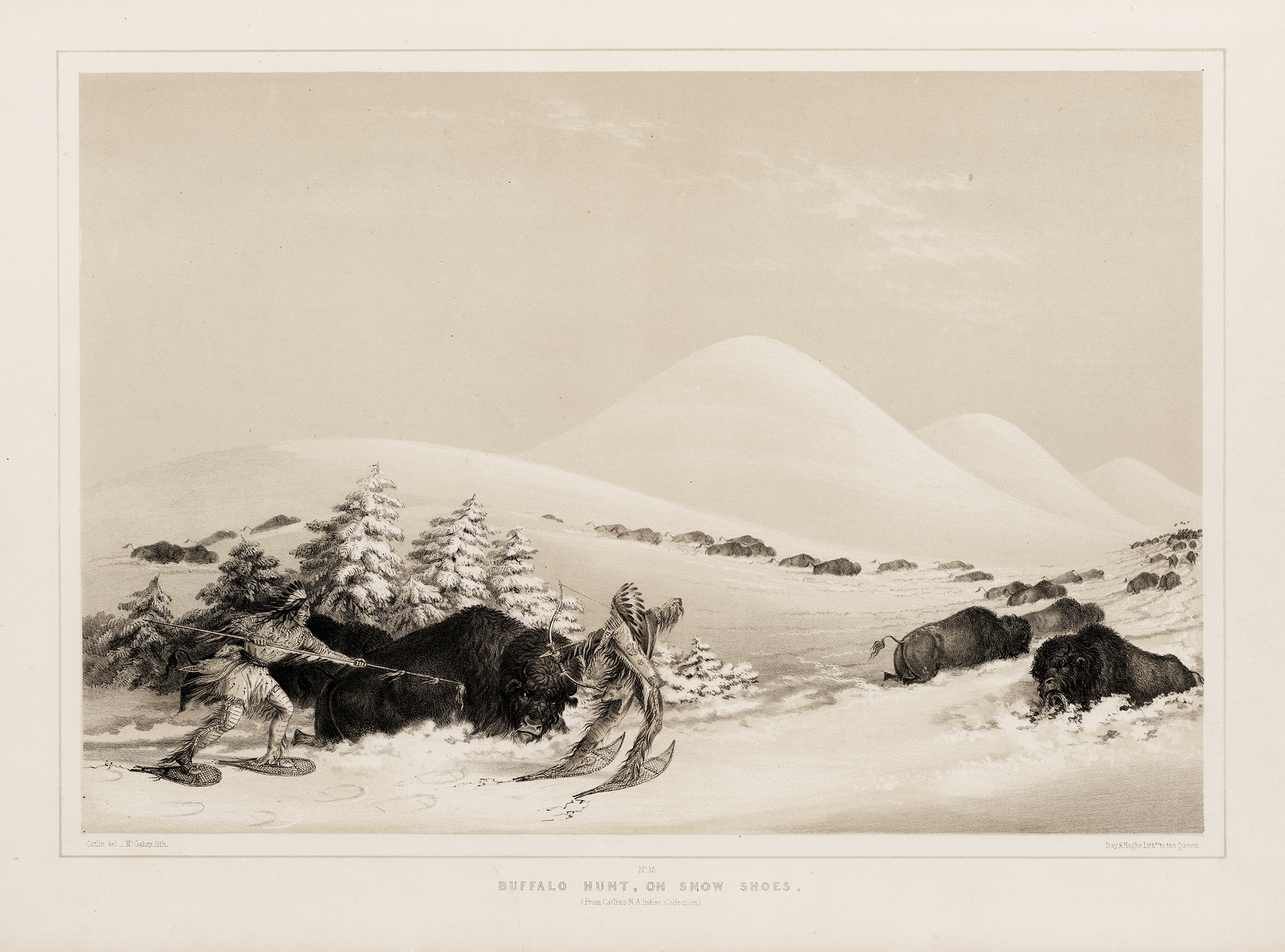