The Bancroft Library has visual imagery of Native Americans in a wide variety of formats, including framed watercolor and oil paintings, early photographs from anthropological documentation and government surveys, 21st-century photographs from documentary and cultural reclamation projects, and Indigenous community posters.  In addition to significant stand-alone collections of Indigenous images, this sort of material is also scattered through the archives of individual photographers and collectors.

In 1867, the U.S. Congress authorized western explorations that focused on geology and natural resources in the lands gained by the Louisiana Purchase in 1803 and the Mexican–American War in 1848.  This resulted in the four great surveys of the West: King (1867), Powell (1869), Hayden (1871), and Wheeler (1872).  These surveys were conducted under the auspices of the Corps of Engineers, the Department of the Interior, and the War Department.  In addition to cataloging natural resources and mapping the new territories, these surveys also recorded the location and population of Indian tribes.  The expeditions were extensively visually documented by pioneer photographers such as T. H. O’Sullivan and John K. Hillers, and many images of the Indigenous populations in these territories were captured.

Small-scale surveys, such as those conducted by railroads, also contain photographs of the Indigenous populations. 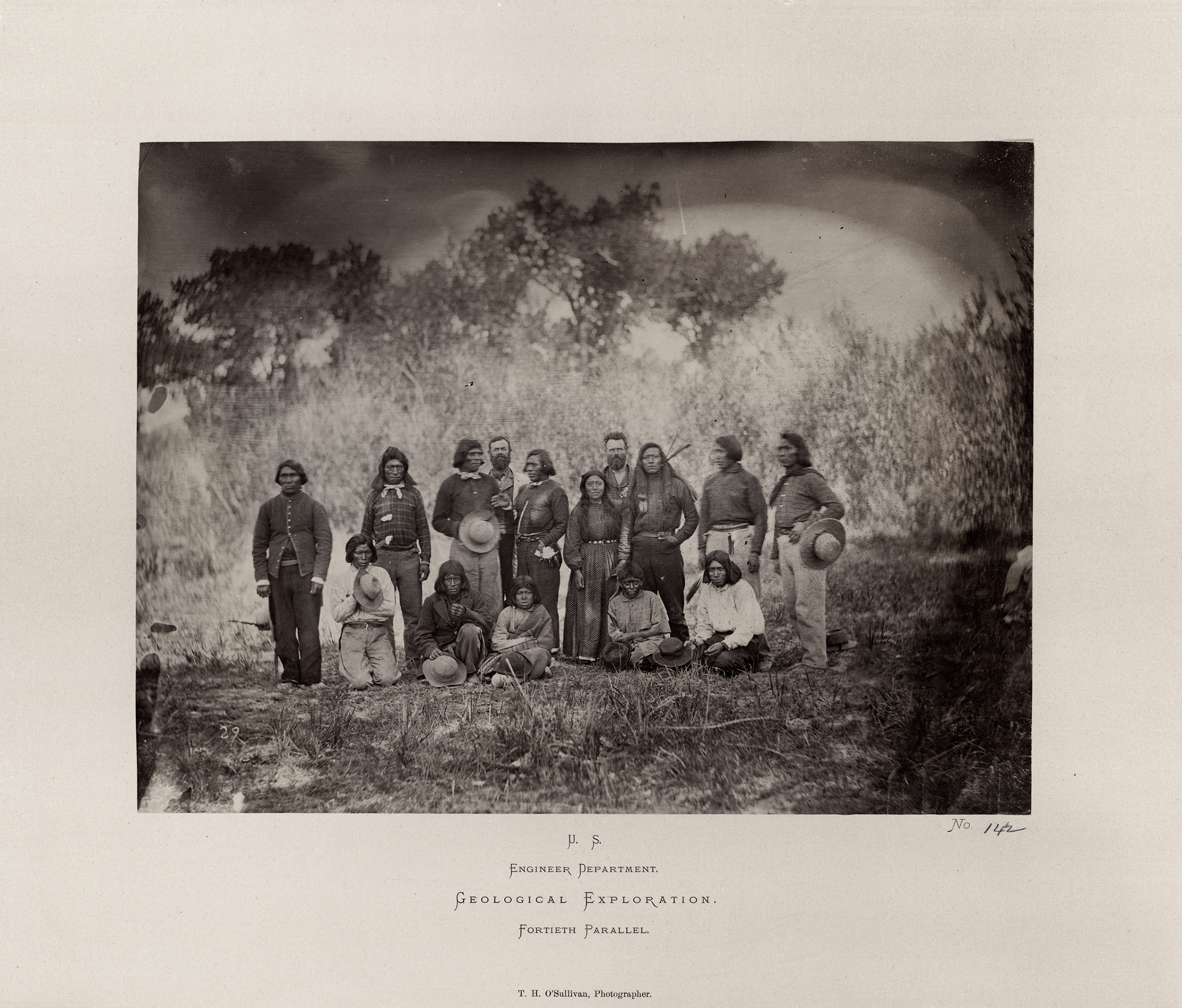 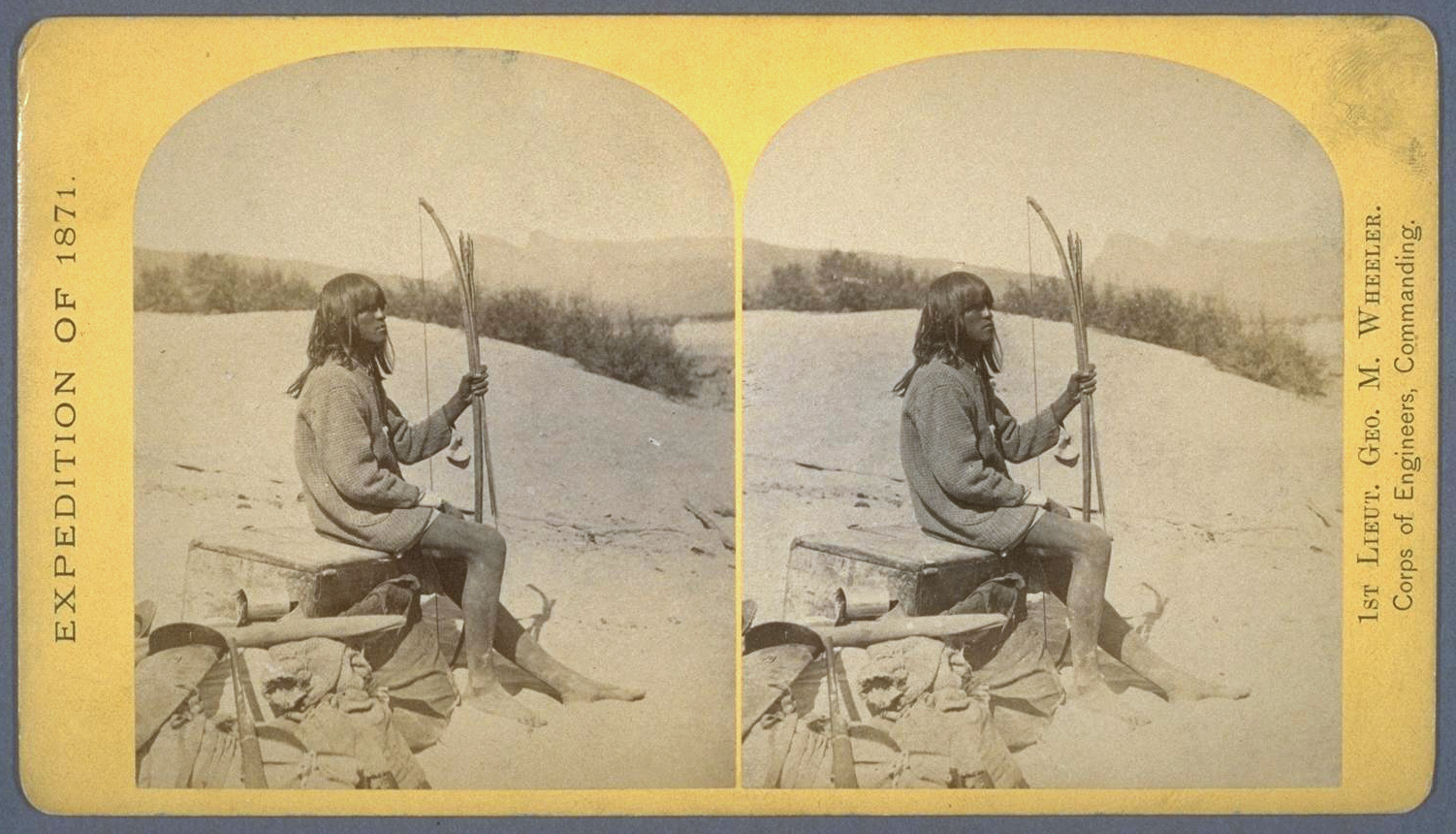 Maiman, a Mojave Indian, guide and interpreter during a portion of the season in the Colorado country
Image citation: Western Survey Expedition of 1871, BANC PIC 1905.17117:16--STER, The Bancroft Library, University of California, Berkeley

The Robert B. Honeyman Jr. Collection of Early Californian and Western American Pictorial Material is composed of more than 2300 items, focused on pictorial interpretations of the Old West.  Formats and media within this collection range from original oil paintings (such as the image depicted below) to engraved souvenir spoons.  Scattered throughout are various portrayals of Native Americans, including what is considered one of the earliest depictions of Mission Indians (BANC PIC 1963.002:1023--FR) and of San Francisco (BANC PIC 1963.002:1021--FR). 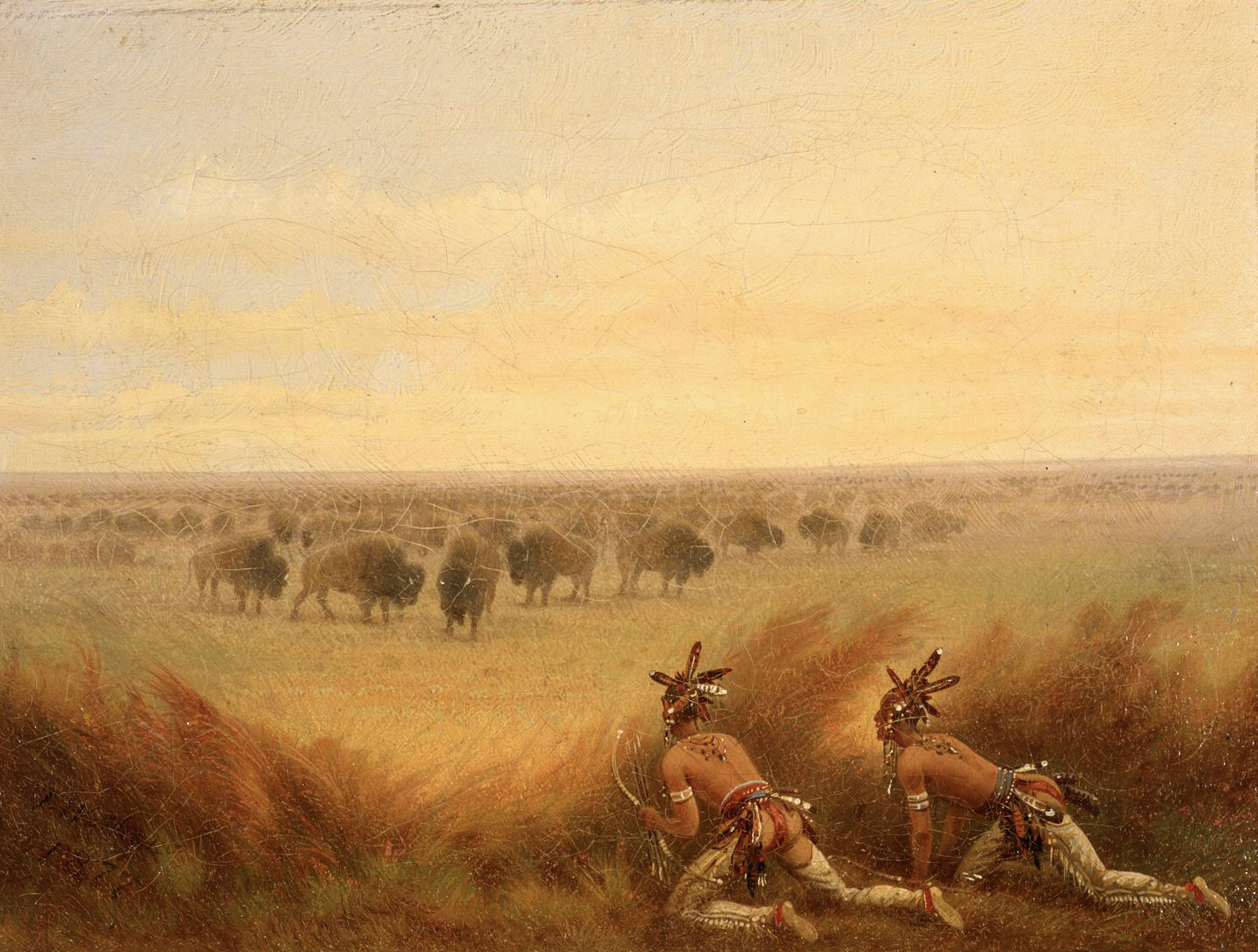 In documenting the languages of Californian Indian tribes, C. Hart Merriam also took copious photographs, mostly of the people and places he encountered in his field work.  The images depict individuals, dwellings, artifacts, and related geographic regions.  Some Alaskan and other North American Indian images are also present in his collection.

Other photographic collections by anthropologists include those of Samuel Alfred Barrett and Mary Jean Kennedy. 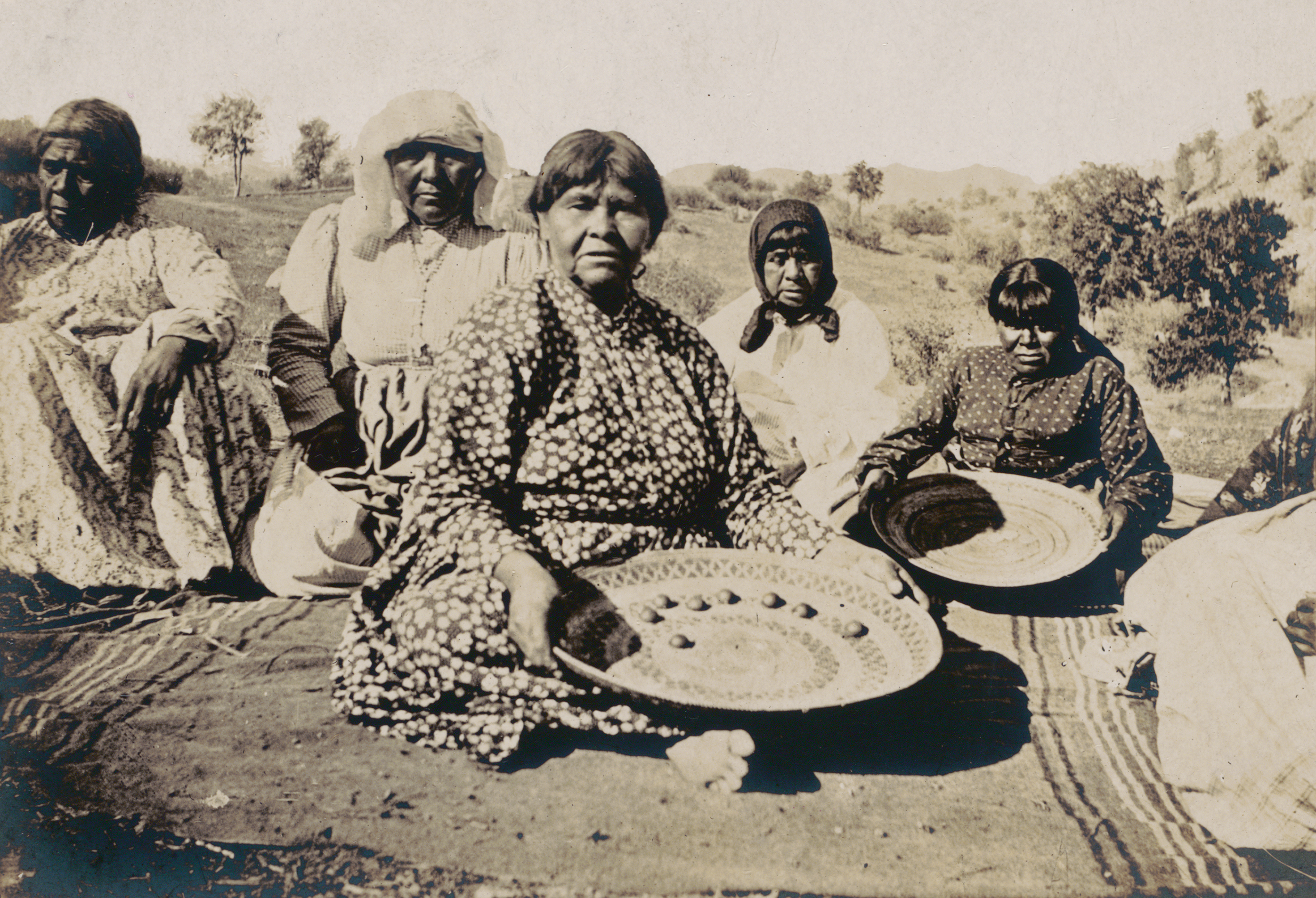 Between 1900 and 1930, the photographer Edward Curtis took more than 40,000 negatives in his attempt to document Native American cultures, capturing multitudinous features of Indian life and the surrounding environment.  He printed select images as photogravures in a publication that spanned twenty volumes and twenty oversized portfolios between the years 1907 and 1930.  The images are accompanied by narrative text describing the customs of eighty tribes, based on the ethnography conducted by Curtis and his assistants in the field. 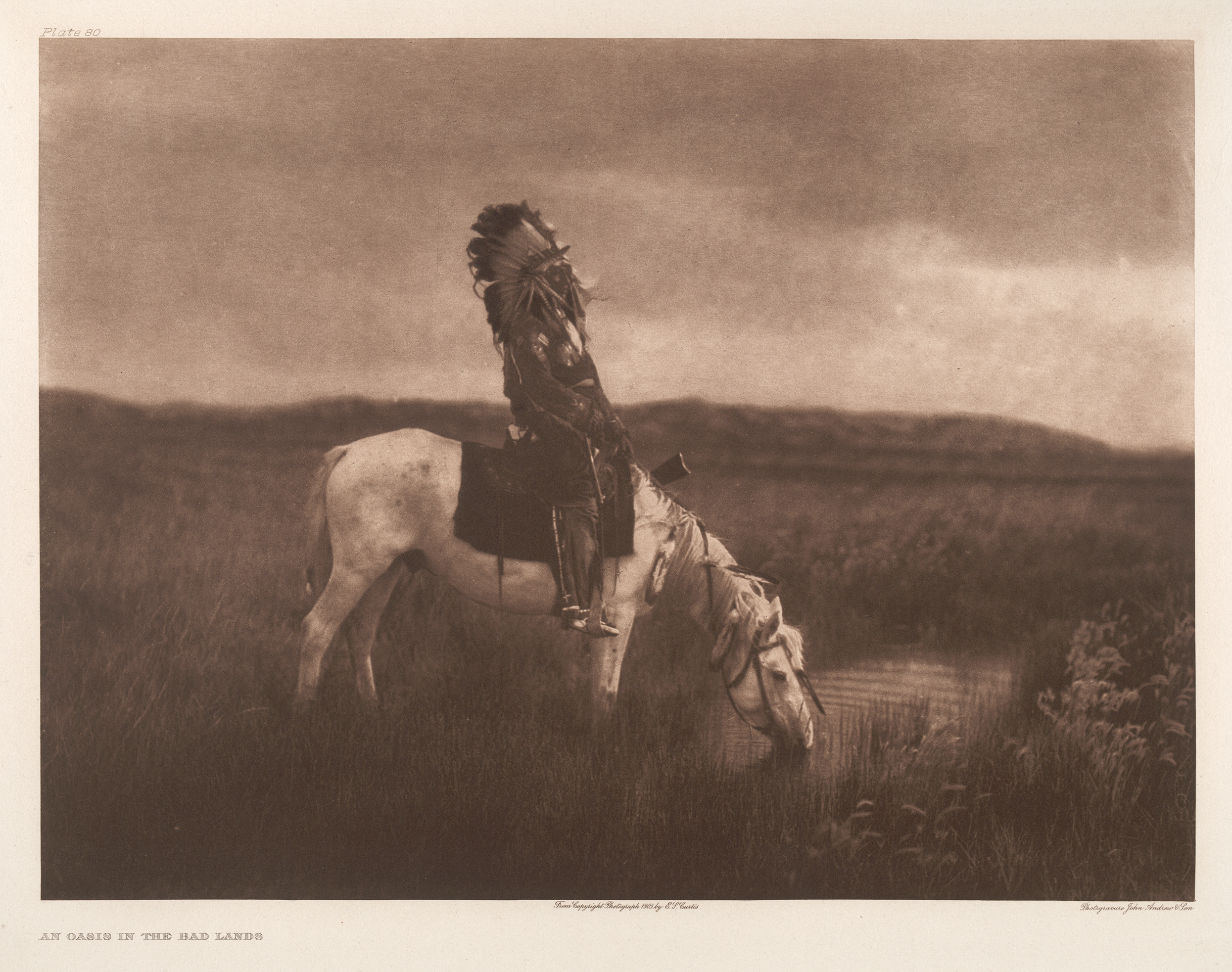 Michelle Vignes, a documentary photographer and photojournalist, visually captured the American Indian Movement from the 1960s through the 1990s. Two particularly notable subject areas are the 18-month occupation of Alcatraz Island (1969-1971) and the Siege of Wounded Knee (1973). Other images depict subjects ranging from pueblos and reservations of the Southwest to the Pine Ridge Reservation of South Dakota, as well as many other parts of North America. Well-represented California subjects include D-Q University, the Native American Health Clinic in San Francisco and Oakland, and Northern California Indian casinos of the 1990s. 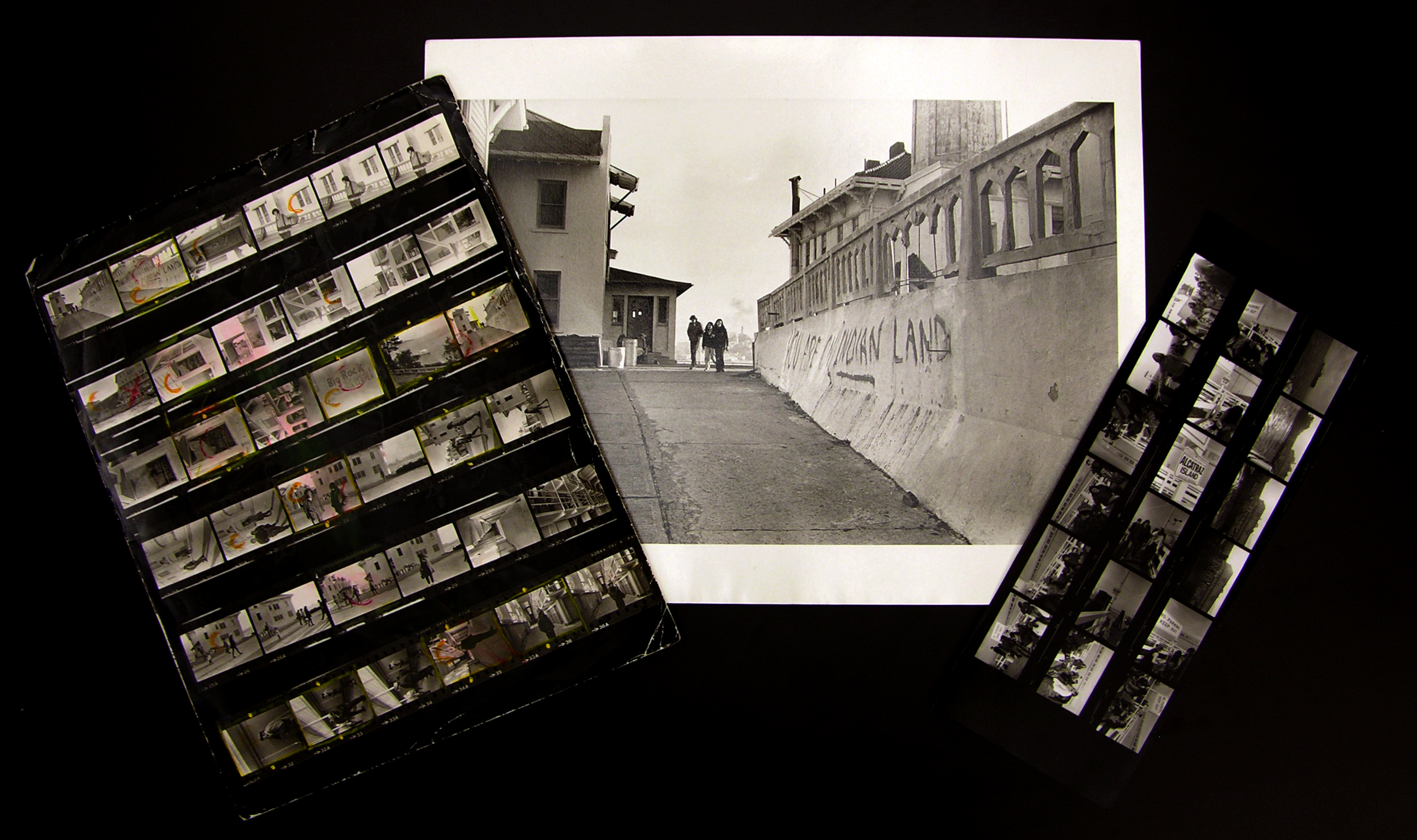 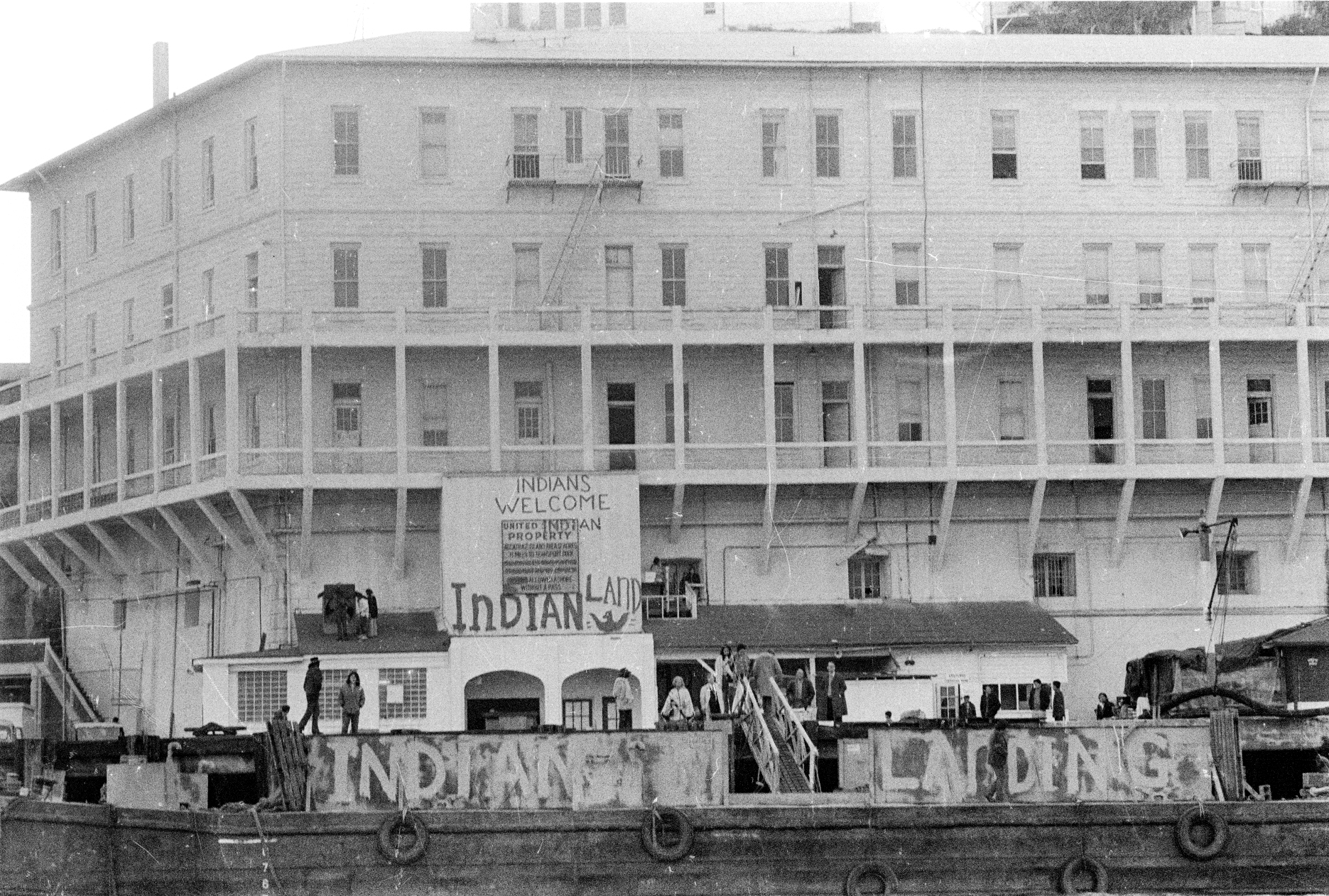 The Intertribal Friendship House (IFH), founded in 1955, is one of the oldest and still operating "urban Indian centers" in the United States.  Its founding was in direct response to the Termination Act, the Relocation Act, and the Employment Opportunity Act, passed by the Federal Bureau of Indian Affairs during the 1950s.  When combined, these acts called for the removal of American Indians living near or on reservations and their relocation to urban areas.

In 1976, the Community History Project, an IFH program, emerged to preserve the history of the broader San Francisco Bay Area "urban Indian" community.  While the initial goal of the project was to record oral histories of community members, its focus expanded to include local activities, events, and organizations.  This broadened interest is reflected in a collection of posters and other graphic material that promotes various events and other themes pertaining to Native American culture, history, and politics. 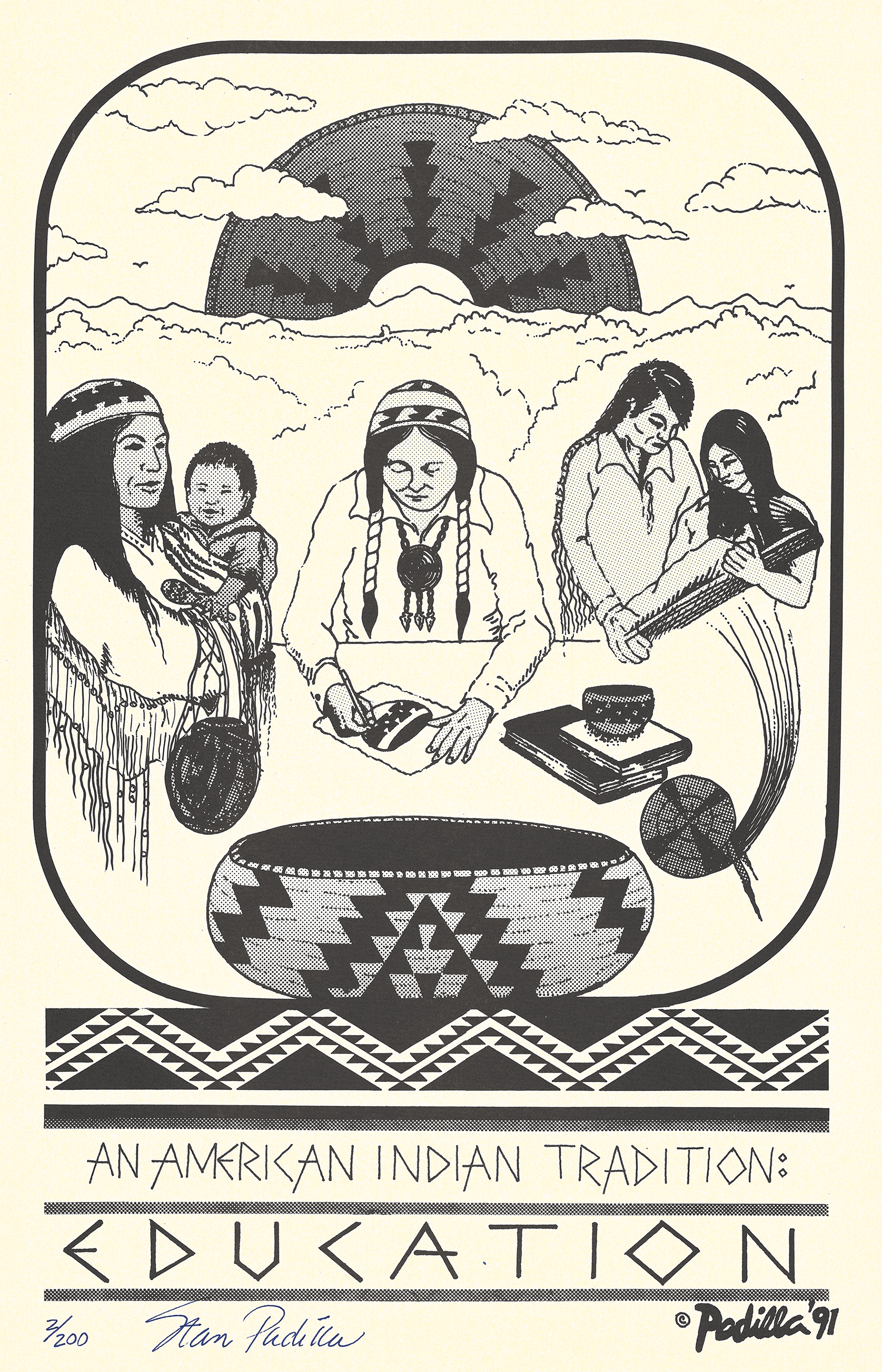 In 2006, San Francisco-based photographer Ira Nowinski embarked on an extensive six-year photographic survey of contemporary California Native American groups, emphasizing festivals and other gatherings that demonstrated the preservation of traditional cultures, their revival, or both, throughout the state.  By the end of the project, a collection of more than 4,770 photographic prints and 30,000 digital files had been amassed. 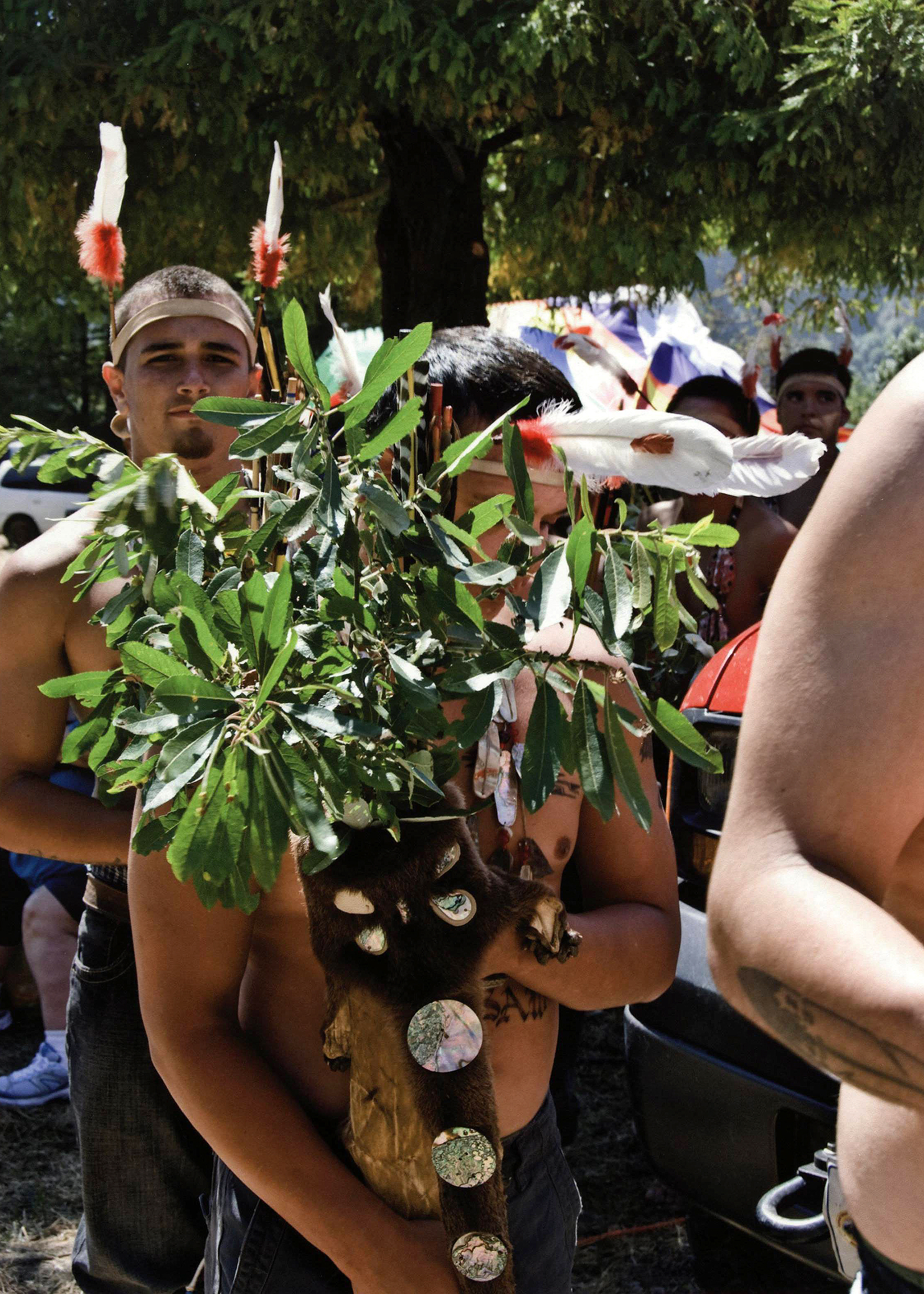 William Ashburner collection of photographs from the Geological Exploration of the Fortieth Parallel
BANC PIC 1957.027--PIC (viewing print use only, original documents restricted due to fragility, many images available online)

This collection is a set of 144 large format photographic prints taken on the Clarence King surveys of 1867 to 1869. The set is focused on the western portion of the King Survey and includes locations in California, Nevada, Utah, Idaho, and Wyoming. Images of Native Americans in this region is included.
► Collection Finding Aid (contains digital images)

Stereoviews of Indians and the Colorado River from the J.W. Powell survey
BANC PIC 1980.082--STER

This collection contains 107 stereographic prints taken during John Wesley Powell's exploration of the Colorado River, conducted under the auspices of the Secretary of the Smithsonian Institution from 1869 to 1872.  The photographers include John K. Hilliers, E. O. Beaman, and James Fenmore. The collection has of scenes in the Colorado Valley, including views of the Colorado River and the Native American inhabitants of this region and their dwellings.
► Collection Finding Aid (contains digital images)

This collection contains 150 albumen stereographs taken of and for the Geographical Surveys West of the 100th Meridian from 1871 to 1874. Timothy H. O'Sullivan and William Bell were the official photographers of the surveys. Included are images of Zuni, Navajo, Apache, and Ute Indians.
► Collection Finding Aid (contains digital images)

The American Indian Movement and other Native American files (PIC boxes 16-21) contain photographs of the occupation of Alcatraz, the siege at Wounded Knee, urban Indian health clinics, D-Q University, various pow wows, Indian casinos, and leaders and activists such as Dennis Banks.  Also documented are numerous Native American women, including artists and craftswomen and storytellers of the Southwest.

This collection is an extensive survey of contemporary California Native American groups with emphasis on festivals and other gatherings which demonstrate the preservation and revival of traditional cultures.  Photographs document tribal ceremonies, traditional regalia, baskets and other examples of material culture, ceremonial structures, regional environments, and other subjects.  The collection also has many individual and group portraits.  In addition, Nowinski's research files for the project are included.
► Collection Finding Aid

This collection contains posters collected by the Data Center of Oakland, Calif. While the bulk relates to the politics of Central America, over 30 posters depict the North American Indian Movement in addition to Indigenous political issues, human rights, and racism.
► Collection Finding Aid

This extensive collection contains approximately 850,000 local news photographs taken by staff of the San Francisco Examiner, the majority of which were never printed in the paper.  The American Indian Movement in the Bay Area is particularly well-documented.
► Collection Finding Aid

In the Advanced Search module, searches can be limited to pictorial material by selecting Images in the Material Type section on the right side.

When searching collections in OAC, the

icon indicates that digital images are available for viewing online.

Calisphere is the repository for digital images from The Bancroft Library.  While these images are also accessible via the Online Archive of California, searching through this portal may be more efficient if one is only interested in already digitized items.