This system violated the basic principle of American democracy -- the principle that values and rewards each man on the basis of his merit as a man. It has been un-American in the highest sense because it has been untre to the faith that brought thousands to these shores even before we were a country. Today, with my signature, this system is abolished. -- from President Lyndon B. Johnson's address to mark the signing of the Immigration and Nationality Act, Liberty Island, 3 October 1065 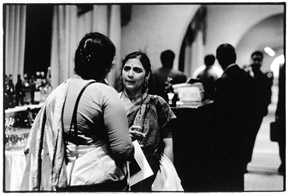 The Immigration and Nationality Act, popularly known as the Hart-Cellar Act, was signed into law on 3 October 1965, abolishing the "national origins" quota system established in 1924. In era of civil rights awareness, the system, which heavily favored northern Europeans, had come under increasing attack as being racially biased. The Immigration and Nationality Act established a new quota system of 20,000 from each country with a total of 170,000 immigrants allowed each year and allowed exemptions for reunifying families. Further, it gave preference to people with professional skills needed in the United States. This led to a dramatic increase in the number of immigrants from all over South Asia. In many ways the new immigrants were very different from the pioneers who began coming at the turn of the twentieth century. The early immigrants had come primarily from the province of Punjab. The immigrants after 1965 came from all over South Asia. Women had accounted for only about one percent of early immigration, but after 1965 the numbers of men and women were roughly equal. While most of the early immigrants had been military men and farmers, the majority of the new immigrants, like most of the students who had come in the early years, were scientists, engineers and doctors. The early immigrants preferred the Pacific Coast, while immigrants coming after 1965 settled all over the United States. In California, where early settlers were concentrated in the Sacramento, San Joaquin, and Imperial Valleys, the post-1965 group havealso become a force in Silicon Valley and major urban centers, emerging in recent years as successful entrepreneurs and professionals. Communities have built temples, gurdwaras, and mosques, established cultural centers, and have achieved notable economic success.

On American campuses second- and third- generation South Asian Americans have made their presence felt. Classes on South Asia that had four or five students twenty years ago, now draw ninety to one hundred students. These students are demanding more classes on culture, history, and language that reflect a South Asian heritage they are rediscovering. Fifty courses on South Asia were offered at the University of California Berkeley, in the spring of 2001, including courses in sociology, anthropology, ethnic studies, environment, economy, political science, history, and language and literature courses in Hindi, Tamil, Punjabi, Urdu, and Sanskrit. In the University of California system alone, six endowed chairs and two lecture endowments in South Asian studies have been established, funded almost entirely by members of the South Asian American community.

Interest in South Asia is at an all-time high, and the community which began in California as a small number of determined men from the Punjab, the brief piece of history captured in this exhibit, now numbers over 1,600,000 people in the United States, representing all parts of South Asia and all walks of life.