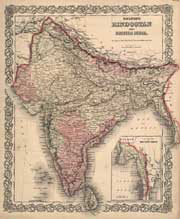 Indians began coming to California in the 19th century. One Indian adventurer was reported in the gold fields as early as 1857. The beginning date of 1899 for the exhibit is arbitrary, chosen to coincide with an article that appeared in the San Francisco Chronicle, 6 April 1899, announcing the arrival of four Sikhs in San Francisco. The ending date, 1965, marks the signing of the Immigration and Nationality Act, popularly known as the Hart-Celler Act, which lifted "national origin" quotas and began a period of vigorous immigration from South Asia. The exhibit focuses on California, leaving out much material from British Columbia, Oregon, and Washington, though major events that had profound effect on the entire immigrant community such as Komanata Maru have been included. 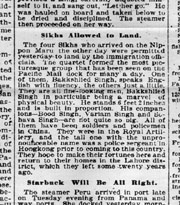 The question of what to call the immigrants from India has never had a simple answer. At the time the early immigrants from India arrived in the United States, the term "Indian" was used for Native Americans, so immigration officers referred to the immigrants as "East Indians." Once in the United States, they were referred to collectively as "Hindus", meaning people from Hindustan, another word for India, which in retrospect seems like a misnomer since true Hindus, that is, followers of Hinduism, made up only a tiny portion of the early immigrants. In recent years, the term "Asian Indians" has been generally preferred. Given the bewildering number of variations possible, throughout this catalog I have referred to immigrants from India as simply "Indians", since no confusion with Native Americans in this context is likely. I use a regional name when a group is sufficiently homogeneous, as in the case of "Punjabi farmers" or the "Punjabi-Mexican" marriages. After the creation of Pakistan in 1947, I refer to them asIndians or Pakistanis as appropriate, and I have used the broader designation "South Asians" for the exhibit title to include immigrants from both countries. Equally challenging is the question of what to call people of European origin in the United States. In this catalog I refer to them as "Americans" if native born, as "Euro-Americans" if they are immigrants, and as "white" in any context where race is emphasized. 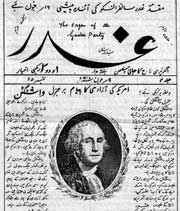 A word on the different transliterations of the Urdu word gadar, which translates into English as "revolution." Early transliterations of the word often show, using gh to transliterate the uvular "g" in Urdu to distinguish it from the simple velar unaspirated "g", which they transliterated as g, therefore, ghadar. Other variations on the older spelling with gh such as ghadr and ghaddar represented different authors' pronunciation of the word, the first eliding the final short "a" and the second germinating the middle consonant - Suzanne McMahon, curator