Their confidence in their own ability to make good and the hope in the success of their endeavor, made them look forward to the future; and by dint of perseverance they have, in the course of only a few years, changed their status from that of common laborers to that of farm operators, farmers, independent businessmen, and even employers. -- R .K. Das, Hindustani Workers on the Pacific Coast

Chapter 3: From Laborers to Landowners 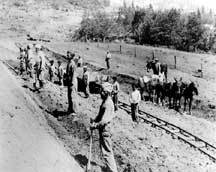 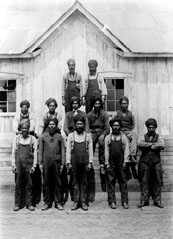 Indian immigrants went to work in the lumber mills of British Colombia and Oregon, helped build the Western Pacific Railroad lines, and found work in factories or iron foundries. But since most of the immigrants were skilled in agriculture, they were naturally drawn to the farming areas. "They had been used to farming since their childhood," says R. K. Das. "The farming opportunities in California offered an irresistible temptation to them. Moreover, practically all of them have been owners of farmland and homestead in India. The spirit of freedom gained from the ownership of land is a dominant feature in their life. When California offered the opportunity to them to lease land or even to buy it, they moved southward."

The similarity of the California landscape to Punjab gave a sense of homeland to this unfamiliar world. Puna Singh describes his first impression of California. "On arriving in the Sacramento Valley, one could not help but be reminded of the Punjab. Fertile fields stretched across the flat valley to the foothills lying far in the distance. Most of the jobs available were agricultural and I found many Punjabis already working throughout the area." 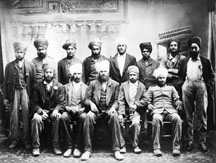 The immigrants moved around California in work groups, appointing a "boss man" who spoke English to contract work for the group. They began in the Sacramento Valley, working in the orchards, vineyards, and sugar beet fields, moving on to the vineyards and citrus groves of the San Joaquin Valley in central California, and finally to the Imperial Valley in the south working in the cantaloupe and cotton fields. The work groups kept up informal contact with each other throughout the state. The Punjabis quickly built a reputation as efficient farm laborers and competent men of business. Almost immediately they established relationships with bankers and lawyers, getting loans and filing court cases, in their new setting. Their success was partly because of their hard-working Punjabi background and perhaps also because of their previous experiences with British colonial rule.

In 1920 the immigrants owned 2099 acres and were leasing 86,340 acres of farmland. This land was almost exclusively in the Imperial and Sacramento Valleys, where they grew large volume cash crops like cotton and rice, but also crops that required intensive farming like peaches, grapes, pears, apricots, almonds, beans, peas, corn, potatoes, celery, asparagus, and lettuce.