Sikh troops returning via Canada from the Diamond Jubilee celebration of Queen Victoria reported it was possible to make as much as $2.00 a day in the mills and on railroad construction in Canada and the United States, nearly ten times the average wage in Punjab at the time. The lure of opportunities abroad attracted many Punjabis and J. S. Grewal estimates that in "the first decade of the twentieth century the percentage of net outmigration from the central Punjab rose from about 1.5 to nearly 4.75."

Punjab was among the last regions in India to come under British rule. After the death of Aurangzeb in 1707, Moghul sovereignty in thePunjab began to weaken, and in 1801 Ranjit Singh, who had succeeded a local Sikh chieftain in 1792 at age twelve, declared himself Maharaja of Punjab. Though he ruled in the name of the Sikh Gurus, his cabinet and administration included members of the Muslim, Hindu, and Sikh communities. From his stronghold in Lahore he expanded his territory northwestward to include Kashmir and Jammu and southward towards Sindh.

Much of the revenue of the province went to maintaining his army of 40,000 foot soldiers, 12,000 cavalry, and substantial heavy artillery. He admired disciplined Western warfare and employed French generals and strategists, chief among them Ventura and Allard, to train his own army, which compared favorably with the British troops in India at that time. British historian J. T. Wheeler writes that had "he flourished a generation earlier, he might have conquered the whole of Hindustan." 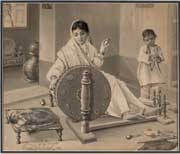 But with the British advance in India, the era of independent kingdoms was coming to an end and Ranjit Singh's kingdom, built largely on the foundation on his own personality, character, and genius, did not survive him, but gradually collapsed under the weight of warfare between rival chieftains. The British were not slow to exploit the opportunity provided by contested leadership in Punjab. After several failed attempts to overcome the region by military force, the British finally achieved a decisive, but costly, victory and annexed the Punjab in 1849.

British fears about the volatility of the region led at times to harsh repression, but on the whole Punjab fared better under the colonial system than many other parts of India. After initial misunderstandings about the system of taxation, British demands for tribute were comparable, and sometimes even lighter, than those of previous rulers. The British also took pride in building roads, bridges, canals, and railways in Punjab, leading to increased mobility and a strengthened economy within the region. The Sikhs, in particular, gravitated to the Indian Army and police force, coming into contact with the outside world and learning of opportunities overseas. As Gurinder Singh Mann points out, the climate of the time encouraged exploration.

The long-distance trains, the Bombay Mail and the Howarh Express, passing through the heartland of the Punjab had already brought the port cities within therange of the Punjabi imagination. The stories about the expansiveness of the Californian landscape could serve as the required push to decide taking up the boat -- journey to Trailia and Mirkan. Money was available to buy the ticket, and those who were driven by a sense of adventure and, of course, the hope of economic advancement availed themselves of the opportunity. 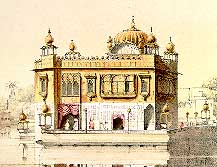 Most of the Indian immigrants to the western United States in the late 19th and early 20th centuries hailed from Punjab, though a very small portion came from Oudh, Bengal, and Gujarat. About 85-90 percent of these early adventurers were Sikhs and another 10 percent were Muslims. Hindus among them were rare. This mix did not reflect the composition of the population of Punjab at that time -- roughly 57 percent Muslim, 30 percent Hindu, and 13 percent Sikh -- the disparity explained, in large part, by the Sikhs' willingness to take advantage of opportunities toexplore the greater British Empire. Punjabi culture suited the emigrants from Punjab for the challenges they would encounter in North America, stressing "land ownership, courage, willingness to take risks, and some justification of violence to avoid defeat and submission."