As the Komagata Maru approached Canada at William's Head the press came alongside the ship in launches and Gurdit Singh told them, "We are British citizens and we consider we have a right to visit any part of the Empire."

Chapter 5: Voyage of the Komagata Maru 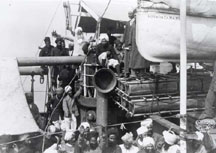 In Canada the same forces were at work. The Canadian government wanted to avoid conspicuous conflicts with the immigrants, because incidents could draw unfavorable attention to the "

Indiaquestion" and the risingtide of resistance to British rule on the subcontinent. But pressure from Canadian laborers in British Columbia who wanted to stop immigration from Asia was intense. Khushwant Singh says theVancouver exclusionists sang in the streets:

To Oriental grasp and greed
We'll surrender, no, never.
Our watchword be "God save the King,"
White Canada for ever.

Responding to this pressure, Canada passed highly restrictive immigration laws and after 1907 immigration from India slowed to a trickle; 2,623 Indians entered Canada in 1907, while in 1908 only 6 were admitted.

But Indians argued that as British subjects they should have the right to immigrate to any country in the British empire. To test the Canadian exclusion law and to point out its injustice, a wealthy Punjabi businessman named Gurdit Singh chartered a Japanese ship, the Komagata Maru, to take 376 British subjects -- 24 Muslims, 12 Hindus, and 340 Sikhs -- to Vancouver. The British kept Canadian authorities informedabout the ship's progress. The Komagata Maru reached Vancouver on 23 May 1914 and was denied entry. The ship remained docked in Vancouver Harbor for three months. Indians in Canada and the United States collected thousands of dollars to provide food and aid for the ship's passengers and to wage a legal battle for their admission. But the exclusionists carried the day, and provincial authorities in British Columbia finally ordered the ship to leave Canadian waters. The Komagata Maru departed from Vancouver on 23 July 1914. 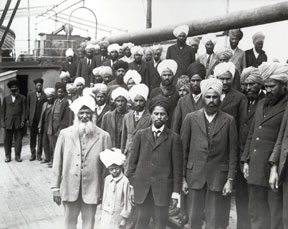 In route back to India the passengers were not allowed to disembark in Hong Kong or Singapore. When, on reaching Calcutta, their ship landed at the station of Budge-Budge at the mouth of the Houghly River, British authorities expected to find the passengers disillusioned with Gurdit Singh, who had led them on the unsuccessful venture. Instead they found a group embittered nationalists, loyal to Gurdit Singh and furious with the British government. The authorities tried to force all the passengers to depart immediately for Punjab by waiting freight train and in the violent confrontation that followed a score of men, both Indian and British, were killed and many Indians were imprisoned. Gurdit Singh himself spent a number of years in British prison, but lived to see independence for India, and, in September 1951, he wrote to Nehru asking that a memorial be set up to the passengers of Komagata Maru. The memorial was unveiled on 1 January 1952 in Calcutta. Gurdit Singh died 4 July 1954 in his ninety-fifth year.