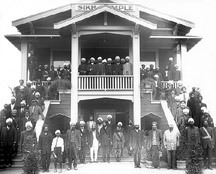 The Stockton Sikh Temple became the center of religious life for the Sikhs and of social and political life for all the Punjabis in California, who gathered there several times a year. Nand Kaur from Yuba City described this as a convention, "a three-day sequence of meetings, with a meeting of the 'Indian Lady Education Society' or 'Doaba Educational Society' on the first day, a Ghadar Party meeting on the second day, and then the celebration of the birthday of the tenth guru, Guru Gobind Singh, on the third day." One woman remembered the Stockton Temple as the place she played with the Khan children each year when they came to pick peaches. 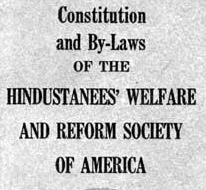 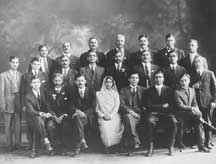 Of central importance to the immigrant community in California was the Pacific Coast Khalsa Diwan Society, dedicated to promoting the education and welfare of the immigrant Indians. The Society was largely responsible in1915 for the construction of the two-story wooden Sikh Temple in Stockton, one of the first religious centers for Indians in the United States. R. K. Das provided a contemporary description of the Stockton Temple.

“On the ground floor is a hall for meetings, also several rooms and a residence of the priest. Upstairs is a prayer hall. There is an altar at one end of the hall on which is kept the Granthor sacred book containing the precepts of the Gurus or the leaders of Sikhism. The hall is decorated with rich carpets on the floor, a rich canopy above and pictures and texts on the walls. In this hall scriptures are read and expounded by the priest twice daily.” The Sikh Temple also maintained a free kitchen that was open to all, as well as facilities for the care of elderly Sikhs.

In Punjab, the gurdwaras were centers of worship for the Sikhs, but they were also meeting places where secular concerns were discussed and dealt with. The Stockton Sikh Temple followed this model and Punjabis from all over California gathered there several times a year. At these gatherings the men would meet together in a group and the women would sit separately, according to Indian custom. However, this division had a more practical basis for the California Punjabis. While the men all spoke Punjabi, the women chose English as a common language since some of the wives were Mexican, some Punjabi, and some white. The Sikh Temple became a center of Gadar Party activity after the 1917 trials and hosted many social and political events, such as the lecture by Sarojini Naidu, who spoke there during her 1929 tour of the United States. 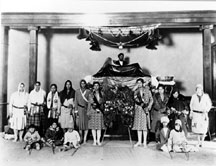 Muslims, who made up about 10 percent of the early immigrant group, kept up their religious practices in the United States in various ways, meeting as groups in people’s homes or rented halls, often traveling great distances to be together at special times. In 1919, California Muslims formed the Moslem Association dedicated to social improvement, Americanization, reformation, and education. Partition and the creation of an independent India and Pakistansharpened awareness of religious identities among the California immigrant community and the Muslims came to feel the need for a permanent Islamic place of worship. In May 1947, the first mosque in California was constructed at Fifth and V Streets in Sacramento. 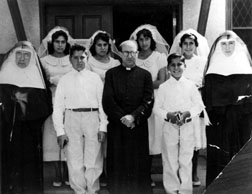 After Punjabi men began to marry Mexican women, Catholicism also became a factor in the community. Usually the husband would retain his religion and the wife would retain hers, but the children would be baptized in the Catholic Church, often attending catechism classes and receiving confirmation. Godparents for the baptisms were drawn from the Punjabi-Mexican couples. These practices meant the Mexican wives could remain in the Catholic Church and continue to take communion.